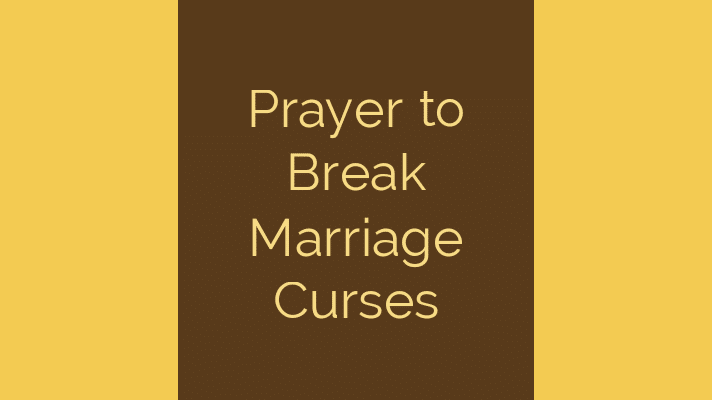 Curses hinder a considerable number of Christian women from getting married. Just because you are born again doesn’t mean that marriage curses won’t affect you. You need to break marriage curses in your generation.

Many innocent Christian women helplessly try to get married to no avail because of these curses. The big challenge is that most Christian ladies either don’t believe that curses are holding them from getting married or they don’t know how to break them.

In this article, I will guide you step by step how to break all curses that are hindering you from getting married.

The Origin of Marriage Curses

Before you embark on breaking marriage curses, it is important to know how and why they form.

Marriage curses originate when you sin against God and when you willfully impose them on yourself. Sometimes these curses are inherited from parents and grandparents.

God ordained marriage to be a holy institution. He put rules in place to ensure the marriage bed is kept pure. Whoever breaks the holiness laws of marriage invites a curse over her life.

Read Also: Why can’t I Find a Man to Love Me?

Repenting of the sin one commits is not sufficient to break marital covenants.

Sleeping with a man you are not married to is fornication. Fornication is a sin that has a covenant attached to it. You become one with the man you sleep with.

If you repent after fornicating, your sin will be forgiven but the covenant you made with the man you fornicated with will remain.

In the eyes of God, you are married to that man. That is why if you try to get married to another man, God opposes you.

Other wicked sexual engagements carry curses apart from being sin. You may have repented of your dirty past but the covenants you made are still holding you from getting married.

Sometimes it is your parents who committed sin and got the curse. But since you are their blood, you automatically inherit the curse.

If your parents gave birth to you through fornication, you are a product of a defiled union. In the eyes of God, you are defiled.

In such a case, you will need to repent of the sin of fornication and spiritually disconnect yourself from your parents so that the curse on their marriage doesn’t affect you.

Sometimes Christian women impose marriage curses on themselves. Many do so by speaking negatively about their own marital life.

The devil deceives many Christian women into believing lies about marriage. With their minds corrupted, they end up uttering curses on themselves.

A Christian woman who believes that there are more women in the world than men and that getting a husband is hard will surely have a hard time finding a husband.

Some Christian women keep professing that men don’t like them because they are slim. In the end, their confession becomes their possession.

There are many false philosophies about marriage that Christian women believe. The false teachings lead innocent women to impose marriage curses on themselves.

How Marital Curses Stop you from Getting Married

You may wonder why every time you date a man, he cheats on you. It is because that is what you asked for.

Curses operate by twisting our reasoning. When your reasoning is twisted, you will make decisions that consistently keep you single.

You may even know those decisions are wrong but for some reason, you can’t avoid making them.

I find it interesting how such ladies manage to convince themselves that living with a man is hard yet they have never tried it.

Others avoid men because they believe men will use them and dump them. Those beliefs are normally unfounded.

That is how curses stop innocent Christian women from getting married.

How to Break Marriage Curses

Breaking marriage curses is simpler than you imagine. The beauty of it is that you don’t have to know all the curses that are holding you back. Provided you know the process of breaking them, you will get out of them in no time.

The following are the steps you need to follow to break marriage curses:

1. Acknowledge that you are a Sinner

Since marriage curses originate from sin, you have to repent of the sin that caused them before breaking them.

Even if the sin that caused the marriage curse was committed by your parents, you must repent of it as if you are the one who committed it.

Read Also: How to Know if a Godly Man likes you (3 Strong Signs)

The Bible is clear about how forgiveness of sin works; you must start by confessing that you have done evil.

2. Ask God to Forgive your Sin

God knows all our sins but He only forgives us when we ask Him for forgiveness. Therefore, don’t assume that God forgave you of the sins you did when you have not verbally asked Him to forgive you.

Asking God to forgive you verbally is a testimony to use in the future in case the devil comes to condemn you.

If you can remember the day you repented of the sins you did, it will be easy to put off the devil with his condemnation against you.

3. Ask God to have Mercy on you

We don’t deserve to be set free from curses but God sets us free from them in His mercy. Therefore, ask God to have mercy on you.

Breaking any covenant is expensive but Jesus paid the price for you. All you need to do is ask God to count your price on the blood of Jesus.

It is through His mercy that He will pull you out of the covenants you entered.

4. Enter a new Covenant with God

When God takes you out of the evil covenants, you will need to get a new covenant in their place. That is why after asking for God’s mercy, you need to covenant yourself with God.

5. Thank God for delivering you

Once you are in a covenant with God, everything is set. God will lead you step by step until you get the godly man who is to marry you.

At that point, give praise to God for delivering you. When you are grateful to God for His deliverance, He will make your deliverance whole.

The more faithful you are in following God’s leading, the quicker you will get married. It can literally take a few months from being single to being married.

I have witnessed a woman go from single and not dating to married within seven months. God will take you at the speed you can handle.