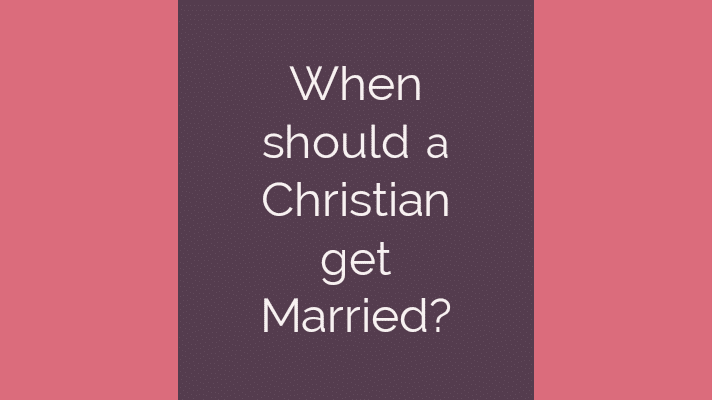 Christian marriage age is a hot topic. The Bible does not explicitly state when a Christian should get married but that does not mean it doesn’t offer an answer.

In some Christian circles, age is believed to be just a number while in others marriage is only permitted when you get to a given age.

Who is right about the correct age for a Christian to get married?

That is what I’m going to share with you in this article. Step by step I will explain to you God’s desire when it comes to the age to get married.

Christian Marriage Age: Does it Matter?

Age is certainly a number but is it ‘just a number’? Certainly not!

Marriage is for a man and a woman who have left their father and mother and chosen to become one. The very definition of marriage according to the Bible gives us the first clue about the age to get married for Christians.

For a girl to become a woman, age plays a role but it is not the only factor. This means that age is a number but not ‘just a number’.

What matters more is the value that the age of a girl carries. A 19 year old girl who has spent five years learning about marriage through sound teaching is certainly better in matters marriage than a woman at 30 who has not learned about marriage.

Though the woman at 30 will most likely have a better understanding about life in general, the 19 year old girl will do better in marriage.

The assumption we all have is that an older woman has more knowledge about marriage than a young girl. That is most likely the case but not always the case.

God gives training to every girl to become a wife. If a girl goes through the training successfully, at whatever age she completes it, she will be ready for marriage.

Why some Christian Women get Married Late

A good number of Christian women get married when they are over 25 years old. It is considered the ‘okay’ age for getting married but that is what society believes.

Reality is different from what society believes.

For a Christian girl to get married past 25 years old, either of the following two things would have happened;

If a Christian girl feels that getting married before 25 is too early, God will respect her choice to wait. Some Christian girls may want to be done with college first before they get married.

For whatever reason a Christian girl postpones settling down in marriage, God will allow it even if it is not the best decision.

Biologically speaking, a girl is most productive in her late teenage years and early to mid-twenties. That means if a girl wants to have children, she should consider getting them while she is at her optimum.

The Bible confirms this theory by emphasizing on ‘enjoying your youth with the wife whom you love’. Youthfulness is like smoke; once it’s gone, it will never return.

But majority of girls never understand the wisdom of the verse that King Solomon wrote.

Another common cause of Christian girls getting married late is their failure to prepare for marriage. This is the reason why most Christian girls who desire to get married never get married. It has nothing to do with christian marriage age.

Preparing for marriage biblically is a process. It takes conscious effort to get it right. The common claim Christian girls who delay to get married give is the absence of godly men to marry them.

But the reality is that godly men are only looking for godly women who will make good wives. Unless a girl has passed the test of becoming a wife, God won’t send a man her way.

In such circumstances, how a girl is aligned for marriage plays a major role in determining when she gets married rather than her age.

In the Book of Job, the Bible states that ‘It is not only the old who are wise’. Being older gives you greater opportunity to be wise but that does not mean that you can’t get wisdom when you are young.

Finding a husband is a major hurdle that takes great wisdom and understanding to overcome. That is the reason why I wrote this step by step guide book to help ladies pray to God for a husband.

For most girls, their desire to get married is heavily dependent on finding a man who will make them feel loved and appreciated.

When should a Christian get Married?

A christian should get married when the following conditions have been considered:

1. Marriage Age in the Country

Every country has a minimum age set that girls can’t get married before they get to it. As Christians, we are called to obey the governing authorities.

Therefore, as a Christian girl, don’t try to get married earlier than what the constitution of your country states. In most countries, the minimum age for marriage is set at 18 years.

If that is the case in your country, make sure you plan to get married when you are over 18 years old. The christian marriage age must be in agreement with the law of the country.

If you are within the legal age to get married in your country, the second factor to consider is your personal choice. The christian marriage age is subject to your will.

Do you generally prefer to get married early or late? I advocate for getting married as early as you can after getting to the age allowed for marriage.

Read Also: How to Find a Godly Man to Marry (The Easy Way)

Getting married based on other people’s timelines is a disaster if you are not personally interested in it. You are the one getting married. It makes sense to decide when it happens.

That means that if you get to 25 when you are yet to get married, marriage becomes an urgent matter.

3. The Opinion of Loved Ones

If you are unsure of the age to get married, you can go with the recommendation of your loved ones. Since they are your loved ones, their advice will obviously be for your good.

Since you know your level of maturity better than anyone else, it is up to you to know what advice from your loved ones makes sense and which one does not.

Did you know that you can ask God when you should get married? Yes, you can ask Him but be assured He won’t give you an answer you expect.

God knows the person who is to marry you. If you ask God when you should get married, He will let you know the conditions you are to fulfill before you get married.

How long it takes you to fulfill those conditions will be up to you. God will wait for you to meet the conditions and then He will bring you a man.

In the end, you will still have to decide how soon you want to get married. God will help you know when you are ripe for marriage but it is up to you and your partner to decide when you want to have your wedding.

The wisest thing to do is ask God to prepare you for marriage. Once you are fully prepared for marriage, you will get married at whatever age you will be.

So, what is my final word on this topic of the age a Christian should get married?

If you have a desire to get married, work hard to get married. Ask God to give you a spouse. After you get a spouse from God, settle down.