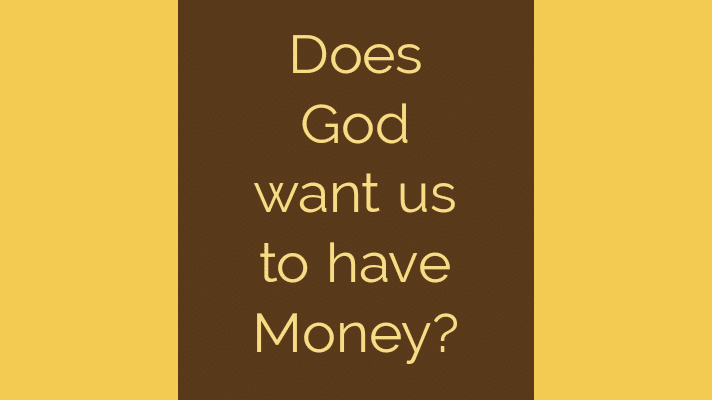 Does God want us to have money?

There is no denying that money plays a major role in our lives. The topic of money is evident in the Bible both in the Old Testament and the New Testament.

This means that God has an opinion concerning money. Jesus, on several occasions, directly addressed issues to do with money.

At some point He was asked to pay tax.

Surprisingly, there is no record of Jesus ever using money to get something. The closest Jesus came to paying money to someone was when He was asked to pay taxes. But then He asked Peter to go get money from the mouth of a fish and pay tax for both of them.

While it may not raise eye brows why Jesus never directly paid money, there is a great lesson about money we can learn from that.

Does God want us to have Money?

Jesus once said that a person cannot serve two masters; he will love one and hate the other. Then He concluded by saying a man cannot serve God and money.

From this teaching we see that money is called a master. And that is true.

Read Also: Does God want me to Stay in a Loveless Marriage?

Jesus never used money directly to get anything because He too is a master. Jesus is a greater master than money.

By Jesus refusing to use money to get anything, He showed that He is a greater master who doesn’t need to bow to the lesser master (Money).

But still money helped propel the gospel of Christ. This does not mean that money is evil. Rather, it means that money serves Jesus but Jesus does not serve money.

The contention for superiority between Jesus and money happened on several occasions in the Bible. When the devil came to tempt Jesus, he offered Him all the kingdoms of the world, which in simple terms is the wealth of the world.

Jesus, being a greater master than money, turned down the offer.

The last contest between Jesus and money happened when Judas betrays Jesus for thirty silver coins. Jesus completely refused to surrender to money and so it eventually caused His betrayal. But of course we know Jesus resurrected.

What do all these revelations have to do with God’s will for us to have money?

I began by bringing out this picture so that you understand the position of money in our lives.

God’s Ordained Position for Money in our Lives

When God allowed the introduction of money into the lives of men, He ordained money to be a servant to us. But then the devil corrupted the systems of the world so that money would have more power than men.

Today, the world is captive of money. Money has become a master that directs so many of the activities in the world.

Most wars, if not all, have been fought because of money.

Jesus came to restore all that we had lost; including our authority over money. We are required to be like Jesus when it comes to money matters; that we will not serve money but that money will serve us.

For us to get money to be a servant to us, we must grow our faith to the point where we can get whatever we want without money.

When it came to feeding the five thousand, Jesus tested His disciples. They immediately mentioned how feeding all the five thousand people was a problem because they only had two fish and five loaves of bread.

But then Jesus proved to them that He was a greater master than money by feeding the five thousand people until there was surplus.

God’s will for us concerning money is that we may make it our servant so that if it refuses to serve us we can still get what we want.

Does God want us to have Money?

God wants us to have money in abundance but the money must be is the position of a servant to us. The Bible speaks favorably about having servants.

In the book of Proverbs, the Bible says that it is better to be a nobody and have a servant under you than pretend to be a somebody and have no food.

God Himself has billions upon billions of angels who serve Him. Since we are created in God’s image, we too should have servants under us.

As children of God, we must subject money to our rules.

Saying ‘make money a servant’ is easy but making it happen is an uphill task. For money to be your servant, you must come to a place where you can live comfortably without needing money.

We use money most of the time to buy food and clothing, seek medication when we are ill and pay bills.

Taking these three areas as an example, you can make money your slave by finding an alternative source of food and clothing that doesn’t need money, never falling sick and having no bills to pay.

Don’t get me wrong…

Clearly, Jesus had no problem getting food without money.

These levels may seem too high to achieve but they are simpler than you can imagine. See this article for more on the same.

Lastly, the problem of paying bills was cleverly handled by Jesus when He confessed that birds have nests and foxes have holes but the son of man has no place to lay His head.

Was Jesus unable to get a bed to sleep on? Of course not.

But Jesus chose to spend His nights praying rather than sleeping. He spent other nights at the house of His disciples teaching them. Who wouldn’t want Jesus to spend a night in his house?

Does God want us to have Money? God’s Favor in Place of Money

When you ask God for money, He will prefer to give you favor. Favor is how God gives people money. When Jesus was passing by, Zacheus the tax collector gladly welcomed Jesus to His house.

Remember there is no record of Jesus having a house of His own. Zacheus welcomed Him in His house because of the favor of God that was upon Him.

Jesus was so good that people would beg Him to come and spend time in their houses. Remember Jairus who asked Jesus to go to his house and heal his daughter.

Remember when Jesus visited the home of Lazarus, Martha was busy in the kitchen making food for Jesus.

We are also told of the woman who anointed the feet of Jesus with the alabaster oil, which was expensive.

All through the ministry of Jesus, favor was upon Him and people were begging to have a chance to serve Him.

Read Also: 3 Benefits of doing the Will of God

That is what God wants for us too. Instead of us looking for money, God wants to mold us so that we are so attractive to people of the world to the extent that they will seek to serve us.

Once we get to that level, we won’t need to look for money because people of the world have it. They will use it to serve us.

Does God want us to have money?

I hope you now have the answer.

Until next time, goodbye!

1 thought on “Does God want us to have Money?”