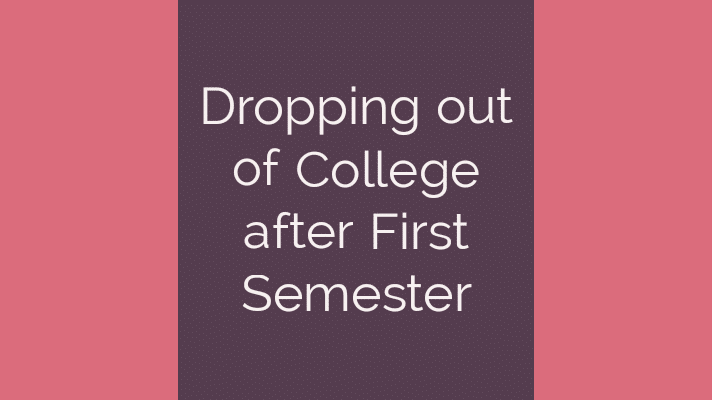 Dropping out of college after the first semester is scary. Not only are you unsure whether it is the right decision but also you know that getting it wrong will screw up your life.

I was in that very situation that you are in several years ago. I had only spent a few weeks in the University when I began thinking of dropping out.

Many things were going against my expectations. My first days in college were a nightmare. On one hand, I was feeling things were hard because it was a new experience but on the other hand I felt it was a sign of terrible things to come.

I had no idea what to do neither what to expect. I felt lonely. If you want to read my full story of how I was feeling and how I eventually dropped out, get it here.

Today, I want to brief you on key things you are to expect if you plan to drop out of college after your first semester.

I’ll be fair enough to share both the good and the not so good experiences you should expect. Then I’ll conclude by helping you know whether dropping out of College after your first year is a good idea or not.

Dropping out of College after First Semester

It is no surprise that a considerable number of the billionaires of today dropped out of college. I know anyone can draw any conclusion he wants from this information. Despite that fact, I’ll draw my own conclusion and back it up with my firsthand experience.

Just before I dropped out of college, just as you are doing, I looked for information. I wanted to be sure the decision I was making was informed.

From the tens of articles I read on Google, I don’t remember any of them mentioning that dropping out of college makes one proactive.

I only learned that I had become proactive when I dropped out of College. I don’t have any scientific studies to base my argument on but I will explain to you the simple concept. After all, you are dropping out of college; you should not care about scientific studies.

Read Also: Do you Regret Dropping out of University? Read this

When you are in college, subconsciously you know that you will get a job after graduating. The subconscious belief gives you a sense of security which in turn makes your mind relax.

But when you drop out of college, the sense of security vanishes. Your mind panics and produces ‘juice’ to help you survive. I don’t want to say your mind produces adrenaline because I’m not sure if that is true.

This concept explains why a good number of people who drop out of college willfully end up becoming super rich. Constantly, their minds tell them to work hard for them to be safe. In the process, they become stinking rich.

If you will drop out of college, expect your mind to be stimulated. You will constantly feel a sense of urgency which is a good thing in helping you work hard.

For someone who is in school, doing business is an option but for a drop out, business is a life line. Guess who will stick with business even when it hurts? Of course you know.

Stigma after Dropping out

Everyone who meets him will see him as a failure. No matter what explanation he gives, people won’t want to listen. That is exactly what happened to me.

I dropped out of college to pursue blogging. I loved blogging (I still do) and I knew I could make more than a full time income from it.

But despite blogging being a technical field, no one wanted to believe that I was a bright person. Everyone assumed that I was a dumb student and that is why I dropped out of University.

I remember telling a certain girl, a friend of mine in college, that a bright person is bright whether he goes to school or not. She barely bought into my explanation that I was bright but I had dropped out of school.

If you are going to drop out of university, be prepared to walk around with a banner on your forehead reading ‘I am a failure, hit me!’ Majority of the people you will meet, who will realize that you dropped out of University, will shame you for it.

Read Also: If you don’t have any Friends in College, read this

Feeling Lost after you Drop out

No matter how solid your decision to drop out of college is, when you drop out, you will feel lost. Taking away the structure that college puts in our lives will always bring imbalance.

It is not surprising that a good number of people who deal with dropping out of college often struggle with depression.

In my case, I wasn’t particularly depressed but I had most of the symptoms of a depressed person. Read my full story and see for yourself how horrible life can become once you drop out of college.

Before I dropped out, I knew I was going to learn blogging and make a living from it. But things never turned out to be as straight-forward as I thought they should have been.

I lived through the darkest days of my life.

Losing the structure that formal education provides ushers in the quarter-life crisis.

That stage is hard!

Therefore, as you plan on dropping out, expect a period of great uncertainty. You will wake up one day feeling great for being a ‘free atom’ but the next day you feel so low that you almost can’t get out of bed.

The never ending emotional roller-coaster will nag you for quite some time. If you are not careful, your life can be completely ruined by the confusion that arises after you drop out of college.

Thinking of going back

Right now you might be cursing college but after you drop out, you will be surprised that at times you will be thinking of going back.

The pain and confusion you will experience after you drop out will make you question your decision to drop out. You will need to constantly remind yourself why you dropped out and why it was a good decision.

There is no time limit on how long the thought of going back to college lasts. It heavily depends on how you fare with life after dropping out.

Though I had a hard stand against college, there were times I wanted to go back to college and be done with my degree. I felt it would be easier to deal with college life than the stress I was going through after dropping out.

Learning blogging was hard. I was starting blogs but they were not taking off. On the other hand, there were people nagging me daily to go back to college. They were pointing out my struggles in blogging as reasons why I should quit and go back to University.

The Advantage of Dropping out of College after First Semester

Dropping out of college after the first semester has huge advantages although they are rarely mentioned. I dropped out during my freshman year so I know.

When you drop out of University after only one semester for whatever reason, you save yourself time and a ton of money. Let me explain…

There are many people who go to college when they have no idea what they want to do with their lives. They only go to college because it is the next step after high school.

In college, they drag themselves to classes and barely survive in their assessment tests. After wasting four years of their lives mindlessly studying, they come out to the real world and realize they are ill-equipped to face life.

These are the guys who end up blaming the government for not employing them yet they have degrees. In actual sense, these guys only have the certification but they have no meaningful skill.

On the other hand, some clever students realize during their first semester in college that they are in college without a plan.

Immediately, they decide to drop out and figure out their lives. Instead of dragging on mindlessly, they choose to only do what they know is meaningful in building their lives.

If you want to drop out of college because you don’t see the point of being in college, that is a great thing. You can always go back when you see need.

By dropping out early, you are saving yourself three years and a huge amount of money. The time you would have wasted in college pursuing a degree you don’t care about can be invested in learning a skill that will pay you back in future.

In my eBook where I narrate my experience of dropping out of college, I mention how I began working out to keep fit and do away with bad habits that I had.

A few years after dropping out and focusing on other areas of my life, I had greatly improved compared to my peers. Eventually, I found a good reason to go back to college and it was only at that time that I enrolled.

I have everything to thank my 18 year old self for refusing to go to college without a purpose. I could have been a statistic of college grads who don’t have a job.

Therefore, by all means, don’t feel guilty to ‘take a break’ from college. If you can figure out a way in which the degree you are currently pursuing will help you, then don’t drop out.

But if you feel you are in college because it is the next step in life, take a break and figure out your life.

Should you drop out of College after First Semester?

I know I have shown you both sides of the coin and you are probably confused which is the winning side. Don’t worry. I’ll show you one last thing you can do to settle your college problems.

You are young and life is confusing. I know you don’t want to screw up your future, which is a good thing. But did you know that you can actually screw up your life while trying not to screw it up?

You may drop out of college with the hopes of making your life better but you end up being worse than if you stayed in college. You can also stay in college and become miserable than if you dropped out.

The sad reality is that everyone’s case is unique. There is no ‘one size fits all’ solution.

I have done my best to explain in detail what might happen to you if you stay in college and if you drop out but obviously I have not captured everything.

I also don’t have much background information about you, which may lead me to give you a wrong conclusion. That is why I recommend you get a real human being who is specialized in dealing with the exact type of dilemma you are in to give you an answer that perfectly suits you.

A professional who helps people stuck between decisions is called a Life coach and you can hire one here.

You can also read further about who exactly a life coach is, how much his services cost and what exactly you should expect from him in this other article.

With that said, I believe I have done my part in helping you find a way out of your dilemma. I now take my leave.