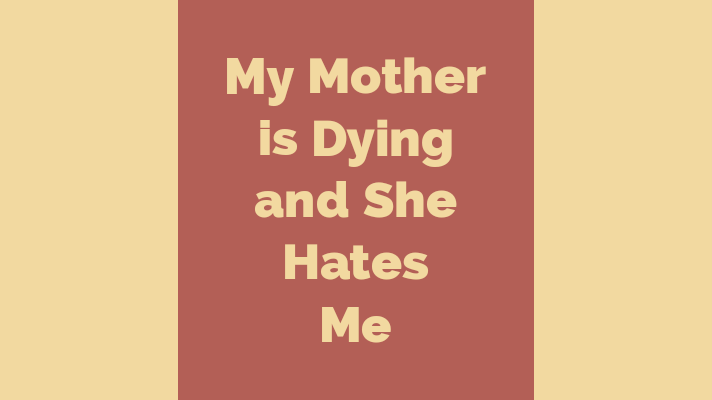 It is sad if your mother is dying and she hates you. Once your mother dies, you will never have an opportunity to reconcile. The broken relationship you have with your mother may cause you lifelong trouble.

In this article, I’m going to share with you what you need to do immediately. The recommendations in this article will help you have peace when your mother dies.

My Mother is Dying and She Hates Me: What to do

Confess the wrong you did to your Dying Mother

It is obvious that the grudge that your mother has against you began from an incident. If you know where the grudge started from, see the wrong that you did and confess it to your mother.

Confessions are powerful. By acknowledging that you did wrong to your mother, you give her a chance to forgive you.

Read Also: My Mother Died Today; What do I do?

It is easier to forgive someone who confesses that he has done wrong than one who denies the wrong he has done.

Make sure that you analyze the incident that caused the wrangle you have with your mother well. Avoid pointing a finger at her even if she did wrong to you.

The critical thing at this time is to get your mother to forgive you so that you may have peace after she dies.

Compress your confession so that you don’t take much time to give it. Chances are that your mother doesn’t have the patience to listen to the painful past you have had with her.

If your relationship with your mother is so bad that you can’t even talk, you can put your confession in writing.

Still, remember to keep your confession as short as possible. A written confession is easier to ignore if it is too long.

During your confession, make sure you capture the most important points. Even though many things between you and your mother might have gone wrong, there is one thing that is responsible for the entire grudge.

Other grudges you have heard with your mother are a side effect of the main cause of you grudge. Make sure you identify the main grudge and confess for it.

It is unusual for a mother to hate a child for no reason.

If your Mother is Dying and She Hates you, Ask for Forgiveness

You don’t have to use many words when asking your mother for forgiveness. Saying ‘Mom, I’m sorry’ is enough. In fact, the shorter your request to be forgiven is, the more genuine it will appear.

Many words have a tendency of appearing faked. People who lie use many words to cover their lies. If you genuinely want your mother to forgive you, a short apology is enough.

If your dying mother is in a condition that you cannot talk to her, then do the apology in writing. Writing is also good if you are afraid of talking to your mother about the disagreements you have with her.

If your dying mother is angry at you to the point that she doesn’t want to see you, write your apology and ask someone else to take it to her.

In such a case, you can simply say ‘Forgive me mom, I love you!’

You can buy a greetings card with the writings to give your mother a chance to look at it. How the writing of your apology is presented matters a lot.

In delivering your apology, try and do it in the morning. In the morning, the mind of your dying mother is fresh and she is more likely to pay attention than later in the day.

Also in the morning, your mind is fresh enough to handle the response your mother gives you wisely.

My Mother is Dying and She Hates Me: Her Response

If your mother dies, her response will remain with you for life. You won’t have another chance to ask her for clarification.

There are three responses you can expect from your mother when you ask her to forgive you for the wrong you did to her.

This is the response you obviously hope for. Unfortunately, there is no way of guaranteeing a positive response from your dying mother who hates you.

You can only work to increase the chances of a positive response from your dying mother and nothing more.

It is wise to say as little words as possible after your mother forgives you. Chances are that if you talk a lot with her, you will say something wrong and cause her to become angry at you again.

If you apologize to your dying mother and she remains silent, don’t bother. The most important thing is for you to deliver your apology to her.

If she got your apology, even if she remains silent, you have done all you could. The rest is her problem.

If your dying mother is silent after getting your apology, leave her alone.

You don’t have to get a response from your dying mother for you to be at peace. Peace comes when you give a genuine apology.

In case of a negative response from your mother, don’t feel guilty. Asking for forgiveness from her was not a mistake and will never be.

You did the right thing by asking her to forgive you. The negative response from her is her internal problem and not your problem.

If your dying mother chooses to remain angry at you even after you asked her to forgive you, it is not your problem.

Read Also: Preparing for Mother’s Death: What to do before Mom Dies

Your responsibility is to make sure you don’t make the situation worse by saying something stupid. Keep your mouth shut.

It may be tempting to justify your position and why she needs to forgive you but don’t. If you really need your dying mother to consider your apology, let another person talk to her about it but not you.

If your Mother is Dying and Hates you for no Reason

If your dying mother hates you for no reason, don’t apologize for anything. It is a mistake for you to apologize for wrongs you did not do.

Your dying mother may have her own demons disturbing her. Don’t let her demons take away your peace. Do what you know is right and stick to it.

Your mother may be frustrated because her life is coming to an end but don’t let frustration ruin your life.

If you know you are innocent, remain silent and let your mother say whatever she wants to say. Don’t reply even if you feel a strong urge to reply.

It is a critical time when your mother is about to die and you are not in good terms with her. Be careful with your mouth.

If you are not sure with what to say, remain silent. It is better not to say anything than to say something that you will regret for the rest of your life.

If you know the reason why your dying mother hates you, make sure you ask her for forgiveness. If you have nothing against her and you know her anger towards you is unfounded, stick to your lane.

Do what is right and hold your peace.