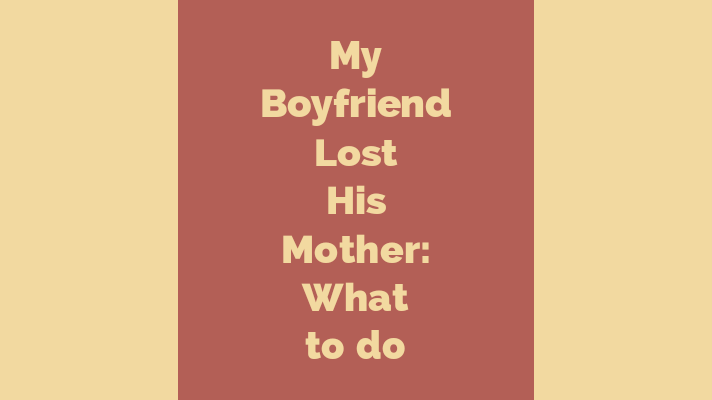 My boyfriend lost his mother, what do I do?

When your boyfriend loses his mother, it can be very challenging for you to handle him. Grieving comes with strange behavior.

Your relationship with your boyfriend will be put to the test and it will take wisdom from your side to sustain the relationship.

The weird behavior your boyfriend exhibits after losing his mother needs correct interpretation to avoid causing disagreements in the relationship.

In this article, I will address three key steps you need to take to help your boyfriend who lost his mother.

These three steps will help you keep your relationship with your boyfriend strong after he lost his mother.

My Boyfriend Lost His Mother

1. Your Presence is Important for your Grieving Boyfriend

Most of the time when we think about comforting a grieving boyfriend, the first things that come to mind are the things we can do for him.

Read Also: 3 Consoling Gifts to Buy Someone who Lost a Mother

But in reality, the most important thing you can offer your grieving boyfriend is your presence. Your boyfriend already loves you and seeing you around is comforting to him.

You can make a small adjustment to your schedule so that you are available for your boyfriend a bit more than usual.

Being available to your boyfriend means you need to connect with him physically and emotionally. A grieving boyfriend is most likely confused about himself.

Your presence will help him remember that he is a leader to you. Subconsciously reminding him that he is your boyfriend will give him some form of stability.

If he wants to talk to you about his mother who has died, give him your ear. A grieving boyfriend will want someone to open up to. Who else is fit more than you?

When you make yourself available for your boyfriend who has lost his mother, make sure you pay attention to the little suggestions that he gives.

It is so easy to irritate your grieving boyfriend.

He may also make weird requests which you need to say no to.

Therefore, make sure you are alert and you know exactly what to do and what not to do.

Allow your grieving boyfriend to have time alone to mourn. If he asks you to give him space, give it to him.

A grieving boyfriend may want to be left alone, which is normal.

As his girlfriend, understand that grief is a personal journey and even the closest person may not understand sometimes.

Your grieving boyfriend requesting to be left alone does not mean he has lost interest in you. It is simply his mind being too preoccupied with the sad news of the death of his mother.

2. Urge your Boyfriend to do Basic Activities

A grieving boyfriend may immerse himself too much in grieving that he forgets to do basic activities. It is your duty as a good girlfriend to urge him to take care of himself.

Since you are the closest person to him, your boyfriend will be more willing to do the basic activities if you urge him to.

Read Also: Effects of Death of a Parent on Marriage

He is also your boyfriend which means he has a responsibility to ensure he keeps himself in good state for you.

Urge your grieving boyfriend to eat sufficient food. Make for him meals that you know he loves and urge him to eat.

Ensure that the meals are organic and contain vitamins, carbohydrates and proteins.

During the grieving process, your boyfriend needs to have strength. That means he needs to eat foods rich in carbohydrates.

The food he eats will help him be in a good state to mourn the death of his mother.

Also, urge your boyfriend to keep himself clean. Ensure he takes a bath every day, brushes his teeth and puts on clean clothes.

If he struggles to keep up with a cleaning routine, you can help him out. Take his clothes to the laundry, clean his room and arrange it neatly for him.

Still under the basic activities to urge your boyfriend to do, make sure he gets sufficient sleep. Sleep is important for your grieving boyfriend as it helps him rejuvenate the energy he has lost during the day.

If he can’t get sleep, urge him to do relaxing activities to calm down. You can listen to music with him to help him find peace and get sleep.

3. Affirm your Love for you boyfriend who Lost his Mother

You can take him for a nature walk and talk about love. Don’t be afraid to bring up the topic of love with your boyfriend even in his grieving state.

But make sure you don’t force it on him if he asks you to change the topic.

Inversely, don’t shy off if your boyfriend wants to show you love.

Most of the time it is assumed that a grieving boyfriend wants nothing to do with intimacy and love. But some boyfriends are capable of showing love to their girlfriends even when they are grieving.

In fact, your boyfriend may be more inclined towards matters of love more when he is grieving. Don’t limit him with your expectations.

What to Avoid Doing to your Boyfriend who Lost His Mother

1. Forcing yourself on your Boyfriend

Being available for your grieving boyfriend is good but some boyfriends may want to be left alone. If your boyfriend asks you to leave him alone during the grieving period, allow him the space.

Forcing yourself on your boyfriend will irritate him and cause trouble in your relationship. If you call your grieving boyfriend and he doesn’t pick his phone, don’t bother him with many calls.

As I mentioned earlier, grieving is different for each person. Your boyfriend may be the type of people who prefer to grieve on their own rather than having others around them.

2. Trying to Cheer your Boyfriend who Lost His Mother

You may be around him and even do amazing things to him but he remains gloomy. It is normal for people who are grieving to be gloomy.

Don’t do things for him with the aim of cheering him up. At this time, your boyfriend may not appreciate you as much as he normally does; understand that he is going through a difficult time.

Read Also: Feeling Depressed after Losing a Mother: How to Recover

Serve him as we have discussed above but do not expect him to be cheerful. If he tells you he will be fine, believe him.

Don’t nag him with questions if he doesn’t want to answer them.

3. Saying Yes to Weird requests from your Boyfriend who Lost His Mother

Your boyfriend might have requested you for a given favor with no success but after he lost his mother, he wants to take advantage of the sympathy you have for him to get his favor.

It takes courage to say no to your boyfriend when he is grieving but you must do it if you are not ready to do whatever he is asking you to do.

Don’t be afraid of hurting the feelings of your grieving boyfriend. Even though he is grieving, it is his responsibility to treat you with dignity.