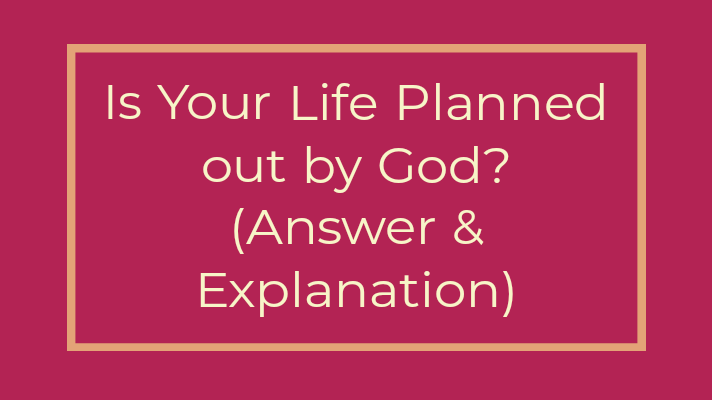 God is the creator of all that exists. Before creating all that is created, God made a plan on how all things are supposed to work.

Before He made man, God made a garden that provided an environment that was conducive for man.

When you study nature, you will see the perfect balance that supports all creation. Trees depend on animals, animals depend on insects, insects depend on water and many other connections.

All the intricate connections clearly show that God is a master planner.

Read Also: Why God established the Idea of Family

But of course the big question is did God plan how the life of every person would turn out?

To answer this question, I’ll need to explain a few concepts first. That is what this article is about.

Just as every other created thing, the life of man was in the plan of God. God had different reasons for creating man. The two major reasons were that He may have people to fellowship with and that man would take care of what God had created.

God gave man free will but He instructed man on what is best for him. In God’s infinite wisdom, He knew that man would fall for the lies of the devil. In His great love, He included a redemption plan in the plan He had for the life of man.

Before the devil showed up to ruin God’s perfect plan for man, man had a wonderful life of fellowship with God.

When the devil showed up, God hoped that man would be able to resist the devil. God had taught man to obey Him and had given him all good things.

Despite God’s best efforts to teach man to resist the devil, man gave in to the lies of the devil.

Had God planned for man to fall for the lies of the devil?

God knew man would fall and had prepared a redemption plan beforehand but in His heart, He desired that man would overcome the devil.

Just because God knew that man would fall from His plan doesn’t mean that God planned it. The same thing happened with the devil’s rebellion; God knew it would happen but in His heart He didn’t want it to happen.

In our very own lives, we can tell that we will die one day. In our hearts we don’t want to die but then we know what reality holds. This is why people write wills before they die.

Likewise, God’s will was written and it included a redemption plan for the life of man even though God didn’t want man to fall.

God has been working ever since the fall of man to restore him back to the original fellowship. As we have discussed earlier, God didn’t want man to fall but it was inevitable.

God sent His only son Jesus Christ to redeem man. The redemption that Jesus brought is subject to the will of men.

If a man rejects the redemptive message of Jesus, he can’t be saved.

Does this mean that God has planned for some people to accept the redemptive message of Jesus and others to reject it…?

God has provided the gospel of redemption with the intention to save all men. But just like the case of the fall of man, it is inevitable for some men to reject the message of salvation.

It is written in the Bible that Jesus knew from the beginning who would believe in Him and who would not. He also knew who would betray Him.

Despite His knowledge of all that was to take place, He still chose Judas to be among His disciples and preached to those He knew would not believe Him.

This shows us that God’s desire for us is that we may all be saved. Even when He knows a particular person won’t accept salvation, He still brings the gospel to him.

The Plan of Man for his Own Life

God has a plan for every person but an individual can decide to come up with his own plan for his life.

Read Also: Where does God want me to Live?

It is possible to partially follow God’s plan and your plan. Actually, this is the most common way most of us live.

Jesus is an example of a person who allowed the full plan of God to manifest in His life. Jesus emphasized on several occasions that He only did what He saw the Father in heaven doing.

We are called to be like Jesus; to lay aside our plans and yield ourselves to the plan of God. Since no man can live without planning for his life, our plan must be to follow God’s plan.

Is my Life Planned out by God?

Now to the big question…

Your life is planned out by God. Before He formed you in your mother’s womb He knew you. But then it is up to you to create a conducive environment in your life for the plan of God to prevail.

The devil is constantly seeking to deceive you to leave alone the plan that God has for you. Just as he deceived Eve to eat the forbidden fruit and destroy God’s plan, he is seeking to convince you to turn against God and perish.

Don’t give him a foothold.

Seek to align yourself to God’s plan for your life. If you have been following God’s plan half-heartedly, it is time to pursue God’s plan with your whole heart.

Read Also: 3 Benefits of Doing the Will of God

The plan of God is what I talked about earlier in the article. Now that we fell from it, the current plan of God for our lives is to redeem us to the original plan.

Let your daily activities create room for the plan of God to be established in your life. Don’t dwell on saying God already knows how your life will turn out even though it is true.

Instead, focus on making yourself better for God. In the end, you will find joy and fulfillment when you live according to God’s plan.

May God give you understanding!