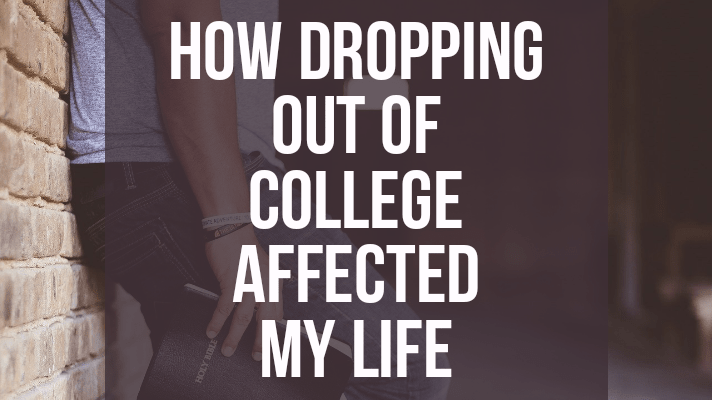 In this article, I intend to talk about both the positive and negative effects of dropping out of college that I experienced.

If you are weighing options whether to drop out of college or stay, consider reading my full story of how I dropped out of college to get a clear picture of what to expect.

I have divided the effects that dropping out of college had on my life into three; effects on my career, my social life and my psychology.

Effects on My Career

When I dropped out of college, I quickly learned that my chances of getting a job were nearly zero. We all know that having a college degree is a necessity to get most jobs.

Some jobs are even stricter; they require that you have a college degree for you to apply. If you have no college degree, your application is not even considered.

After dropping out of college, my hopes of ever getting a job died. I could only get casual jobs which I didn’t like.

Read Also: Is a 22 Year old too Late to go to College?

In my story of how I dropped out of college, I narrated how I struggled to make money during my first days after dropping out of college. I also wrote extensively on the different jobs I got and how they turned out.

Eventually, I learned that dropping out of college meant bidding formal employment goodbye.

If you are thinking of dropping out of college, be ready to forego formal employment for good. Your chances of landing a job when you have the college dropout badge are next to zero.

With dead employment hopes, the only viable option was to freelance. A few months after I dropped out of college, I went full time into freelancing.

I thought it would be easy to get freelancing jobs but it turned out to be tough. I had a laptop and I loved typing though my grammar was pathetic.

I tried several article writing gigs with no success. It was a devastating blow to me. I had dropped out of college, I couldn’t get any job and freelancing was not working. Seeing that my options were running out, I decided to push harder the freelancing pedal.

I managed to land a freelancing job but it only lasted four days. The job I found was too hard for me to handle. Life was hard.

Dropping out of college will leave you with few options of making money. One of the few options you will have is freelancing.

Freelancing is a good way of making money but it has its own downsides. Starting out in freelancing is not easy.

In case you are planning to drop out of college, be ready to go into the freelancing space.

3. Start of my Blogging Career

With writing articles for other people giving me a hard time, I decided to start my own website and write articles for myself. That is how I began my blogging career.

Since childhood, I dreamed of being a pilot. If becoming a pilot would not work, I would become an engineer. But after I dropped out of college, I realized I loved writing.

I quickly fell in love with writing blog posts and I have never looked back ever since. I have written several eBooks and I’m more than contended to do writing as my full time career.

Dropping out of college shifted my career inclination from getting employed to freelancing and eventually to running my own website.

At first, I thought dropping out of college had negatively affected my career but after seeing the success potential in creating my own website, I am grateful that I dropped out of college.

Effects on my Social Life

1. Disagreements with my Dad

My dad was a University lecturer when I dropped out of college. I was sure it would be hard for him to let it pass.

Sure enough, we disagreed and had several bitter arguments over a period of three years. Our relationship became so awkward.

From my perspective, I was seeing him as an old fashioned person who was not only refusing change but was also stopping anyone from going with the change.

You can read more about the bitter arguments and wars I had with my dad in my eBook about dropping out of college.

Eventually, we agreed with my dad and our relationship was restored but that only came after experiencing fireworks for several years.

If you drop out of college, you will almost always have to disagree with your parents especially if they are old parents who believe in having a college degree.

I wrote a guide to help young people who have dropped out of college break the news to their parents with as little drama as possible.

I lost a considerable number of friends after I dropped out of college. Most of the friends I lost were those friends who kept nagging me to go back to college.

I had my strong reasons why I dropped out and no matter how clearly I explained those reasons, they never listened.

Seeing that much explanation was leading nowhere, I decided to distance myself from them. We had been close when I was still in college but after I left, the distance between us grew until the friendships died a natural death.

The other reason why I lost several friends was the change in mindset.

If you drop out of college, expect to lose a number of friends. It will happen naturally. If your friends won’t be understanding enough to accommodate your new status, your friendship will die.

After losing most of my friends, I remained on my own. I spent most days locked in my room and I had no one to share my struggles with. It was a tough period. I’ve narrated the details in my eBook.

Related Post: The Best Time to Drop out of University and have no regrets

The stigma that dropping out of college brings will push you into isolation. All of a sudden, people who were supportive of you turn against you.

Every time they see you all they can talk about is college. Day in day out they ask when will you return to college. It is annoying!

At that time, I had lost my friends and I had many psychological struggles as well. I hoped that by sharing my issues I would get empathy but all I got were annoying guilt statements.

I closed my heart to everyone and I kept to myself everything that was going on in my life.

It is no strange to hear of some young people who fall into depression because of being stigmatized as college dropouts.

It is rarely mentioned but the truth is that college teaches students to have a fixed mindset. The fixed mindset is ideal for people who fancy employment but if you want to do business and become rich, you must learn the growth mindset.

I never knew there was anything called the growth mindset until when I developed it.

After I dropped out of college, I spent time reading self-help books and watching self-improvement videos on YouTube. Overtime, the knowledge I gained shaped my mind.

Dropping out of college has great benefits even though they are not talked about as much as the drawbacks.

With no fear in taking risks, I find myself advancing faster in life than my peers. Where most of my peers hesitate, I pass without much thinking.

Closely related to learning risk taking, I conquered fear. I no longer worry about the economy and many other factors that worry most ordinary people.

It took me months preparing for it and when I eventually did it, I realized I was fearful for no good reason. Since then, my fear went down big time.

I am grateful that dropping out of college had such a positive effect on my life.

Those are the major effects that dropping out of college had on my life. Since my life has become better after I dropped out of college, most of the effects I have mentioned are positive.

It all depends on how you view dropping out of college.

I don’t know your current position with respect to dropping out of college but if you drop out, these are some of the effects you can expect.

Until next time, cheers!