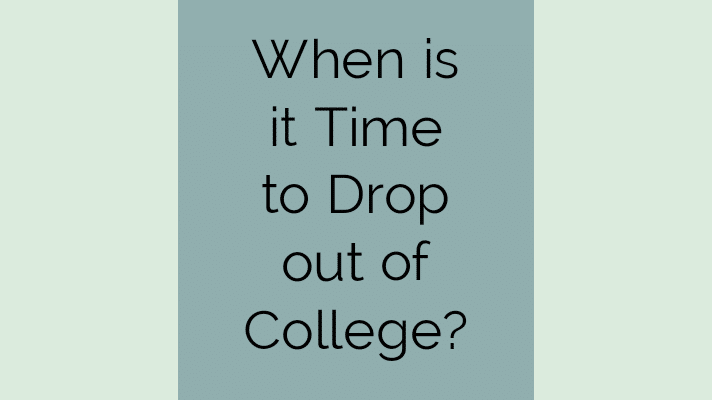 Deciding when is the best time to drop out of College is hard. I have been in your situation before. After my first year in the University, I was sure I wouldn’t make it to my fourth year.

I knew I had to either change my course or drop out. Dropping out was the easier option since I hated everything about University life.

But even after I decided that I would drop out, I found it hard to decide when to drop out. You don’t have to struggle with the same dilemma because I am here to help you pick the best time to drop out of college.

If you prefer to learn from other people’s experiences, you can read my full story of how I dropped out of college in this eBook.

When is it Time to Drop out of College?

Dropping out of College Early

When I talk about dropping out early, I mean dropping out within your first year in the University. I have written an in-depth article that explains what you should expect if you drop out as a freshman, which you can read from the link I’ve provided.

Dropping out of University early has its benefits. One of them is the fact that you will save time and money. Another is that you will have a bigger window of opportunity to go back to college in case you realize dropping out was not a good idea.

Since I dropped out of college after my first year, I’m more inclined towards dropping out sooner rather than later. However, I know that the best time to drop out heavily depends on the reason why you want to drop out.

In my case, I dropped out simply because I never saw the point of being in the University. It was a great idea to drop out and figure out my life. The earlier I would do it, the better it would be.

But for someone who is dropping out because of health issues, that is a different case. In such a case, depending on how severe the health condition is, it may be best to drop out immediately.

Since I don’t know the exact reason why you want to drop out, I will only use the basic reasons that cause many students to drop out.

If you are struggling because of finances, you can talk to the admissions office and take a break until you find the funding you need. It is not wise to drop out if the only problem you have is financing.

One big drawback of dropping out of college early is the risk of making a rash decision. Dropping out of University in your first semester may mean you are simply reacting to the change in environment.

Related Post: Want to Drop out of College to Start a Business? Read this

There is usually a considerable degree of confusion and struggle associated with joining University. If you read my full story of how I dropped out of University, I narrate how my experience during my first few days was.

Ideally, you should be able to overcome the resistance to adjust to University life easily. If your situation doesn’t get better after spending a considerable time in College, that is when you can contemplate dropping out.

But still, dropping out early might prove to be a rash decision you will regret.

Dropping out of College Late

If, for example, you want to drop out of University because your parents have refused to pay tuition fee, you can find a sponsor to pay your fee so that you won’t have to drop out.

College education has its benefits. And because it has benefits, it means it is not easy to attain it. There is a considerable degree of difficulty involved in getting a University degree.

Dropping out of University because of the hardship involved in getting the degree is a bad sign. Everything else in life that is worthwhile has a price tag.

If you take some time to think through your decision to drop out of University, you minimize the chances of dropping out just to avoid the hardship of attaining a University degree.

By delaying your decision to drop out of college, you build your endurance, which is helpful in life.

The sad truth about decisions is that the longer you wait before making them, the less satisfying the eventual decision will be.

The more time you take before making a move, the more resources you waste. You may end up dropping out of college after having spent a huge amount of money and having wasted a considerable amount of time.

Going back to college as a mature student is not easy.

If you drop out late, you might also prefer to move on with the adult life. You will be old enough. But dropping out early means you are young and not in a hurry to settle down.

The Best Time to Drop Out of College

I have told you both the good and the bad of dropping out of University early and dropping out late but the big question remains; when is it time to drop out of college?

From my personal point of view, it is better to drop out early than late. The room for recovery is bigger when you drop out early.

It doesn’t matter which year you are in, if you are thinking of dropping out of college, don’t wait anymore. Drop out as soon as you can. If it is the wrong choice, you will easily realize it and recover from it.

Are you still skeptical of taking the leap? Don’t worry. My advice definitely does not consider all the factors involved in your specific case. That is why I recommend you hire a professional life coach to help you make a clear cut decision whether you should drop out of University or you should stay.

Remember the earlier you make the decision, the bigger the room to recover you will have in case you make the wrong decision.

You can read more details about who a life coach is, how much life coaching sessions cost and how you can pick the best life coach to help you in this other article.