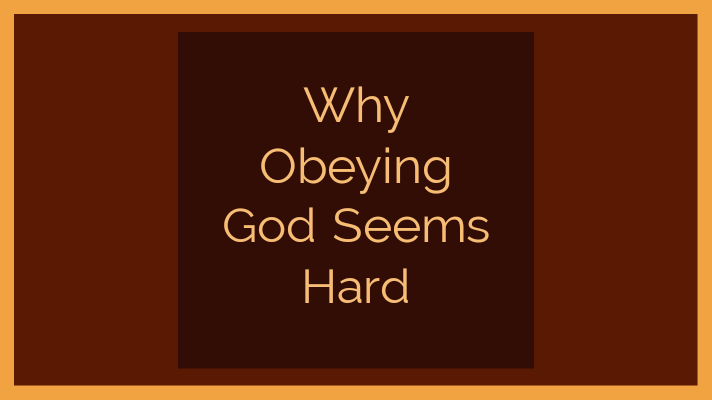 When the topic of obeying God comes up, many Christians cringe. It is one of the statements most believers never want to hear.

Ironically, most Christians want to obey God but somehow it feels so hard. In the end, they give in to disobedience.

This article is an explanation of why obeying God may be appearing hard for you. The aim of this article is not to justify disobedience but rather to help you understand what you are supposed to deal with.

Being human means you don’t know so much especially about the future. The unknown future can easily create anxiety within us.

When God asks us to obey Him, we find it hard to trust that His way is the right approach to the unknown future.

Read Also: How We will Live in Heaven without Disagreements

In the example of Moses and the children of Israel, we are told there was a shorter route that would take them three days to get to Canaan but God asked them to use the long route.

17 When Pharaoh let the people go, God did not lead them on the road through the Philistine country, though that was shorter. For God said, “If they face war, they might change their minds and return to Egypt.” 18 So God led the people around by the desert road toward the Red Sea. The Israelites went up out of Egypt ready for battle.

On the long route that God asked them to use, there was the red sea. Any rational man would tell you that the shorter route was better.

Who wants to waste time on a long route when there is a short route? Isn’t the goal of the entire operation to get out of Egypt and into Canaan as fast as possible?

But then Moses, having been taught obedience through several miraculous signs (remember the miracles at the burning bush) obeyed. (Exodus chapter 4)

He followed what normally would be a terrible choice. God had taught him to conquer the fear of the unknown.

For most of us, getting to a point where we trust that God’s choice about the unknown future is the best is hard. We may say we will obey God but when we get to the real situation, we allow our rational thinking to override God’s instructions.

If you have your own plans about the future, obeying God becomes difficult.

13 Come now, you who say, “Today or tomorrow we will go into such and such a town and spend a year there and trade and make a profit”— 14 yet you do not know what tomorrow will bring. What is your life? For you are a mist that appears for a little time and then vanishes. 15 Instead you ought to say, “If the Lord wills, we will live and do this or that.”

Sometimes God may tell us the reason why something is a better choice at that time. But other times He remains silent about it.

Therefore, be aware that fearing the unknown is an obstacle to obeying God. Try your best to beat it.

There is a popular belief that the things of God are boring. In fact, most people believe that following God limits the fun of life.

Think of fasting, overnight vigils, volunteering in church missions etc They are not fun things to do for an average person. With such an average mindset, obeying God becomes difficult.

Who in his right mind will forego something that is fun in favor of boring stuff? But in real sense, the things of God are more fun than the fun in the world.

How sweet are your words to my taste, sweeter than honey to my mouth!

If you struggle to believe that, there is a distortion in the information you have. God made us to enjoy doing what is pleasing to Him.

But the deceiver has worked hard to make believers to love unethical things over the things of God.

Obeying God has been painted as something that is boring.

Go for a corporate dinner with CEOs and introduce yourself as a servant of God. Immediately, you will get a certain look that is not so appealing.

It is a scheme of the devil to make us disobey God. Anytime you feel like obeying God is boring, know that the devil is whispering lies to your ears.

Obeying God is the sweetest thing for a man to do. Is it not given in Ecclesiastes as the summary of all things, to fear the Lord and keep His commandments?

13 Let us hear the conclusion of the whole matter: Fear God and keep His commandments,
For this is man’s all.

Becoming a Slave of God

God created us with free will. Anytime we realize we are in bondage, our spirits are crushed within us.

Unfortunately, the deceiver has managed to convince many people that obeying God is equal to being God’s puppet.

God is the last being who can make a man His puppet. The devil is the one who makes people his puppets.

The mindset of obeying being equal to slavery makes it hard for us to obey God. We feel like God is only interested in us fulfilling His agenda regardless of what we go through.

Read Also: Financial Fasting for Believers: What you need to Know

But the scriptures clearly state that God is a rewarder of those who diligently seek Him.

6 But without faith it is impossible to please Him, for he who comes to God must believe that He is, and that He is a rewarder of those who diligently seek Him.

We also know that God rewarded Jesus with a name that is above all names because He obeyed Him in all things.

8 And being found in appearance as a man, He humbled himself by becoming obedient to death even death on a cross!

The mother of James and John asked Jesus if her two sons would sit one at his right and another at his left in the kingdom, but Jesus said that was for His father to grant (Matthew 20:20-23).

In the end, the right to sit at the right hand of the father was given to Jesus because it is only Him who obeyed God perfectly.

So, where is the slavery in obedience? Is it not just a campaign of the devil to lure believers into hating obeying God?

Don’t fall for the lies. True freedom is in obeying God.

Not Knowing the Reward

In the same manner, when God asks us to obey, there is a reward for it. But we find it hard to obey God because we assume God will not pay us for our obedience or He will underpay us.

I don’t know where that idea came from but surely it deceives many. If we choose to obey God, our reward is assured. God is no man’s debtor. (Romans 11:35)

In fact, amongst all beings, God is the most faithful in terms of rewarding those who obey Him. If you can trust a fellow human being to favor you just because you obey them, why should you doubt God?

Read Also: How to Forsake everything and Follow Jesus

Are we not employed by companies? Don’t we obey our leaders and in most cases they pay us promptly. God is far more trustworthy than those humans.

At no point should you ever imagine that obeying God is vain. Read through the Bible and see if there was anyone who obeyed God and was not rewarded.

Abraham’s obedience to God made God vow to save his descendants. We all know that Abraham’s descendants were very stubborn but God still found a way to save them because of His promise to Abraham.

The good thing with God is that He has eternal rewards. Long after you leave this world, you will still enjoy the reward of your obedience.

Therefore, strive to know the rewards of obedience and anytime you feel like obeying is becoming hard, refer to them.