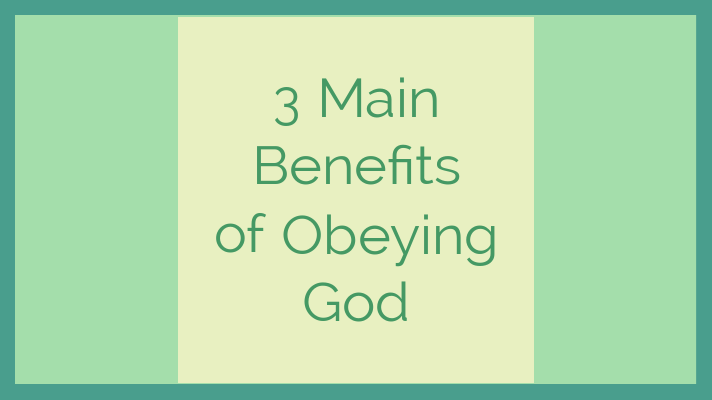 Obeying God is hard at times but it should never be. One of the ways in which we can combat the resistance of obeying God is by learning of the benefits of obedience.

According to the scriptures, there is seed time and harvest time. No one plants unless they have the hope of harvesting. The same is true when it comes to obeying God.

Obeying God is a seed that we plant. Naturally, we expect a harvest. If you don’t know what you stand to gain by obeying God, you will struggle to obey.

The following are good reasons why you should always obey God.

Human beings were created to worship, there is no question about that. Anytime we disobey God, we become anxious. That is because we have moved to a state that in unnatural to us.

Read Also: The Role of Compassion in your Life as a Christian

Anxiety is what God uses to alert us when we go astray. It is clear from the book of Galatians that Peace is a fruit of the Spirit of God.

When we disobey God, it means we are no longer listening to His Spirit. But remember what Jesus said to His disciples in the Book of John. He said He shall not leave them as orphans but He will send them the Holy Spirit to lead them into all truth.

That means on our own, we can’t know the truth. It is also clear that without guidance from the Spirit of God, we will be unsure of what God wants us to do.

In other words, we would fall away if the Spirit didn’t come. And that is very clear after Jesus is arrested. The disciples scatter. They didn’t have peace as Jesus did. They had not yet received the full measure of the Spirit who bears the fruit of peace.

But later on, because they obeyed the words of Jesus to wait for the Spirit in Jerusalem, they were filled by the Spirit on the day of Pentecost.

Likewise for us, our obedience to God brings peace. Our nature is in such a way that we can only have peace when we are certain of the future. And the only way for us to know the future is safe is by following the commands of the Lord.

But for believers, we are assured of salvation provided we do the will of the Father who is in heaven. By obeying the commands of the Lord, we get peace.

Anytime you obey God, there is an assurance of peace. Be encouraged to obey God.

Obeying God means you have fully submitted to Him, you are one with Him. Being in God’s camp is an assurance of salvation no matter what comes.

When God instructed Gideon to go against the Midianites with only 300 people, He obeyed. Reducing the number of soldiers from 32,000 to only 300 is not an appealing move especially if you are naïve like Gideon.

Before Gideon goes forth, we are told of how he gave reasons why He was unfit for the assignment. He was the last born of the least family in his tribe and his tribe was the least of all the tribes.

Read Also: Why Christianity is the True Religion

But because God’s salvation is assured for anyone who obeys, a man like Gideon with a very small army managed to defeat the Midianites. It is hard to fully understand why the Midianites fought against one another but who cares?

The most important thing is that Gideon won the war just by obeying God.

A similar case happened when the Children of Israel came to Jericho. It was a city that had fortified walls. The Lord commanded them to go round the wall once a day for six days and on the seventh day they were to go around it seven times and then give a shout.

They faithfully obeyed the commands of the Lord and the walls came down.

Jehoshaphat also went to war and didn’t have to fight. He inquired of the Lord and when God instructed him not to be afraid, he obeyed. He encouraged his people and the Lord saved them.

Anytime you obey God, there is an assurance of salvation. It doesn’t matter what you are facing. Salvation is assured for all who obey the Lord.

Likewise for us, the more we obey God, the more we rise above all powers of darkness. The devil thrives when believers disobey God.

The best weapon a believer can ever use to defeat the devil is by being in obedience to God. In the old testament, obedience would cause God to protect the Israelites. Anytime they disobeyed, they would be defeated in battle or even be taken into captivity.

The other tribes that would enslave them were symbolic of the kingdom of darkness. In our current times, if you disobey God, you are taken as a captive in the camp of the devil.

If you disobey the command of God to give a tenth of your income as tithe, you become a financial captive of the kingdom of darkness. All other areas of your life will do well but your finances are in captivity.

Jesus instructed us to rely on the Holy Spirit for guidance. Anytime a believer disobeys the instruction, he is taken into captivity. The anxiety and struggles in life come because you are in captivity.

Of course you know how people feel when they are in captivity. Sadly, majority of believers are in some form of bondage for disobeying God.

Being in an abusive relationship is captivity for people who disobeyed God’s instruction concerning marriage. God knows the hearts of all men. If He sees that you are about to get into a relationship with an abusive person, He will warn you.

If you obey, you will be protected from the imminent evil.

Obeying God is critical in a believer’s life. The benefits are great. Do your best to keep God’s commands no matter how little they are. Open your ears and listen to Him.