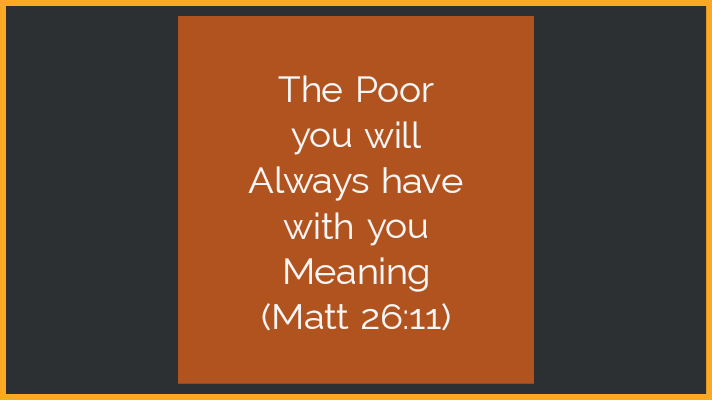 If you are a frequent reader of the Bible, especially the gospels, you must have come across this scripture where Jesus says the poor we will always have them.

Humanly speaking, it is hard to imagine that Jesus would say such a thing. It feels wrong. But Jesus said it anyway and He meant it.

This scripture is not only quoted by Matthew but John too. Because it appears more than once, you can be sure God really wanted us to know that Jesus said it.

But why is such a scripture important to us?

That is what I want to talk about in this article.

The truth of the Scripture

Though the scripture sounds odd, the message that Jesus passes in the verse is true. Poverty has been around for ages and it is not going anywhere anytime soon.

Before you were born, poor people existed and you will die and leave poor people behind. There are thousands of charity organizations specifically working to eradicate poverty but somehow poverty survives longer than all those organizations.

Read Also: How Salvation through the Name of Jesus Works

When Jesus said the poor we will always have, He meant it exactly as it is. No matter what time in history you look at, there were poor people.

Where did Poverty come from?

Now that we know poverty is here to stay, let us know where it started from. Maybe by knowing the origin of poverty we can know how to deal with it.

Poverty is a result of the curses that God pronounced when Adam and Eve ate the forbidden fruit. Before the fall, God was the provider for man. Since God’s provision is perfect, poverty could not exist.

But after the fall, God handed over the responsibility of providing to the man. God told Adam that ‘by the sweat of his brow shall he eat’.

Poverty was born following the imperfections in how the man was working to provide. The role of providing that God gave to man has evolved into the modern day economy.

The economy is far from perfect. The imperfections mean that at any given time, there are people who are rich and those that are poor.

Provided the world is running on an economy made by man, there will always be the rich and the poor.

Why Jesus said the Poor you will Always have with you

Jesus said this phrase for many reasons; both spiritual and physical. I will only point out a few.

To point out the Futility of the Efforts of Man

We have heard time and again that we are saved by grace and not by works. Grace was given to us through Jesus.

At this point, Jesus was rebuking Judas who thought that by selling the perfume and giving money to the poor he would earn God’s approval. Approval from God is only when we believe in Jesus.

The perfume had been used as worship to Jesus. When Judas suggested that there was a better way the perfume could have been used, it made Jesus rebuke him.

Read Also: Even up to Half the Kingdom: The Revelation Behind the Phrase

The famous scripture in Ecclesiastes ‘Vanity of vanities, all is vanity’ brings out this perspective. Helping the poor is a vain thing. No matter how much you help the poor, you will still have them.

But that does not equate to helping the poor being useless. Rather, it means that helping the poor is good only when you are doing it to fulfill God’s command. If you do it to gain approval from God, it is like chasing after the wind.

We have organizations working to eradicate poverty but they never succeed. ‘Eradicating’ poverty in one place only moves it to a different place.

To let us Know How Important He was

Jesus was not to be compared to the poor. The poor were common. In every city, you would find them. But Jesus was not common. He was not found in every city. In fact, it was the only time in the history of humanity that God had been born as a man.

Jesus wanted His disciples to know that what they were witnessing was the rarest occurrence that men could ever see. Jesus Himself was the solution to all the problems of the world; poverty included.

Had Judas known that Jesus was the ultimate solution to every problem under the sun, he wouldn’t have suggested a solution to poverty.

Just by worshipping Jesus, the woman with the perfume was worshipping the solution to all problems humans have ever experienced. To mention poverty in the face of Jesus was mockery.

What should we do about the Poor?

Since the poor will always be with us, it also means that we will always have an opportunity to give.

With this understanding, we see that the poor being always with us is actually a blessing. Through it, we have an endless opportunity to show Jesus how much we love Him.

Go and be a blessing to the poor!