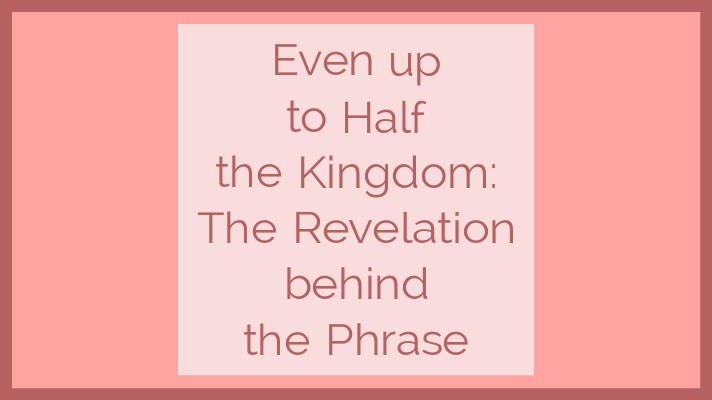 What is special about half of the kingdom that kings swore by it? The Lord revealed this mystery to me in the afternoon while I was worshipping.

Have you ever noticed how eerily similar the story of King Herod and that of King Xerxes are? King Herod took his brother’s wife Herodias to be his wife. When John the Baptist confronted him, he ordered John to be put in prison.

On Herod’s birthday, he organized a banquet and invited other senior officials. Then the daughter of Herodias danced for him and he was pleased with her to a point that he was willing to give up to half of his kingdom to her.

Read Also: The Poor you will always have with you Meaning (Matt 26:11)

On the other hand, King Xerxes looked at Esther and was PLEASED with her (Obviously it was because of her stunning beauty). At that point He stretched his scepter to her, inviting her into his throne room. When she came in, He vowed to give her whatever she wanted even up to half of his kingdom.

Esther requested the king to attend a banquet she had prepared. She then asked the King to bring along Haman whom it is obvious was a friend of the king.

Everything happens in the banquet and Esther tells the King the verdict that Haman had made against all Jews. The king gets angry, takes a break, and when he returns, he ordered Haman to be executed.

Haman, just like John the Baptist, though loved by the king, had to die because a favored woman requested. These two scenarios happen in a banquet. In both cases, the women PLEASED the king.

The requests made troubled the kings but they couldn’t help themselves. They sacrificed people they wouldn’t have sacrificed in their right mind.

So, what is the mystery?

We are the bride of Christ. We are like the women in these stories. One woman asked for a just cause, the other asked for an evil cause but both were granted.

Likewise for us, provided we offer ‘something pleasing’ before our King Jesus, He will be willing to do for us anything whether we are righteous like Esther or wicked like Herodias.

Read Also: The Kingdom of God is like a merchant looking for Pearls

Jesus, under the same intoxication of love, left His throne in Heaven to come and save a ‘bride’ who didn’t even deserve to be saved. We were like Herodias.

After Jesus saved us, He purified us into ‘Esthers’ and now we can request Him to execute Haman and He will do it provided we PLEASE Him.

These Kings were intoxicated by these women because they could sleep with them. Sex is an equivalent of worship in the spirit. Whatever is true about sex is true about worship.

Just as the desire to be with those women made kings kill, so the desire that Jesus has for us drove Him to die on the cross. The biggest secret of those women was their VULNERABILITY.

Even in the natural, nothing turns on a man like a vulnerable woman. Herod could not help but offer the girl who danced for him a crazy offer. King Xerxes became drunk with Esther’s beauty that he repeatedly asked her to say whatever she wanted.

Likewise, Jesus Has also been intoxicated with love for us that He offers to do for us ANYTHING that we ask in His name.

14 You may ask me for anything in my name, and I will do it.

Now, you may be wondering what makes us vulnerable before our King to push Him to grant us a crazy offer. That secret is WORSHIP.

Just as a woman has to undress before going to bed with a man, so Jesus requires us to put away everything and go to Him ‘naked.’ Also, these women pleased their kings with beauty.

For us, Jesus requires us to be pure and worship Him with sweet words. Once we get Jesus’ attention and He sees our ‘beauty’, He will be compelled to come to us. Don’t men go after beautiful girls?

And then when a man sleeps with a woman, he deposits his seed in her. When we worship Jesus intimately, He will deposit in us His seed of Holiness.

If you have ever worshipped Jesus intimately, afterwards, you realized that you didn’t even want to talk to people. You wanted to preserve that sweet mood of worship. It is a parallel of a woman who has become pregnant; she wants to sit in the house all through.

It is obvious to all people that the feeling of sleeping with someone is one of the sweetest feelings someone can have in this life. The same is true for worship.

In all my years that I have known Jesus, nothing pleases me more than worshipping Him intimately. With this revelation, let your faith be elevated.

Worship God knowing just how powerful your worship is. Remember to be pure. Just as men won’t bother about a shaggy woman, so Jesus won’t be drawn to worship that is corrupted.