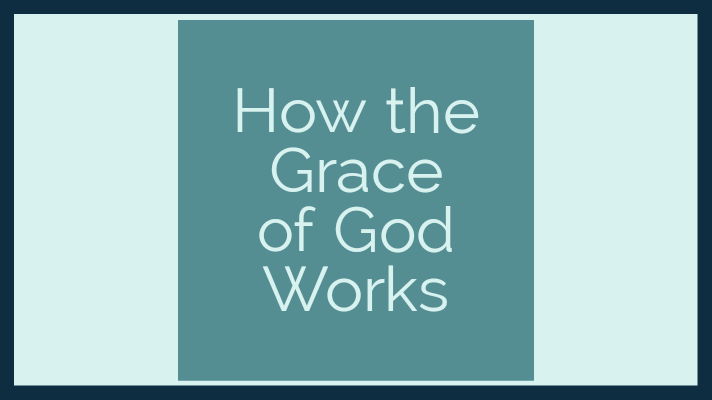 Grace saves us from the law of sin and death but at the same time it is not a license to sin. In the church today, many believers barely have the full understanding of how grace works.

For believers, it is important for us to understand how grace works so that we utilize it properly. The devil has deceived many to fall into sin with the mindset that they are under God’s grace.

On the other hand, others have been deceived into being self-righteous instead of utilizing grace. In this article, I will explain how grace works to the best of the ability God has given to me.

When God created the universe, He put in place laws to govern how everything operates. Those who keep the law are rewarded and those who break it are punished. The laws existed long before man was created.

When man was created, he was shielded from the knowledge of good and evil. He was in a state of perfect grace. All that was required of him was to obey God which is a command and not a law.

Read Also: Teach us to Number our Days (The Revelation Behind it)

A command is an instruction that is given for someone to follow and avoid consequences but a law is a system that seeks to punish those who break it.

When Adam and Eve ate the fruit of the knowledge of good and evil, they moved from perfect grace into the jurisdiction of the law.

Grace is a law that is above all laws. It can override any law in the universe whenever it is necessary. In the case of Adam and Eve, God exempted them from the laws of the universe using the law of grace.

There is no known explanation why God chose to exempt Adam and Eve from the stress of keeping all the laws of the universe and only asked them to obey Him.

For the Angels and all other created beings, they were subjected to operate under the laws of the universe.

The devil failed to keep the laws of God and was punished according to the law. By the time man was created, the devil was already serving his punishment.

When the devil saw that man was put under the law of grace, he became jealous. To him, it was unfair for man to be exempted from having to keep all the laws of God.

In anger, he devised a plan to get man to fall from the law of grace. The only way to do that was by getting man to abuse the only command which God had given him.

From there, we know how things went and man fell from grace.

But unlike what the devil expected, God had a secret plan to restore man back to the law of grace.

The Manifestation of Grace

The laws of Moses were only a drop in the ocean of all the laws that God put in place to govern the universe.

Since men didn’t have much knowledge, God had to break down the laws to them to a level that they could easily understand. Remember men were never created to keep the law. That is why no human being ever kept the law perfectly.

When Jesus came, He was able to keep the whole law. With that, He reintroduced the law of Grace that Adam and Eve had squandered.

By identifying yourself with Christ, you are no longer required to keep the law but only to obey God’s commands. You are taken back to the state that Adam and Eve were in while they were in the garden.

However, since Christ died for all men (John 1:29), all human beings are guaranteed grace but only grace from the law of death (Ezekiel 18:20). That means, if there is a human being who completely doesn’t care about Jesus, he will still be exempted from instant death when he sins.

Such a person will suffer every other consequence of the law except death.

The devil is jealous of the ‘unfair’ treatment that God has given to human beings. Day and night, the devil seeks to destroy men (John 10:10).

Whenever a man breaks the law, the devil accuses the man before God and demands for his punishment. Some of the sins we commit cause God to withdraw certain favors from us (John 9:31).

If a man tattoos his body with a demonic tattoo, the devil runs to God to demand that God withdraws His protection from the man for his demons to enter him. After all, the man has images of those demons on his body, what can God do?

Since the accusation is valid, God permits it. The devil then assigns demons to come and torment the man. God in his love sends His servants to talk to the possessed man to remove those tattoos so that He regains power to protect him.

If the man doesn’t remove the tattoos, he remains bound. But anytime those demons plan to kill the man, God stops them because Jesus paid a price to prevent all men from dying.

The man is saved from death just because God loves Him. It has nothing to do with the goodness of the man. In fact, the man may be a terrible sinner who doesn’t care about the things of God at all but still benefits from God’s grace.

However, time comes when God permits those demons to kill the man. God no longer applies the law of grace to save the man if he strays too far. God might have warned him enough times but he still remained stiff necked (Proverbs 29:1).

The other reason is if the man has been given all possible knowledge to escape the bondage but has refused (Proverbs 21:16).

This is the reason why some people who do very evil stuff don’t die immediately as we would expect.

God is usually trying all means possible to save them. He applies grace to keep them alive while He works on them. The moment God realizes that the evil man is beyond redemption, He withdraws and the devil comes to finish the man.

On the other hand, it explains why good people often receive harsh punishment when they do wrong (Hebrews 10:26). Remember how Ananias and Sapphira died on the spot?

For them, they had experienced a pure move of the Spirit of God. They had been given all possible knowledge to not live in lies but they abused it. God did not apply grace in their case because there was no more chance of redeeming them.

4 It is impossible for those who have once been enlightened, who have tasted the heavenly gift, who have shared in the Holy Spirit, 5 who have tasted the goodness of the word of God and the powers of the coming age 6 and who have fallen away, to be brought back to repentance. To their loss they are crucifying the Son of God all over again and subjecting him to public disgrace.

Peter clearly mentions that Satan had filled their hearts. Also in their case, they were sinning directly against the very God who rescues them from death.

25 If one person sins against another, God may mediate for the offender; but if anyone sins against the Lord, who will intercede for them?” His sons, however, did not listen to their father’s rebuke, for it was the Lord’s will to put them to death.

Have you ever heard a believer say he has the grace to teach the word of God or the grace to heal chronic diseases?

That kind of grace is no different from the one explained above. What normally happens is that there are requirements to perform miracles, teach the word of God, interpret dreams etc.

Read Also: The Purpose of the Law of God in our Lives (Why we need it)

Situations come when someone is in dire need of healing but the servant of God on the scene does not have the qualifications to perform such kind of a healing.

At that time, God grants His unqualified servant a window to tap into a higher office of healing. He then performs a healing even though he is unqualified.

When the devil goes to God to claim that the healing was unfair, God plays the grace card where Christ paid for all manner of diseases.

Grace is fully dependent on God. He decides when to apply it and when not to apply it. The devil can’t steal grace from us; he can only deceive us to abandon it.

No man can live without grace and we know that grace and truth came through Jesus. To Him be all praise and honor forever and ever. Amen!