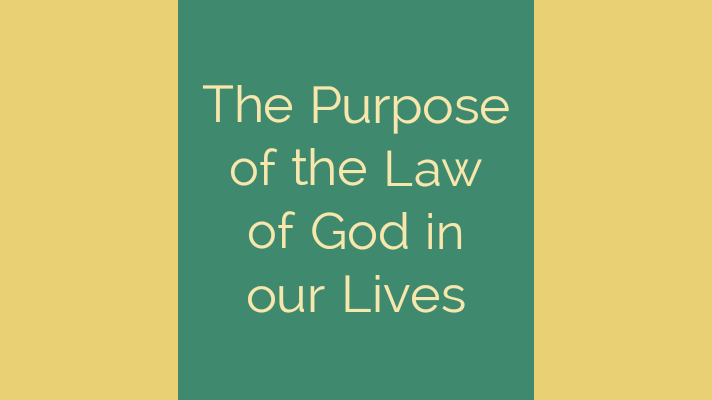 Whenever we hear about the law of God, we tend to brush it off. There is a fine line between the law of God and the grace of God. While we equally need both for us to live a life that is pleasing before God, grace gets more favor than the law.

But missing the law of God is just a bad as missing God’s grace. The law of God has interesting revelations that will completely transform your life.

The law gives structure to everything. Anything that is not bound by law has no structure. God has bound Himself with laws. It is those laws that give Him structure.

When you want to draw a square, you know that you must use four lines. Then those lines must intersect each other at ninety degrees. If you break any of the above laws when you are drawing a square, you won’t get a square.

Read Also: Why did God put the Tree of Knowledge in the Garden of Eden?

The law of God too gives structure just as our earthly laws. When the Bible says that the Lord is gracious and compassionate, slow to anger and rich in love, we understand the character of God.

Since we know from God’s law that He is slow to anger, when we do wrong, we will have the courage to approach Him and ask for forgiveness.

Because the law of God says that He is compassionate, we get comfort because we know God understands our pain.

The Bible is the law of God. Whatever is written there gives God structure. With our faith, we are to believe what the Bible tells us about God for us to get a structure of who God is.

When God gave us the ten commandments, they not only taught us what is good and evil but they also gave us a perspective of good and evil in God’s eyes.

When Cain killed his brother Abel, it may not have looked as an evil act in his eyes. But in God’s eyes, it was a grievous evil.

It is only through the law of God that we get a structure of what is actually good and what is evil.

It was very important for the bones of Jesus not to be broken that even a prophecy was told about it.

The mystery of the bones of Jesus not being broken is closely tied with the law.

Read Also: Why it is Unwise for Believers to Tell Jokes

As I have mentioned above, the law gives structure. In our physical bodies, it is the bones that give our body structure. The flesh only covers the structure of the bones.

The flesh represents grace. Grace covers the severity of the law.

When Jesus came, He lived a perfect life without breaking the law. This meant that it was injustice for His bones to be broken. By His bones remaining unbroken, it was a physical sign that Jesus had not broken the law.

But since Jesus was the one to bring grace to all men, He had to pay the full price for grace.

For the two thieves, their bones were broken because they had broken the law which says ‘Do not steal’.

The Law of God Sets Limits

Most of the time when you get angry at the law, it is because the law is limiting you from doing something you desire to do.

It is true that the law sometimes limits us from doing good. But the law is naturally a limiter. It limits both good and evil.

God, through Moses, set a law for the kings of Israel not to gather too much wealth nor marry many wives.

When you become a king, gathering wealth is easy. Marrying many wives is also easy. God put a law to limit kings in these two areas because He knew that if they were not limited in these areas, they would easily be drawn away from Him.

Read Also: How to Never Fall Sick Again as a Believer of Jesus

When King Solomon came to power, he violated these two limits that God had set. King Solomon might have thought that He was wise enough to break those limits and still avoid being drawn away from God.

But as we know, King Solomon was drawn away from God when he violated the two limits that God had set for the kings of Israel.

The limits that the law of God sets for us, even in what may seem good for us, are meant to save us from being drawn away from Him.

It is our duty as children of God to humble ourselves and abide by the limits that God sets for us.

When God limits how much wealth we can gather, He knows what much wealth will do to us. If we abide by His law, we save our own lives.

The Law of God in your Life

The law of God gives structure to your life. Without God’s law, you don’t have life. A fulfilling life is one that is governed by the laws of God.

The limits that the law of God sets in your life will keep you from being drawn away from God. This is why God is strict when it comes to entrusting us with wealth, power and life partners.

God had to train Joseph for a number of years before entrusting him with the position of prime minister in Egypt. Without the training, the chances of Joseph being like pharaoh would be high.

God also spent a number of years training David before allowing him to be King in Israel.

Therefore, embrace God’s law and limits in your life. They are for your good.

If you want to grow fast, be quick in submitting to God’s law.