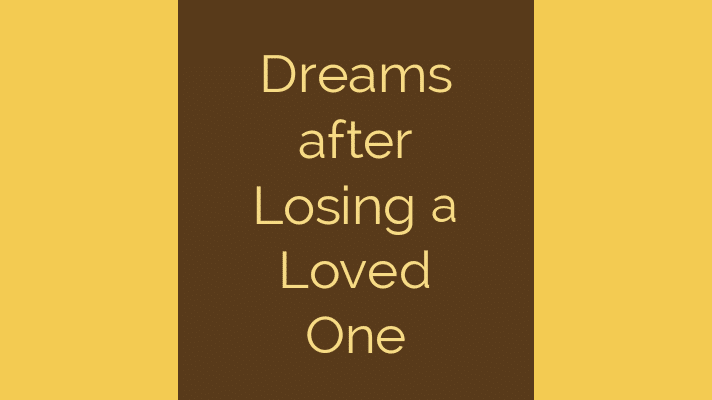 Dreams after losing a loved one are common. Two days after my mother died, I had a nightmare. I’m not sure whether to call it a nightmare because I had the dream while taking a nap during the day.

The surprising fact about the dream was that I had the dream before I learned about my mother’s death.

In the dream, I was in a bus travelling. Two women were crossing the road in front of our bus. One of the women managed to cross the road before the bus I was in reached her.

The other woman was not lucky. We hit her and I felt the bus shake a bit as it ran over her body then I woke up.

My heart was racing and I was sweating. What I didn’t know was that this was one in a series of dreams that I would experience after the death of my mother.

In this article, I want to look back at some of the strange dreams I had after losing a loved one. If you lost a loved one and you are experiencing grief dreams, I hope this article will help you know that you are not alone.

Read Also: How to Celebrate the First Christmas after Mom Died

I may not tell you what the dreams I had after my mom’s death mean but I will do my best to help you know what to do about them.

Dreams after Losing a Loved One

I had a series of dreams after losing a loved one. Though they took different forms, majority of them followed a specific pattern.

I can’t recall even a single dream where my mom spoke to me. In all the dreams, she was always silent. I never had any kind of conversation with her.

I only remember in one of the dreams I was carrying a basket that had goods for her while walking on a path. Still in that dream, she never uttered a single word to me.

I can’t confidently say why my mom was always silent in the dreams I had about her after her death. Maybe she was silent because she was dead.

In several of the grief dreams I had about my late mother, she would resurrect and then die again towards the end of the dream.

Most of the time she would appear very exhausted. She was in a pitiful state. She looked like someone who had been confined in a room for a long time.

Her face was gloomy. Her body was thin and she looked like she was about to collapse.

I remember in one of the dreams I wanted to go get her food because she looked very hungry and weak. But then she died towards the end of that dream.

In most of the grief dreams I had about my late mother, she would resurrect and find that many things had changed. She would struggle to cope with the changes but then she would die at the end of the dream.

Read Also: 3 Things you Miss when your Mom Dies

The saddest experience in the dreams I had about my late mother was when she would resurrect and find my Dad with my step mom.

I remember in one of the dreams she was contending for attention from my Dad but my Dad was paying attention to my step mom.

Both my late Mom and my step mom had cooked food for my Dad and he was to decide which food to eat. Then the dream ended.

I always woke up feeling sorry for my late mom. It felt as if she was having a rough time in the realm of the dead.

How Long Dreams after Losing a Loved One Lasted

A few years passed but I still had the grief dreams about my late mother.

The dreams about my late mother still occurred as late as six years after her death. I never thought they could persist for that long but they did.

I have not done any research to find out how long grief dreams are expected to last. Maybe they will last for a lifetime; who knows?

Meaning behind the Dreams

As I said before, dreams are mysteries. This includes dreams after losing a loved one. It is hard to fully understand them. Most of the time, I could only speculate what they meant.

I have never been sure what they meant or why I was getting them. But in the midst of the unknown, there were a few things I believed.

I have always known that there is no connection between the living and the dead. I therefore didn’t put any effort in trying to understand what my late mother wanted me to do.

I knew my mom was dead and her business on earth was done. Though I loved her when she was living, after her death, I decided that my life was better spent serving humanity than struggling to figure out what some dead soul wants me to do.

With that attitude, I brushed off all the dreams I had about my late mother. I would wake up having some emotions for her but then I would go on with my day and forget about the dream.

Let’s get a bit spiritual here…

I believe that demons can take forms of loved ones who have died and come to deceive us. Demons are deceptive spirits who use any opportunity available to lead us astray.

I do believe demons were using my mother’s face to try and win my sympathy. They wanted me to give them attention then they would start giving me instructions of what they wanted me to do.

Through the instructions they would lead me to do wicked things that displease God. I believe that is the reason why my late mother was not speaking to me in the dreams but only appearing weak.

Eventually, the demons might have given up hope in winning my attention and left.

What to do about Dreams after Losing a Loved one

I would advise anyone having dreams after losing a loved one to ignore them. Don’t reduce yourself to a puppet being controlled by some dead soul.

The truth of the matter is that once your loved one is dead you cannot have any communication with them. Don’t permit deceptive spirits to take you as a captive.

Some may say grief dreams come to help us heal. Well, I have no dispute against that but I still stand with the decision of not letting dreams about your dead loved one affect you.

If dreams after losing a loved one come, let them pass like the wind. Pay no attention to them. Don’t bother about interpreting them.

There are important things to do in life than to dwell on dreams of a dead loved one.