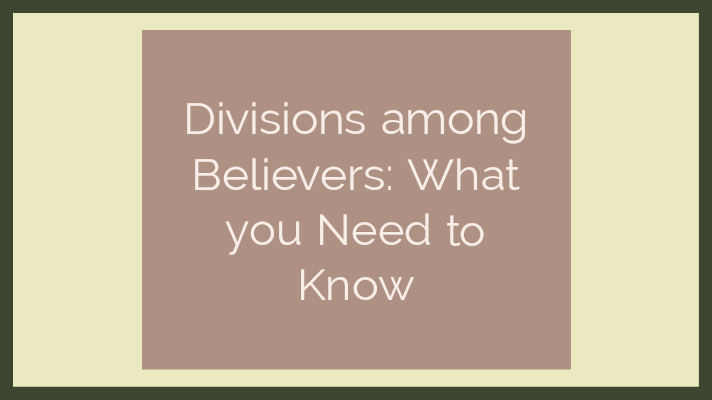 This article contains information that the Spirit of God revealed to me. I know He revealed it that many may be set free. I urge you to read it with an open heart. Do not harden your heart.

12 For we wrestle not against flesh and blood, but against principalities, against powers, against the rulers of the darkness of this world, against spiritual wickedness in high places.

Paul wrote this verse making it clear the enemies we wrestle against. It is clear from scripture that the devil is a deceiver (Revelations 12:9). His deception skills are highly advanced and many believers are victims.

Read Also: Why did God put the Tree of Knowledge in the Garden of Eden?

The Spirit of God revealed to me that many of the philosophies that most people associate with today are actually an agenda of the devil.

The devil invented these groupings with the idea of causing hatred among believers. It is not strange to see believers differ on the lines of these philosophies.

Another believer doesn’t participate in evangelism missions because he is an introvert. He excuses himself by saying he is socially anxious.

Others who identify themselves as straight may seem to be advocating for something good but actually they are being set up to fight those who support LGBT.

Whatever grouping you are part of, denounce it. Come out of carnal groups.

God, in the beginning, only grouped human beings as male and female.

2 He created them male and female and blessed them. And he named them “Mankind” when they were created.

After the fall, God came and further divided humans into tribes.

7 Come, let us go down and confuse their language so they will not understand each other.” 8 So the Lord scattered them from there over all the earth, and they stopped building the city.

The lord divided men into different languages so that they would not unite in doing evil and force Him to destroy them all. By having men in small groupings, God could save some.

Read Also: Why Fornication is a Sin in the Eyes of God

From that time, God began His salvation plans through tribal lines. It is clearly written in scripture that salvation is of the Jews (John 4:22). We are also told the Jesus is the lion of THE TRIBE of Judah (Revelation 5:5).

To save people from other tribes that are not Jewish, the lord created a pathway for us to become Jews by believing in Jesus who was a Jew.

That was the sole purpose of having men divided into tribes. But once Jesus brought salvation, we were called out of all the former groupings the Lord had made into the body of Christ.

9 And they sang a new song, saying, “You are worthy to take the scroll and to open its seals, because you were slain, and with your blood you purchased for God persons from every tribe and language and people and nation.

In the body of Christ, there are no groupings. We are just one!

28 There is neither Jew nor Gentile, neither slave nor free, nor is there male and female, for you are all one in Christ Jesus.

Paul rebuked Corinthians for trying to group themselves in the body of Christ. He insisted that in Christ there is no grouping.

3 You are still worldly. For since there is jealousy and quarreling among you, are you not worldly? Are you not acting like mere humans? 4 For when one says, “I follow Paul,” and another, “I follow Apollos,” are you not mere human beings?

22 whether Paul or Apollos or Cephas or the world or life or death or the present or the future—all are yours, 23 and you are of Christ, and Christ is of God.

Any grouping among believers is an agenda of the devil to divide believers. When you say you are a protestant, it automatically sets you up against a Methodist. Why go that direction?

We have fellowships and our fellowships have different names but our faith has to be one. Are we not all saved by the same sacrifice of Jesus? How then can we believe different things?

Other deceptive philosophies are mindsets.

Other beliefs such as believing men cannot be faithful in marriage are taught by the devil with the intention of making men unfaithful.

Read Also: Why Jesus called Himself the Son of Man

What happens is that we end up believing faithfulness is non-existent in marriage. People then give in to adultery because ‘everyone’ is doing it anyway.

The Spirit of God is crying out to believers to rise against these deceptive philosophies and ideas planted by the devil. There is no black or white man in Jesus. We are all a new creation in Him (2nd Corinthians 5:17).

My brothers and sisters, believers in our glorious Lord Jesus Christ must not show favoritism. 2 Suppose a man comes into your meeting wearing a gold ring and fine clothes, and a poor man in filthy old clothes also comes in. 3 If you show special attention to the man wearing fine clothes and say, “Here’s a good seat for you,” but say to the poor man, “You stand there” or “Sit on the floor by my feet,” 4 have you not discriminated among yourselves and become judges with evil thoughts?

Dear believers, we are one in Christ. There are no groupings of any kind. Let us be faithful to the command that Christ gave us to love one another.

May the Lord help us!