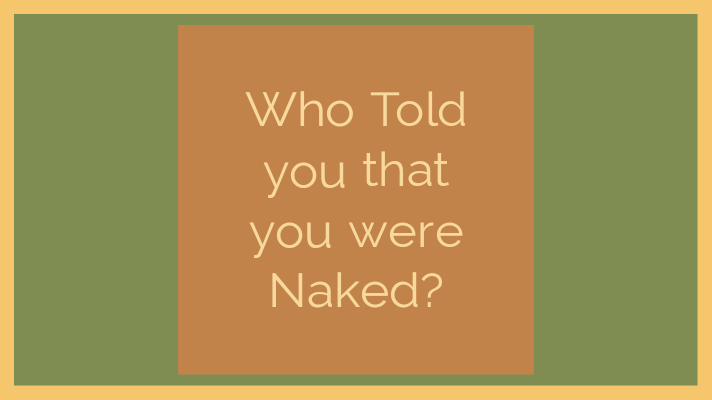 When Adam and Eve ate the forbidden fruit, God came to them with an interesting question; who told you that you were naked?

God was concerned about where they got that information from. He then asks them if they had eaten from the tree of the knowledge of good and evil.

From there it is a downward spiral with a number of curses and ultimately being banished from the garden.

The interesting part is the question that God asked Adam and Eve. For us believers, we find ourselves in situations that prompt God to ask us who took us to those situations.

When King Saul was facing Philistines at Gilgal, he was to wait for Samuel to come and offer a burnt offering in order to receive favor from God.

Read Also: How Salvation through the Name of Jesus Works

King Saul waited for seven days and when he didn’t see Samuel and the Philistines were approaching, he decided to offer the burnt offering himself.

Immediately he was done, Samuel came. Samuel asked him a similar question to the one God asked Adam and Eve in the garden; what have you done?

Many are the times we as believers stray into things we know so well we are not allowed to engage in. Immediately after we defile ourselves, God shows up. God showed up after Cain had killed Abel with a question; where is your brother Abel?

We find ourselves in a tight spot that tempts us to give excuses. Adam immediately blamed Eve for giving him the fruit. Didn’t God warn Adam about eating the forbidden fruit?

The same happens to King Saul. He immediately excuses himself using the situation that was at hand.

Eventually, in both the case of Adam and King Saul, consequences of their trespass followed. Adam was introduced to hard labor and banished from the garden while King Saul was told his kingdom won’t endure.

What should we learn from these two cases?

Some believers live compromising lives. Anytime they are tempted, they give in to the temptation and blame God for allowing the temptation to come their way.

God in His word has clearly stated that He won’t allow anyone to be tempted beyond what he can bear. In the Lord’s Prayer, Jesus includes a phrase that asks God to lead us not into temptation.

If a believer won’t pray, temptations will come. And if he doesn’t have the fear of God, he will end up like Adam and King Saul.

In many cases, believers despise the gravity of the consequences that result from their compromise. Did Adam really understand what death meant? Did King Saul know that offering the burnt offering would make him lose the kingdom of Israel?

Whenever you are tempted to do something evil, remember that the consequences are greater than you can imagine. A single lie that you tell will not only grieve God but it will also destroy your confidence in prayer.

Read Also: How to Never Fall Sick again as a Believer of Jesus

Have you not heard some believers say they can’t repent because their sins are too many? Others lose their confidence completely after sinning that they can’t even approach God.

God is gracious and merciful and will forgive sins if a person repents. But the devil uses the guilt that results from the compromise to destroy the person.

When the devil came to tempt Jesus, his aim was to get Jesus to compromise His core principles; worshipping God, walking in the Spirit and having faith in God.

It is only madmen who can walk naked. Likewise, in the spirit, it is only people who are spiritually mad that can walk naked. When you compromise the standards of God, your cover is taken away from you.

Adam became literally naked and had to take leaves to cover himself. King Saul became naked by losing his kingly respect.

A believer that lives a compromised life is naked. Such a believer will be afraid of praying since he doubts if God will accept him when he is naked. The nakedness will force him to hide like Adam and Eve.

A naked believer will also struggle with sin since there is nothing to cover him. Just as walking naked in the physical has many consequences, the same is true in the spirit.

Remember Jesus saying that whoever is ashamed of Him here on earth Jesus will be ashamed of him before the father? Jesus will definitely be ashamed for presenting a naked believer to His Father.

Imagine a man who is taking his girlfriend to his parents for introduction and the girl shows up naked or in a mini dress. The man will be ashamed.

Therefore as a believer, strive to be fully dressed in a gown. Live a pure life. We are the bride of Christ and as you know, brides show up in pure white gowns with their bodies fully covered including a veil in their face.

Read Also: Why it is Unwise for Believers to Tell Jokes

Take into account the three core principles that men get tempted in; our faith in God, walking in the Spirit and worshipping God alone.

Eve compromised her faith in God when the devil deceived her. She believed the lies of the devil and ate the forbidden fruit.

King Solomon gave up walking in the Spirit as his father King David had walked. After his death, the kingdom of Israel was torn apart.

Judas Iscariot worshipped money which led him to betray Jesus.

These three areas are where all temptations spring from. To overcome temptations related to your faith in God, you have to live by the word of God. Jesus quoted Moses saying ‘Man shall not live by bread alone but by every word that proceeds from the mouth of God.’

For temptations related to walking in the Spirit, we overcome them by suppressing the desires of the flesh. It involves spending some days in fasting and staying in an environment that promotes godly activities.

The temptation to worship other idols is overcome by denying ourselves. When we die in Christ, we no longer seek after the perishable idols of this world but we wait for the eternal kingdom of God that is to be revealed.

Our God is loving and caring. When he found Adam and Eve naked, he made skins for them to cover their nakedness. When we were naked, Jesus covered us.

Let us not go back to the former nakedness that we were taken from but strive to live a pure life clothed with Christ.

To God our Father be all glory and honor!