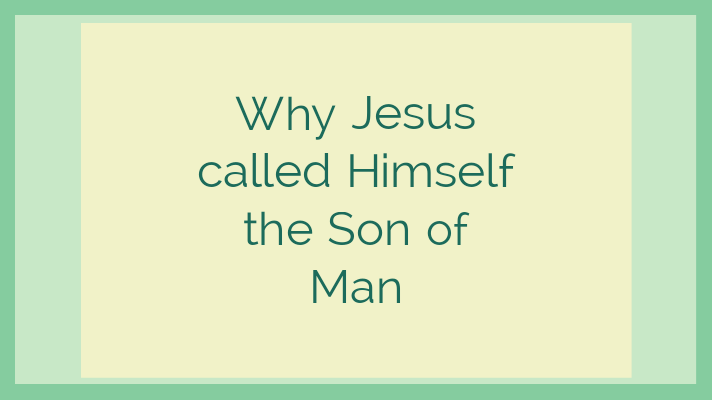 Jesus referred to Himself as the son of man many times in the gospels. To a keen believer, that is fascinating since Jesus is the son of God.

But there is a good reason why Jesus referred to Himself as the son of man. This article explains the revelation behind Jesus calling Himself the son of man.

Jesus came from heaven. He said it Himself (John 6:38). To understand why He called Himself the son of man, let’s analyze the word son.

A son is a male child of his parents. One outstanding benefit of being a son is the entitlement to inheritance from the father. Jesus said all that the Father has belongs to Him (John 16:15).

Therefore, by Jesus calling Himself the son of man, it meant that He would inherit all that belonged to man.

Read Also: How to come out of Poverty as a Christian for Good

From that, we understand that Jesus inherited all the flaws of man. It clearly shows that He became fully a man. Aren’t sons of men also men?

After inheriting all the flaws of men by virtue of being ‘son of man’, He paid for them on the cross. The Bible tells us that Jesus takes away the sin of the world (John 1:29). How? By being the ‘son of man.’

The interesting part is that after His resurrection, He stopped calling Himself the son of man.

That means that after His death on the cross, He had accomplished His role as the son of man. He inherited all that God has. This explains why He was exalted above all creation and given the seat at the right hand of God (Philippians 2:9).

Another interesting discovery is that the followers of Jesus are also referred to as the sons of God after Jesus resurrected. In fact, the very first person to meet Jesus after He resurrected is told that God is her Father.

17 Jesus said, “Do not hold on to me, for I have not yet ascended to the Father. Go instead to my brothers and tell them, ‘I am ascending to my Father and your Father, to my God and your God.’”

That means that the followers of Christ are one with Him and also get to inherit all that God has by virtue of being His sons.

Therefore, as a believer you are no longer a son of man even though you are the seed of a man. It is only your flesh that remains as the son of man since it is in the image of your earthly father.

Read Also: Teach us to Number our Days: The Revelation Behind it

In Christ, you have become a son of God and have inherited all that God has. It is the reason why Paul asks us in Galatians to walk in the Spirit (Galatians 5:16).

The main reason Jesus called Himself the son of man was to gain the right to inherit the sins of men. After paying for them, He went back to being the son of God to inherit what God had promised to Him.

In addition, He made us sons of God too so that we can share in His inheritance. The only reason why we are still on earth is because we are not yet fully mature to inherit what God has prepared for us (Galatians 4:1-2).

All these teachings and rebukes are shaping us to inherit the eternal Kingdom of God.

To God be all the glory for His unfailing love!