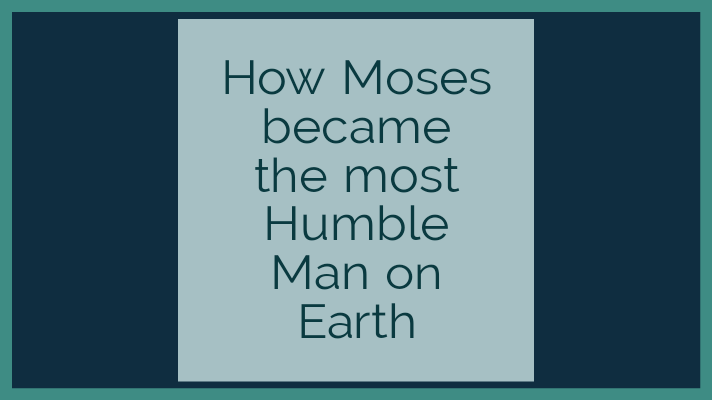 I read a verse in Numbers 12:3 that claimed Moses was the most humble man on the face of the earth during his days. I knew that was true because the word of God is true but then, I couldn’t figure out where that humility of Moses was portrayed.

I have read the story of Moses since childhood but I couldn’t see anything he did that would crown him the most humble person on earth. In fact, I didn’t expect humility to be used to describe Moses after all his fists of rage while in the desert.

But then I got a revelation that opened me up to the humility of Moses. After getting the revelation, I had no doubt that indeed Moses was very humble.

So, what is the mystery?

Humility in simple terms is giving up what you rightfully deserve for another purpose that benefits another person. The best example is that of Jesus giving up His glory in heaven to come and serve men.

In His own words ‘There is no greater love than for a friend to lay down his life for his friends.’ We see that humility is about giving up your own will in favor of another person’s will.

With this understanding, we can immediately see where the humility of Moses came from…

First, Moses chose not to enjoy the princely treatment that was in the palace of Pharaoh. Instead, he chose to suffer with fellow Israelites.

Secondly, Moses gave up his will in favor of God’s will when God approached him at the burning bush.

At first, Moses didn’t want to go back to Egypt. That was the will of Moses. But then just like Jesus who said ‘Nevertheless, not my will but yours be done’, Moses gave up his will in favor of God’s will and went to Egypt.

Thirdly and by far the most important show of humility, Moses suffered in the wilderness with rebellious Israelites though he was obedient to God. That is exactly the same thing that Jesus went through; He suffered for wrongs he had not committed.

That was the crowning moment for Moses. With those three instances where he portrayed the image of Christ’s suffering, Moses was considered the most humble man on earth.

In Philippians 2, we are told of the humility of Jesus who didn’t choose equality with God but rather lowered himself to the level of men. Not only did He lower himself to be like men but He suffered for the wrongs he didn’t commit in the hands of sinful men.

Read Also: The Purpose of the Law of God in our Lives (Why we need it)

We are then told that because of His humility, God exalted Him and gave Him a name that is above all.

To this day, the name of Moses is mentioned alongside that of Jesus and they are even comparable because of humility.

As a believer, humility is about giving up your own will in favor of God’s will. Many people are chasing after their own desires. But a man is considered humble when he chooses to pursue what pleases God over what pleases him.

Therefore, put God’s will above your own in as many areas of your life as possible. That is what true humility is.