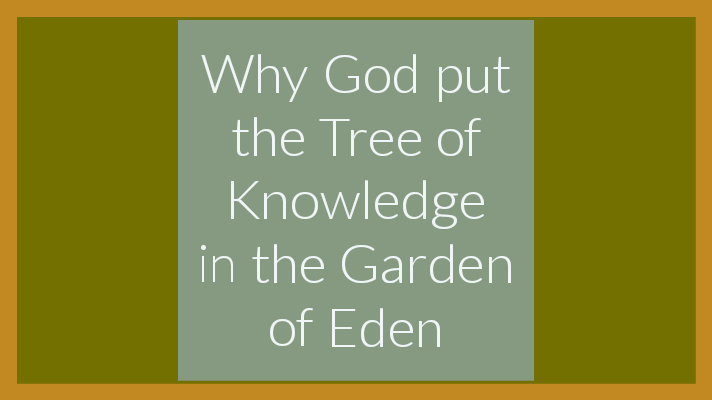 Did God put the tree of the knowledge of good and evil in the garden so that man could exercise his free will? Yes, though that is only half of the story.

There is a more concrete reason why the tree of the knowledge of good and evil had to be in the garden. As a believer, I have struggled with this question for the longest time I can remember.

It is only recently that God revealed to me a better understanding of why the tree of knowledge of good and evil was in the Garden of Eden.

By the time God decided to make man, many events had taken place in heaven. Satan had already rebelled and had been cast out of heaven.

The story begun when Satan wanted to be like God. Satan didn’t want to overthrow God as some believers assume, he just wanted to be equal with God.

Read Also: How We will Live in Heaven without Disagreements

When God created Satan, He gave him His likeness but not His image. The same is true for the angels of God; they are like God in terms of character but they don’t have His image.

What Lucifer wanted was to have the image of God too. In other words, he wanted to be a second God. When he was cast out of heaven, God decided to make man and give him what the devil had sought after; God’s image.

We know that we are made in the image and likeness of God. We are three in one just as God is three in one. The Bible says Jesus is the image of the invisible God meaning that the human structure is exactly how God is.

When Adam was created and given what the devil coveted, the devil sought to steal it from him. That is what made the devil deceive Eve.

About the tree of knowledge, this is the story…

The Bible says righteousness and justice are the foundation of God’s throne (Psalms 97:2). That means that everything that God does, provided He is on His throne, is right and just.

When God made Adam, He knew that the devil would come to steal, kill and destroy what He had given to Adam. That is why He created a backup plan even before creation.

The intention of God was to keep the information of the things that had happened in the heavens from Adam lest Adam also hear of them and be tempted to exalt himself above God.

But then God could not completely hide the information from Adam since that information already existed. It would also be unjust.

God, in an attempt to prevent Adam from knowing good and evil while still being just, decided to put the knowledge of good and evil in a fruit and warn Adam against eating it.

A woman who has given birth to a child who ended up being a murderer will still get pregnant to give birth to another child even though she knows there is the danger of that child becoming a murderer too.

However, unlike for the first child, she puts in place a backup system just in case the second child becomes a murderer like the first one.

But no matter what she does, she is sure the second child will one day know about the possibility of being a murderer.

She then goes ahead to hide all weapons used by the murderous brother in the innermost room of the house and warns the younger child to never step in that room.

But then the older brother incites the younger brother to check out what is in that innermost room. The younger brother sees the murder weapons and eventually becomes a murderer too, which forces the mother to use the backup plan she prepared to restore him.

Reality of the Knowledge of Good and Evil

In our world today, we know good and evil. Every day we are tempted to do evil. Many are pursuing to be like God just as the devil did.

Have you not seen how men are distorting everything God made in an attempt to create their own? But God has called us to rely on the redemption that Jesus brought us through His death and resurrection.

Read Also: Financial Fasting for Believers: What you need to Know

As a believer, do your best to avoid knowledge that is not meant for you. Any knowledge of evil you get is an extra room for the devil to tempt you.

God’s intention is for us to know only what is good. He is a loving Father. Yield yourself to the leading of the Holy Spirit that He may lead you into all the truth.