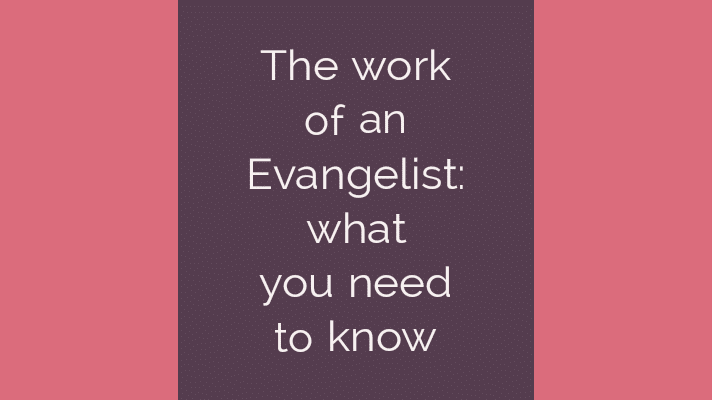 The work of an evangelist is crucial in the body of Christ. Though every believer can evangelize, there are those who are called to be evangelists.

The evangelism that ordinary believers do is to fulfill the command that Jesus gave us; to preach the gospel to all creatures baptizing them in the name of the Father, the Son and the Holy Spirit.

Evangelists on the other hand are crafted from birth to carry out a specific assignment related to God’s kingdom.

Whether you are called to be an evangelist or you are a believer who considers doing evangelism, there are three things you need to know about the work of an evangelist.

The Work of an Evangelist

Evangelists are gifted in leading people to Christ. While any believer can lead someone to Christ, evangelists have an easier time doing it than average believers.

For an evangelist, God takes them through a training that makes them good at winning souls. The main work of an evangelist is to lead people to Christ.

Each evangelist has his own specific way of leading people to Christ but all of them lead people to Christ. Some evangelists do their work through street preaching, others reach out on social media and others hold crusades.

God in His own wisdom molds each evangelist based on the assignment He has for him.

The work of leading people to Christ is critical in the plan of God. It is easy for someone to get in the way of people going to Jesus.

Many of the evangelists that fail at their work become stumbling blocks for people who want to get to Jesus.

Jesus accused the Pharisees of this evil. They were burdening people with the law yet they could not keep it themselves. As a result, God stripped the work of evangelism from them and gave it to new converts who believed in Jesus.

Since then, evangelists have been a pillar in the spreading of the good news of Jesus Christ. Many people have been led to Christ by evangelists.

2. Declare the Oracles of God

While leading people to Christ is the main assignment of evangelists, a great part of their work involves declaring the good work of the Lord.

The salvation of men is based on the death and resurrection of Jesus. Among many other things that evangelists are called to do, they are required to declare the work that Jesus did on the cross.

This message must be clear to all people. When a person appears before the judgment throne of God, there should be no excuse.

The work of making sure all people get to hear of the great salvation that has appeared to all men is given to evangelists.

Some evangelists do this as their main assignment. They barely ask people to come to Christ but they declare that Jesus is the way the truth and the life.

John the Baptist, though he was a prophet because he came before Christ, shows a good example of declaring the work of God.

John the Baptist, when he saw Jesus coming towards him, declared ‘Behold the lamb of God who takes away the sin of the world’.

That declaration was to prepare the hearts of people to believe in Jesus. John the Baptist had a good reputation among the people.

People knew that he was sent by God. His endorsement of Jesus was an important act in helping people warm up to Jesus.

Evangelists who declare the work of God play an important role in helping people open up to what God is doing.

The work of warning against evil was for the prophets until when Jesus came. In the Old Testament, we read of countless instances where God sent prophets to warn His people against worshipping other gods.

John the Baptist finalized the role of prophets warning God’s people against doing evil. We see John warning tax collectors not to collect more tax than what is stipulated.

Some evangelists are specialized in warning people against the punishment that awaits people who deny Jesus. These evangelists often have a good grasp of heaven and hell.

To them, they see people in terms of where they will spend their eternal life. No matter who you are, they will ask you where you are planning to spend your eternity.

Their approach seems hard and they can be uncomfortable to deal with but that is what God designed them to do.

Their black and white approach is the mark of an evangelist. Apostle Paul once mentioned this type of evangelists when he said that some people can only be saved from destruction by warning them of the coming punishment.

Such evangelists are often the last resort. God sends them to people who have hardened their hearts for a long time.

Their work is not necessarily to win people to Christ but rather to make sure that the people have no excuse when they face judgment.

When sin increases, these are the people God sends to rebuke and warn those who are practicing evil.

Evangelists are the messengers that God sends to carry out His will. While they share some of their work with prophets and pastors, they are distinct in their approach.

They are straight to the point and waste no time. Their tough approach is what makes them ideal for the kind of work they do.

If God has called you to be an evangelist, don’t be afraid to be tough on people. Of course not many people enjoy the ministry of evangelists but as bitter as they may be, they are life savers.

The body of Christ must be disciplined. Evangelists are God-sent to make sure we receive eternal life through our savior Jesus Christ.