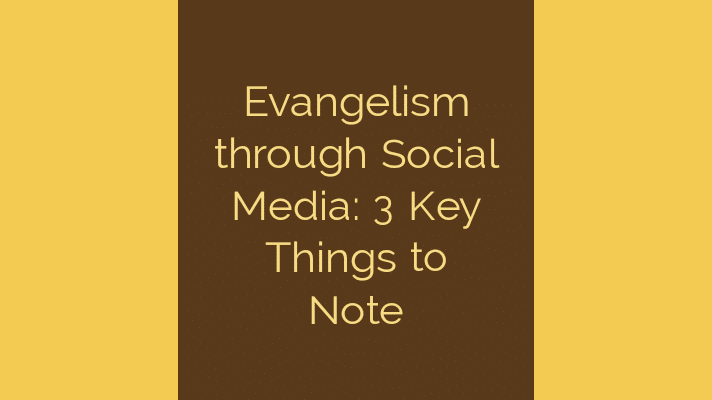 Evangelism can take any angle. Evangelism through social media can be greatly beneficial to the body of Christ when done right.

If you are considering using social media for evangelism, take note of the following key things.

Therefore, if you want to make your evangelism on social media successful, target the masses. Since many social media users are unbelievers and lukewarm believers, teach basics.

As mature believers, we have the tendency to show off how much we know. In our minds we may think we are preaching an average message but to our listeners, it is too difficult to understand.

While to you seeing visions may be a norm, there are people who still doubt if Jesus is God. Topics like forgiveness of sins and salvation through Jesus are not common to many.

While some know that if they repent God will forgive them, most have a flawed understanding of how forgiveness works.

There are all manner of false teachings that people are exposed to. Therefore, when you are evangelizing on social media, make sure you cover the basics.

Unless you are reaching out to an audience that is mature in the faith, you should always stick to the basics.

The Example of Jesus

At the very center of salvation is Jesus. His life is a model that we are all expected to follow. Not only are we supposed to advocate for it but we are also expected to believe in Him as the only savior.

In your messages on social media, make sure you bring out this truth. The message should exalt Jesus and nothing else.

You can decide to post scriptures about the teachings of Jesus on their own. We know that the word of God is living and active and that it is sharper than any double edged sword, piercing to the division of the bone and marrow, soul and spirit. It is also the best discerner of the hearts of men.

Basic teachings are the best when you are doing social media evangelism.

The attention of people is divided among many things. This is why your message should be short and clear.

In the Bible, we are told that John the Baptist preached saying ‘Repent for the kingdom of God is at hand’. That is a good example of a message that is short and clear.

Many people have an idea of salvation. Repentance is not a mystery to many. By posting such a simple phrase on social media, many are prompted to reflect on their state.

The goal is not necessarily to inform them but rather to prompt them to think about their salvation.

If you have followers who desire to learn deep things about salvation, you can incorporate long messages.

Images are the epitome of passing short messages. It is said that a picture is worth a thousand words. Instead of struggling to compress your message so that it is as short as possible, post an image that passes the same message.

There are many apps that you can use to create images. Put scriptures on those images and post them on social media.

Though you may not get much feedback, there are people whose lives will be transformed by the verses you post. God sees in secret and He rewards in the open.

While evangelizing on social media may be easier than other forms of evangelism, it is easy to overlook it. You may post Bible verses for a few days then wait for months before posting other verses.

Such inconsistent posting will make your evangelism on social media unfruitful. Social media is a noisy market place where messages get drowned in the noise almost immediately they are posted.

Assume that every post you publish is one person you are reaching out to. Then ask yourself how many people you want to reach.

The gospel that we know today reached us because those who were entrusted with it remained faithful. They were consistent in passing it to others all through their lives.

Evangelizing on social media should be your lifestyle. The same way people take a shower on a daily basis, the gospel needs to be posted on social media.

It doesn’t matter if only one person sees your message; the most important thing is that you participate in spreading the word of God.

Remember to preach basic messages that are easy to understand. Keep your messages short and clear and be consistent. It is this combination that will make your evangelism on social media fruitful.