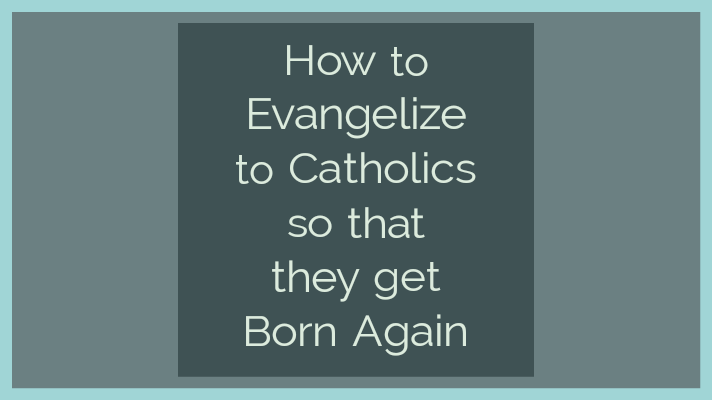 Evangelizing to Catholics proves to be tough for most evangelists. Reaching out to a Catholic with the gospel of Christ can easily get out of hand unless you know exactly what you need to do.

Catholics are not unbelievers. They are believers who have extra beliefs that do not align with the truth. Approaching them as unbelievers is a bad idea.

Failing to point out their wrong beliefs is also a bad idea. The goal of reaching out to anyone is to help the person know the truth of the gospel and leave ungodly beliefs.

Dealing with a Catholic is not any different.

I was raised in Catholic Church. I understand most of their operations. Reaching out to Catholics used to be hard for me but over time, I improved.

Nowadays, I joy over evangelizing to Catholics. I get an opportunity to share with them the truth that the Lord revealed to me.

In this article, I want to share with you the knowledge you need to evangelize to a catholic.

Main Argument Point when Evangelizing to a Catholic

Time and again, I used to get into arguments with Catholics. Every time I would evangelize to them, I would end up in almost the same argument.

The argument was about Catholic being the worldwide church and therefore the true church. My defense was in the line of other churches are serving God as well.

I would try to push the Catholics to have less resentment for other churches. Sometimes I would mention how we are one body of Christ but the Catholics would not take it.

Any time you go to evangelize to a Catholic, the argument of which church is the true church is likely to come up. Once that argument starts, getting the Catholic to change their beliefs becomes very difficult.

Catholic Church has transformed many lives. We can’t quantify exactly how much impact Catholic has had in Christianity but certainly it is not small.

Because Catholic has been around for ages, those who are devoted to it are sure it is the only true church. Most of them assume other churches are anti-catholic.

While some of the issue the priest was pointing out about the protestant churches were true, it was unwise of him to conclude that those churches are bad.

As far as I know, Jesus also pointed out faults when He sent a message to the seven churches of Asia in the book of Revelations. When Jesus was pointing out the faults, He was doing it with the intention of encouraging the churches to amend their ways.

For example, when Jesus was speaking to the Church in Laodicea, He pointed out that they are neither hot nor cold and that He would spew them out of His mouth. But then in concluding His message, Jesus told them that He was standing at the door knocking and anyone who would open, He would come in and dine with him.

That is the correct way of pointing out faults.

I am writing all these so that you may understand the main argument point of Catholics.

Just as Catholics point out faults in other churches, they too have a fair share of faults. If we choose to engage in fault finding, it is Christ who suffers.

Churches have always had faults. Nothing is new. As a good evangelist, have this at the back of your mind.

The Common Mistake Evangelists make when Evangelizing to a Catholic

I see most evangelists trying to get Catholics out of Catholic Church. This is a mistake.

Not all Catholic beliefs are wrong. As we have discussed above, Catholic Church has transformed the lives of many people.

Why would anyone want to leave a Church that has transformed the lives of people? And if you argue that Catholic has destroyed the faith of many, other churches have done it too.

For this reason, evangelizing to a Catholic with the aim of getting them out of Catholic is unwise.

Anytime you start a conversation during evangelism and the person says ‘I am a Catholic’, don’t fall into the trap of pointing out the wrong beliefs of Catholic Church.

If you start pointing out the wrong beliefs of Catholic Church, the Catholic devotee equally has faults to point out against your church.

I see many evangelists fall into this trap. Don’t be one of them.

When Someone Says ‘I am a Catholic’

When you are evangelizing to someone and he says ‘I am a Catholic’, it is a trap that you need to handle carefully.

Whenever someone says he is a Catholic, respond with a question; are you a disciple of Jesus?

In most cases, the person will say yes. From there, ask questions about the person being a disciple of Jesus.

I have never seen Catholics go out to evangelize yet Jesus asked us to go into the world and preach the good news to all nations baptizing them in the name of the Father, the Son and the Holy Spirit.

With this knowledge, once a Catholic says he is a disciple of Christ, I ask if he does what Jesus commanded His disciples to do.

Before long, the Catholic will find himself conflicted between obeying Catholic teachings and what Jesus requires His disciples to do.

Pointing out ways in which Catholic Church limits the Catholic devotee from being an effective disciple of Jesus does wonders.

A Catholic who loves God should not have a problem forsaking some of the Catholic teachings if they are a hindrance of him being an effective disciple of Jesus.

In the end, the Catholic may still go to Catholic Church but his life will be dedicated to Christ rather than Catholic.

Tips to Evangelize to a Catholic

Acknowledge their Love for God

When you are evangelizing to Catholics, remember that they love God. Some of them may have more love for Catholic Church than Jesus but treating them as if they have no love for God is a bad idea.

You can acknowledge their love for God by appreciating them for their commitment to going to Church. Going to church is the modern day fellowship that Jesus instructed His disciples to continue in.

By them committing themselves to church, they have love for God.

Most Catholics too are hospitable. Their deeds are good. Jesus instructed us to let our good deeds shine before men so that our Father in heaven may be glorified.

By those Catholics upholding good deeds, they deserve to be acknowledged. Instead of seeing the Catholic you are evangelizing to as a bad person, notice the many good things he carries.

Remember the Catholic, just like you, is a child of God. They struggle with struggles that all believers in Christ face. Be kind to them.

Trying to win the battle of which church denomination is right against a Catholic is a waste of time. Avoid it if you care about transforming the lives of people through your evangelism.

As I mentioned above, when the Catholic devotee you are evangelizing to brings up the topic of denominations, wisely turn them away from it.

Let your conversation be focused on the person being a disciple of Christ rather than a member of Catholic Church.

You may find some Catholics who won’t let you speak to them without speaking about Church denominations. In such cases, it is wise to walk away. The Bible warns us against engaging in arguments.

The Catholic you evangelize to may also ask which church you go to. This can be tricky to answer especially if you don’t want to bring up the topic of Church denominations.

If you sense that the Catholic is asking the question to trap you, tell him you are a disciple of Christ and that is what matters. If they insist to know the church you go to, tell them.

In the end, if a person refuses to listen to the gospel of salvation because the person who brought it comes from a different church, it is him who will perish.

Do your part and leave the rest to God.

Point out their Weaknesses Wisely

All people, including Catholics, have weaknesses. When you start speaking to them about Christ, you may notice some of their weaknesses in the faith.

Handle their weaknesses the same way you would like others to handle your weaknesses. You may find a Catholic who believes that she must walk with a rosary on her neck for protection.

Such a belief is definitely unbiblical. If you handle it wisely, the Catholic will be transformed.

I once evangelized to Catholics. At the end of the session, I offered to make a prayer. The Catholics did the sign of the cross before I started praying and after I was done praying.

I chose not to mention anything about the sign of the cross. It is always wise to overlook such wrong beliefs unless it is necessary to point them out.

Also remember that leaving a certain belief is not easy. Allow the Catholics time to leave some of their wrong beliefs.

How to Convince a Catholic to get Born Again

Catholics often refuse to make the confession of giving their lives to Christ. Some of them assume that the confession to give your life to Christ is a practice for the protestant churches only.

Instead of telling them to get born again, I explain to them that Jesus loves them. But for Jesus to work legally in their lives, they must open the door for Him by making a confession.

I normally ask them if they want Jesus to work without hindrances in their lives. They always say yes. Then I follow up by asking them to repeat the confession after me to get born again.

The other strategy is by asking them if you can pray for them. When they allow you to pray for them, pray for their needs as the Spirit of God leads you.

Once you are done with the prayer, ask them to repeat the confession after you. Don’t even mention that it is a confession to get born again.

If you prayed for their needs and they felt good, they will reciprocate by repeating the confession to give their lives to Christ.

Ending an Evangelism Session with a Catholic

I love ending my evangelism sessions with a personal request to the person. Most of the time I ask them to promise me that they will remain committed to Jesus.

I found out that if you make a promise to someone, you will more likely keep it even if you never meet the person you made the promise to again.

The shame of breaking a promise you made to someone stops you from breaking the promise.

When ending an evangelism session with a Catholic, ask them to promise you that they will love Jesus more than anything else including Catholic Church.

Let them walk away with a resolve to keep the teachings of Jesus. You can ask them to say a simple statement like ‘I am a disciple of Jesus and I will not be ashamed of Him’.

I hope this article has given you direction on how to evangelize to a Catholic. Winning Catholics to Christ is not difficult. With practice, you will master it.

May God help you!