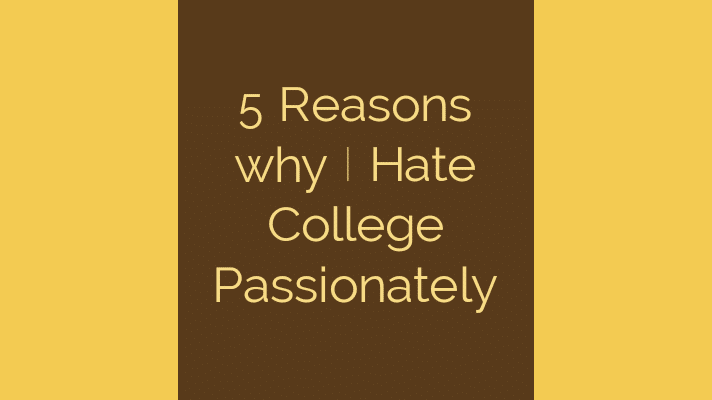 I have strong reasons why I hate college. I hated college right from the first day. The events of the admission day made me hate college with passion. I never expected the hatred I had for college to last but it did.

As the days went by, I hated college more. Eventually, the hatred got to the tipping point and I dropped out.

If you are interested in the details of how my hatred for college escalated until I dropped out, read them in my story of how I dropped out of college.

Surprisingly, I went back to college three years after I dropped out.

Had my hatred for college ceased?

I went back to college to have peace with my dad who was a professor.

In this article, I have summed up my frustration against college into three major arguments. The views I air here are my ‘biased’ view of college. I’m sorry in advance if you love college.

Why I hate College

1. College is too Expensive

We all know it. It needs no introduction. Student debt is a big deal in the current era. Many graduates are languishing in debt with no end in sight.

It is not only those who have failed to get employed that are deep in student debt but also those who are employed.

The following are the two main issues about college that I believe make it expensive for no good reason. I hate how college is expensive because of these two reasons:

I’m a big fan of reading books. I advocate for research and expanding one’s knowledge. But I don’t understand why some books in college cost so much.

I have read incredible books that transformed my life in no small way but they didn’t cost much. In fact, I got most of them free of charge.

On the other hand, books used in college cost an arm and a leg and in most cases, they rarely impact lives.

To me, textbooks used in college seem like a big scam that some people are using to hoard wealth for themselves.

Why should they be that expensive?

Let’s be honest, when it comes to dealing with houses, a lot of money is involved. Whether you are renting or buying, it always costs a lot.

But colleges have taken the accommodation fee to a whole new level. Instead of charging what would be a normal rental fee, they are charging as if students are being given a five star hotel treatment. That is why I hate college.

The hostels are nowhere close to spectacular. Students share rooms and most resources. Why the heck should they charge as if they are luxury hotels?

I hated the fact that I had to pay a lot of money for accommodation in college yet I was getting average services. Maybe it would have been cheaper to rent a room in a hotel for the while I was in college than waste it on mediocre accommodation facilities in the university.

The main agenda of going to college is to gain knowledge. Not just any type of knowledge but knowledge that should help make one’s life better.

Surprise! Surprise! College is giving out the same old regurgitated knowledge to every student since eternity.

That is after you have paid them the huge sums of money I have talked about above. In other words, college sinks you in debt and they are not kind enough to teach you how to recover from it.

When it comes to offering impractical knowledge, college thrives in three areas:

I once sat in a communication skills class and the lecturer said that every essay I was to write must have citations. When I went to the Library to get a book to cite from, all I could see were old books with faded covers. it became one of the reasons why I hate college.

Read Also: 3 Things I did after I Dropped out of College

How was I supposed to read such old books and get new knowledge? Come on!

Many books that I used to see in the University library were old and though I never read any of them, I doubt if they had anything new to offer.

A few of them might have been relevant especially if they were talking about evergreen subjects but majority of them were most likely just a pile of rubbish.

Why do Universities keep using old books even after many things have changed?

Who is going to read a dusty, faded book about world war two when I can easily get more accurate details on Wikipedia? Of course that is without having to struggle with dust.

What is the benefit of cramming a bunch of sentences just before a test, pasting them on paper for a lecturer and then walking out of the lecture room without ever remembering them?

Welcome to the classic college cramming culture! This is another reason why I hate college.

Knowledge is meant to be used to make lives better. It makes sense to gather knowledge that you need and after gathering it, putting it into practice.

I hated college because of this mentality. I tried to genuinely gather knowledge and apply it in my life but I failed terribly.

The mode of giving out knowledge is tailored to favor crammers and frustrate students who genuinely seek knowledge.

In college, the best student in class is one who is lucky to have crammed the topic that is asked in an exam.

You may know a lot about a subject but still score poorly just because what you know didn’t appear in the examination. I hate college for this.

Since I have never been a person who gathers unnecessary knowledge, I found it hard to cope with the fast pace of gathering information to paste it on exam papers.

And though I knew quite a lot of things in life, I failed terribly in college. I was so demoralized with my performance that I decided quitting college was better.

With the biased testing method used in college, it only means that some genuine bright people in life will end up being shamed as if they were fools.

The poor grading system used in college made me hate college passionately.

This is a subtle way through which college ruins lives. Majority of the students who attend college never notice how they are slowly baptized into being employees.

While being an employee is not anything to frown at, it is a problem for those who are not meant to be employees.

Time and again I have seen people who performed poorly in school or even dropped out but they ended up doing great stuff after leaving college.

A good number of such people detected the employee mindset being forced on them and they were wise enough to resist it.

There is no arguing with the fact that all the lecturers teaching in college are employees. And as far as I know, no one can teach you to do anything that he has not done himself.

If you are an employee, you can’t teach people to be business owners. An employee only knows about being an employee and can only teach someone to be an employee.

Though lecturers don’t wake up and maliciously teach students to be employees, they do it through their body language.

Right from how they behave, to their choice of words, to their level of aggression and many other factors, they teach the employee mindset.

When I wanted to become a blogger, I began listening to bloggers and copying what they were doing. I immersed myself in the blogging lifestyle and here I am.

With such repeated subtle communication, students end up with a very poor, broke, employee mindset that sets them up for mediocrity in life. This is another reason why I hate college.

Again, there is nothing wrong with being taught how to look for a job. Colleges teach students how to write job applications that get them jobs, which is great.

But if you have the entrepreneurial mindset, the job seeking mindset will destroy you. Most of the time, I see graduates talking of getting jobs then using the money they earn from their jobs to start a business.

It sounds like a good idea but it is a terrible idea.

If you want to do business, start with a business right away. More time spent doing business will mean more experience and thus greater success.

Let those who are interested in exchanging their time for money sit in college classes and learn how to write the perfect CVs.

The fact that job seeking is a subject that is often emphasized in college makes college a terrible place for students who have bigger ambitions than just getting employed.

Related Post: Parents won’t Pay for College? Here is the Best thing to do

Why I hate College Passionately

Those are my main reasons why I hate college and why I don’t regret dropping out even though I went back.

It makes more sense to me that individuals analyze their lives before deciding if enrolling in college is a good idea. In most cases, college makes the lives of young people worse than if they had not attended it.

A big number of students in college are not making any progress in life. They are merely drifting through the stages of life and worst of all, the college philosophy praises them for wasting their lives.