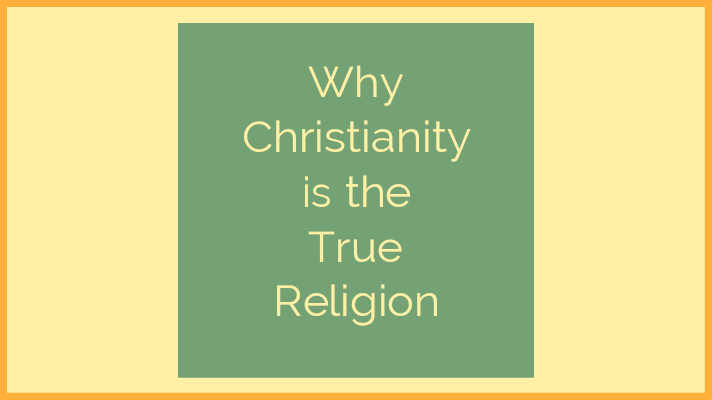 However, note that this reason is an infinite reason. That means that there are infinite questions that can be raised about it but still it will remain the reason.

But how true is that?

Well, that is why I said this reason is infinite. Every day, there is a new philosophy that challenges the Truth of Christianity. But time and again Christianity proves all philosophies wrong.

In other words, at the end of every religion, you will find Christianity.

There was a boy whose father worshipped wooden idols. This boy grew up knowing that those wooden idols were the most powerful beings in existence.

The boy worshipped them until one day when their house caught fire. The fire burnt everything including the wooden idols.

After seeing that the fire had burnt the idols the boy immediately believed that the fire was greater than those wooden idols. At that point, the boy began worshipping fire.

He revered fire because of its power to consume things until the day a bucket of water fell on fire that he had lit. The fire immediately went out.

This boy’s beliefs were again questioned. “If fire was the greatest, then why couldn’t it burn water?” He asked.

From that day onwards, he began worshiping water. But a few days later, he noticed that whenever water was poured out, it was swallowed up by the earth.

He wondered why the water would be easily swallowed up by the earth if indeed it was the greatest in existence.

Once again he switched his worship from water to the earth. He held the earth in reverence until one day he travelled with his father through a desert.

At that point he questioned the almightiness of the earth. He saw that the sun was more powerful than the earth. From that point onwards, he began worshipping the sun.

After worshipping the sun for a while, he realized that the sun was bound on a schedule. It could only shine for a maximum of 12 hours a day.

He wondered whose schedule the sun might be subject to. At that point, he stopped worshipping the sun and began seeking the one who put the sun on a schedule.

One day, while on his search, he was passing near a church and he heard a Preacher say ‘On the fourth day, God made the sun to rule over the day and the moon over the night.’

Immediately, he went in and asked the Pastor how he can find God. And that is how he became a Christian.

Whatever people worship, if you keep questioning it, you will reach a dead end. That dead end can be explained by the Bible and that is why the God of Israel, is the true God.

When Moses was sent to Egypt to bring out the Israelites, he found the Egyptians worshipping other gods. In a contest, when he threw down his rod and it turned into a snake, the Egyptian magicians also threw down their rods and they became snakes.

The only difference was that the snake of Moses swallowed the snakes of the magicians. That is how the God of Abraham, Isaac and Jacob is.

He doesn’t deny the existence of other gods but He proves to us time and again that He is above them all so that we may worship Him.

But one may argue, don’t other religions also believe in the same God? Well, every religion calls their mightiest being god but that does not mean their god is the same as the God of Israel.

The true God identifies Himself as the God of Abraham, Isaac and Jacob. He goes ahead to clarify that He sent His only Son whose name is Jesus through whom all men get their salvation.

Therefore, any religion that claims otherwise is not worshipping the God of Israel.

So, to this day, no other religion has been able to explain EVERYTHING except Christianity. Most Christians may not have all answers to all questions yet but the Bible has all the answers.

It is important to mention that it is ONLY through the Holy Spirit that one can be able to use the Bible to answer all questions. That is because, Jesus said He had much to tell us but the disciples couldn’t bear it at that time.

Then He promised that He would send the Holy Spirit who would lead us into the WHOLE truth.

I was born in a Christian family but I have come to be a staunch Christian after searching for inconsistencies and finding none to this day.

I believe the true religion is one that has answers for everything. By the revelation of the Holy Spirit, I have been able to understand knowledge spanning from Mathematics, to Science, to Biology, to Philosophy all from the Bible and I’m still learning more each day.

It baffles me to say the least.

And with that, the words of Apostle Paul have become true for me…

12 That is why I am suffering as I am. Yet this is no cause for shame, because I know whom I have believed, and am convinced that he is able to guard what I have entrusted to him until that day.