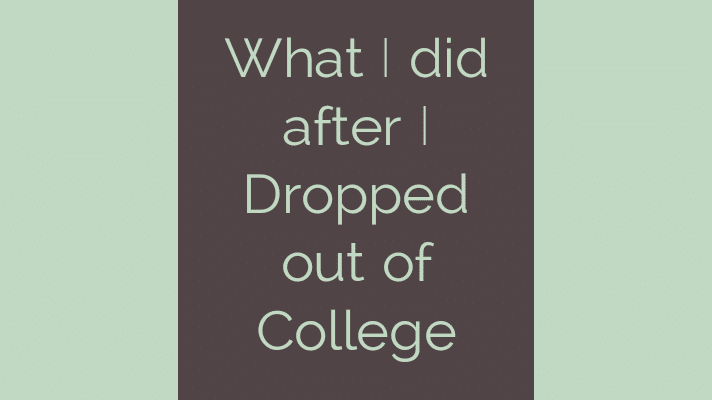 Today I am answering the question ‘What did you do after dropping out of college?’. I dropped out of college and managed to remain sane.

I say I managed to stay sane because on many occasions I felt I was going insane. I would wake up one day feeling great (rarely) and the next feeling like the worst loser on earth.

If you just dropped out of college and you are feeling lost, make sure to read my article on what to do if you feel lost after dropping out of college.

In this article, I will be sharing three things I did after dropping out of college, which helped me successfully get to where I am today. To get my full story of how I dropped out of college, check out my eBook.

What did you do after Dropping out of College?

My first attempt was in writing articles for websites. I signed up at iWriter where bloggers looking for content for their websites meet writers.

At that time, my writing was very poor. I wrote three articles for three different clients but all of them were rejected. I was devastated!

My account was also banned for repeatedly offering poor quality.

I decided to try another form of writing other than writing articles for websites.

A friend of mine introduced me to academic writing. Academic writing is basically doing assignments for college students and getting paid.

It sounded unethical to me but I was desperate to make money. Unlike article writing, academic writing didn’t need much creativity. Luckily, I managed to land several jobs within the first week. I made a whooping $65.

Though academic writing was promising, I quit it after working for only a week. My heart hated the fact that I was doing something I knew was unethical and it also reminded me of the college experience, which I hated bitterly.

With no success in writing and an urgency to get money, I decided to give casual jobs a try. I quickly learned that I hated being told what to do. I was a terrible employee.

My focus shifted from looking for casual jobs to starting casual businesses. I tried selling whatever I could sell online but I had no success.

Related Post: 5 Signs College isn’t for you and what to do

Months passed but I never settled on any business.

Eventually, I decided to go back to writing and ‘force’ it to work. I knew I was a poor writer but I became determined to succeed with writing at whatever cost.

When writing articles for other websites failed a second time, I decided to start my own website. That is when I started creating free websites on WordPress.

I would write all manner of junk on the free websites. Eventually, my writing improved and when I tried writing for other website owners for the third time, I got some success.

Since then, I began writing for other websites while learning to create my own. That is how I ended up creating the blog you are reading right now.

When I look back at the days I tried many businesses after I dropped out of college, I am grateful because trying many businesses helped me know what I was passionate about.

Life after dropping out of college is confusing. It is difficult to get direction in your career after you drop out of college. The best thing you can do is try as many options as you can.

In no time, you will start noticing your natural inclination. I never knew I hated employment until the day I got employed. Though my writing skills were poor, I realized I enjoyed writing.

One step will always lead to another and before long, you will find yourself on a career path that gives you fulfillment.

Read Also: Feel like a Failure after Dropping out of College? Do this

I specifically focused on three areas in the self-education space:

Since childhood, I had never examined my boundaries. My relationships were terrible and there was all manner of abuse in my relationships.

Immediately after I dropped out of college, I began learning about developing healthy boundaries. I read an incredible book called Boundaries by Dr. Henry cloud. It helped me see the different forms of abuse I was suffering unknowingly.

The book was a perfect stepping stone for me to venture into the world. Since the world is driven by relationships, it made sense for me to learn how to relate in a healthy way.

After I began focusing on boundaries and relationships, it was only a matter of time until when I began learning about dating.

I had barely dated before. My knowledge on dating was limited. With the knowledge I had gained on boundaries, learning about dating was easy.

I did not only read about dating but I also approached a few girls though things didn’t go as I expected. Despite the disappointments, I was grateful that I was making progress which I doubt I would have made had I not dropped out of college.

One of the best decisions I ever made after dropping out of college was the decision to learn about general finance. I watched random videos on YouTube about investing, saving and managing finances.

I read most of the popular books on investing and they really helped me get a different perspective about making money.

Instead of merely focusing on getting money for my next meal, I began developing long term financial goals. I switched from being the person who grabs every money opportunity to choosing only opportunities that are in line with my personality.

I have continued to learn about finances and I give all credit to the seed I planted after I dropped out of college.

Reading books after Dropping out of College

Knowledge is essential if you want to have a bright future. But then the type of knowledge you acquire matters. Whatever was being taught in college was knowledge but I doubt it would have benefited my life as much as the knowledge I acquired from self-help books did.

Therefore, consider gathering knowledge on important areas of your life after you drop out of college. You’ll do much better than if you sit back and drift along in life.

3. I Changed my Friends after I Dropped out of College

I’m sure you have heard the saying ‘You are the average of the five friends you spend most of your time with’. That is true.

When I dropped out of college, I found myself in an unfamiliar world which most of my previous friends had no idea existed.

They didn’t understand why I dropped out of college and no matter how hard I explained, they never understood. I wasted away everyday trying to teach my friends factors I had considered before dropping out.

Eventually, I learned that my friends would never understand why I dropped out of college. At that point, I began distancing myself from them.

Distancing myself from them meant that I had nobody to call a friend. For several months, I lived in my own world with no one to share my pain with.

Life would weigh heavily on me at times and all I could do was sit on my bed and cry. Staring at the ceiling became my hobby. The emptiness of the pure white ceiling offered me the necessary escape from reality.

After spending several months on my own, I met a friend of mine who had also dropped out of college. It was relieving to meet someone who could understand the pain and loneliness I was suffering.

He had also been suffered as I had after he dropped out of college. We began having long conversations over the phone on a daily basis.

I visited him frequently and with the visits came new opportunities to meet new people. Some of his friends would visit when I was at his place and I got a chance to interact with them.

Slowly I got accustomed to his friends while the distance between me and my old friends who were still in college grew.

Though most of his friends had completed college, they understood why someone would drop out of college. Together, we would talk about productivity and making our lives better.

We would discuss about investment conferences and the investment strategies that were doing well at that time.

When we were done talking about investments, we would go jogging and do general workouts. It was refreshing to have friends who were thinking about progress and productivity.

Read Also: Are you Failing in College? Here is the best thing to do

After several months of our friendship, each one of us got engagements, which slowly distanced us. But by the time we began getting distanced, I had gained enough motivation to keep pushing for a life of success.

She suggested to me her best reads and sure enough, when I read them, they were incredible. One of them was the book called Boundaries that I mentioned earlier.

With such new friends, my life became much better. Since I dropped out of college, I had been feeling isolated from the world but I had found friends to warm up my lonely cold world.

One of the important steps to take after you drop out of college is to find new friends. Your old college friends will only make your life miserable with their nagging.

When you drop out, you will most likely be isolated for a while. It takes a bit of time before getting good friends but don’t give up, they will come.