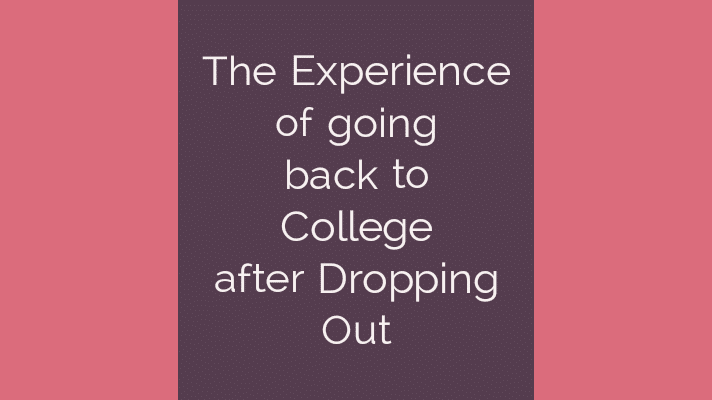 I’ll be talking you through these three steps basing on my own experience. Going back to college, just like any decision, can work for you or against you.

On the other hand, going back to college after dropping out increases your chances of gaining more from college than the average student.

Going back to College after Dropping out

Once you have tasted the real world life, when you go back to college, you will fare on a lot better. For example, if you are single and you know how difficult it is to find a partner in the real world, you will maximize your opportunities in college.

Read Also: 3 Freshman Mistakes I made in College (Avoid them)

The average student in college dates for fun hoping to get a serious partner once they are out of campus. What they don’t know is that it is easier to find a partner in the University than outside the university.

Also, average University students are careless with their life; they don’t think about what they will do after graduating. But if you have lived the real world life before going to college, you will be more proactive in planning what to do after college.

Before I dive deep into the topic, I have narrated my full story of how I dropped out of college in an eBook which you can find using the link I’ve provided.

The eBook narrates in detail how I began contemplating dropping out of college, what led me to drop out of college and the dramatic experiences I had after dropping out including a bitter confrontation with my dad who is a University lecturer.

Your Reason for Dropping out

People drop out of University for different reasons. Some of the reasons have nothing to do with college.

However, in my case, I dropped out of College because I hated it. I didn’t drop out because of only one reason but it was a pile of reasons.

When my first days in college didn’t go as good as I had expected, I began hating the University experience. From that point onwards, I found more reasons that made my resolve to drop out strong.

As far as I know, a good number of people drop out of University for financial reasons. Some drop out to avoid piling up debt in their life, which is often a good idea. Others drop out simply for lacking money to pay for University education.

Dropping out because of finances never has a big dent on people when they finally choose to go back to college. Once they find funding, they are set to return.

The challenge of going back to college faces those students who dropped out for having grievances against college itself.

In most cases, such students are normally very intelligent and they can run their own businesses and make money. Since they have the ability to make a living without college, going back becomes a useless venture.

Most often, they only think of going back to college because of the pressure they get either from parents or friends. It is rare for such students to change their mind about college education.

I was ‘unfortunate’ to be such a student. I fell in love with writing that I decided I would never go back to University. The University degree was a worthless paper to me. I still hold that belief to some extent despite having enrolled back to the University.

The point I want to make here is that you have to overcome the main reason why you dropped out of school in the first place for you to manage going back.

Solving the reason why you dropped out of College

In my case, it took me about three years to finally get my hatred for College to a level where I could tolerate going back. Within those three years, I was being pressured to go back but I kept telling them I was not yet ready.

Even on the day that I finally reported to College, I felt I was going to quit before the end of the first week. It was so difficult to convince my mind that going to College was okay despite the grievances I had against University education.

How long you have stayed out of College

The truth about life is that you get used to the lifestyle that you live on a daily basis. When you drop out of college, you will automatically adjust to the real world life.

The real world life has unlimited options and you get no clues on what to pursue. In college, you are given a timetable and specific units that you will be covering.

The structure in College takes away the burden of making choices.

When you drop out of college, you develop the hustle mindset. You toughen up and become a quick thinker. Instead of waiting for instructions, you create your own instructions.

The mobility that comes with the real world life makes it so exciting. The thought of going back to College where you are told what to do feels like slavery.

The hatred for College routine becomes worse the longer you stay out of College. If you plan to go back to College, you have to do it sooner rather than later.

Once you get established in the real world life, College life will become extremely boring. It is a good idea to go back to College before finding footing in the world outside college.

Progress in Life outside College

College education is primarily a way of preparing students to face life outside College. It makes sense to go to college to learn how to live once you get out.

But if you already know how to navigate the real world life, you have no reason to go to College. It is hard to convince your mind to switch back to the routine of College if you can fare well in the life outside college.

Many students who become rich while in college end up dropping out. They see no point of being in College. As some of them put it, ‘the only important thing in school is to learn how to communicate and count.’

If they can make money, College is worthless.

Therefore, depending on how good you are in the life outside College, going back to College might be easy or hard.

In my case, by the time I returned to College, I was just about to start making a full time income from blogging.

Having to sacrifice my blogging time in favor of college studies was not easy. To convince myself that it was worth the sacrifice, I chose to study web development.

At least I was convinced whatever I would learn in school would be helpful in my blogging business.

If you are torn between going back to college and forging on with life, consider consulting a life coach on the best way forward based on your situation.

Each person’s case is normally unique. There can never be one decision that is right for everyone. It is only through a one on one talk with a coach that you can find advice that perfectly suits you.

In the end, you are the only one who will live with the results of the decision you make. Be wise!