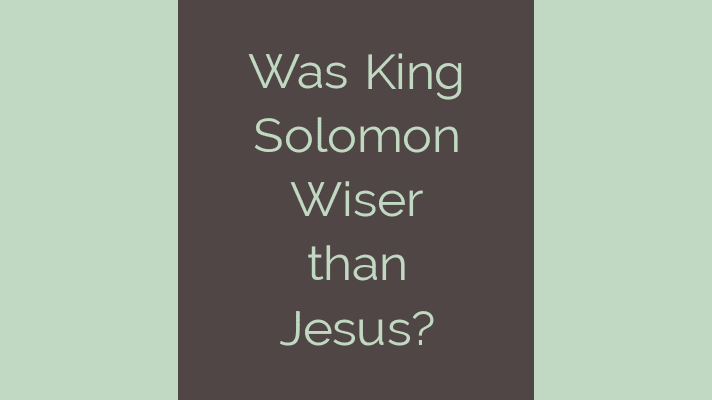 God gave King Solomon wisdom that was greater than anyone who had lived before him and was to be greater than everyone who would come after him.

But then we know that Jesus came after King Solomon. This makes us question if King Solomon was wiser than Jesus.

The Bible describes Jesus as the wisdom of God.

This neither refutes the fact that King Solomon was the wisest man ever nor does it claim that he was wiser than Jesus.

The world marveled at the wisdom of King Solomon. The queen of Sheba testified of the greatness of Solomon’s wisdom. The splendor of King Solomon we are told was like nothing ever seen.

At this point, God was giving us a glimpse of what a great measure of wisdom can do.

When Jesus showed up, He introduced a dimension of wisdom that dwarfed that of King Solomon.

While King Solomon had many earthly possessions to back up his wisdom, Jesus barely had anything yet Jesus achieved what King Solomon could not achieve; He saved men from sin.

King Solomon prevented Israel from conflict all through his reign but after his reign, Israel experienced the worst ever violence to date.

Jesus introduced conflict with the world but the conflict leads to eternal peace.

To compare the wisdom of Jesus to that of King Solomon is impossible.

King Solomon came before Jesus to give us a perspective of wisdom before wisdom itself showed up in the form of Jesus.

This happened that we may esteem Jesus above all.