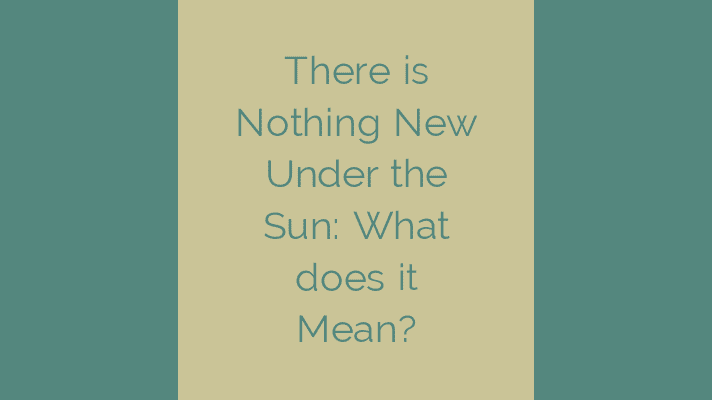 There is nothing new under the sun; this is a common phrase from the first chapter of Ecclesiastes. But to some people, seemingly, there are new things under the sun. What then does this scripture mean?

The phrase under the sun refers to the entire universe or in Biblical terms, the earth. We know that according to creation, there is heaven and earth where heaven is God’s throne and the earth is his footstool.

God is the source of all good things. When God created the earth and planted a garden on it, He was doing a new thing. We are told the earth was formless but as God spoke it gained order.

The order on earth continued until the day Adam and Eve disobeyed God. From that day, God ceased doing new things on earth and it began disintegrating back to its original formless nature.

Everything has since remained the same; such as the inclination of the heart of man on evil, seasons on the earth, unending trouble for the inhabitants of the earth etc.

However, there have been a number of new things that God has done under the sun such as when the ground opened up to swallow the rebellious camp of Korah, Dathan and Abiram.

Moses asked God to punish the camp of Korah, Dathan and Abiram with a new punishment never seen under the sun so that the Israelites would know that Moses was sent by God.

Jesus dying on the cross for our sins was also a new thing under the sun; no man had ever given up his life for another out of love.

To this day, there is nothing new under the sun except activities that God initiates through those who are obedient to Him.