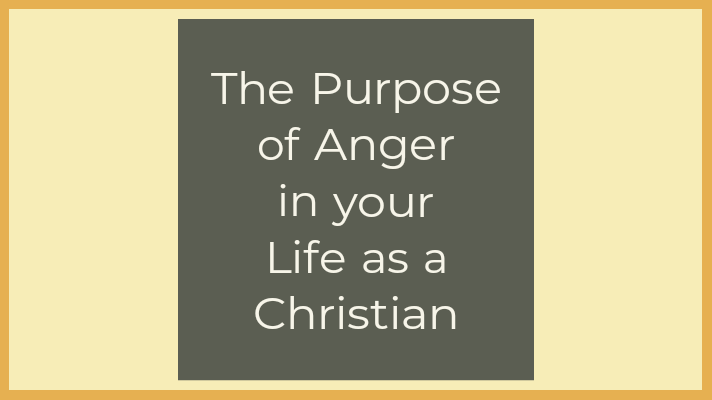 Anger has a purpose in our lives as followers of Christ. It is our responsibility to know it.

In this article, I will talk about the purpose of anger in the life of a Christian.

Why Should Christians get Angry

As Christians, we need anger for us to hate evil. When we encounter injustice, God has designed our hearts to get angry at it.

The anger we have against injustice is supposed to help us take action against the injustice we witness.

Whenever you get angry, there is a surge in energy. That energy is God given for you to deal with the evil you have seen.

The Case of Samson

This is why God put a desire in the heart of Samson for a Philistine woman. We are not told that God wanted Samson to marry a foreign woman but rather that He only wanted to use it to cause Samson to be angry at the Philistines.

Actually, if you read carefully, you will realize that Samson never got the girl that he desired. It only caused him to be angry against the Philistines.

Because of the frustration that the Philistines caused Samson, he got angry at them and did a great deal of destruction. That is what God wanted.

The Challenge of anger

In the beginning, Samson was doing everything as God intended but then along the way Samson allowed his anger to drive him into defilement.

Whenever you get angry, the challenge is to use the anger to do good. Since anger is neutral, it is up to you to decide what to do with it.

Read Also: How we will Live in Heaven without Disagreements

If your spouse stirs up your anger, you can use the anger to fight or pray. Fighting is the natural man’s reaction but prayer is the spiritual man’s response. God expects you to let your spiritual man handle your anger.

During the ministry of Jesus, He encountered people who didn’t believe in Him. Jesus performed miracles to stir up the faith of the people but some completely refused to believe that He was the son of God.

But we don’t read of any instance where Jesus cursed those who did not believe in Him. Instead, He persisted with great love to win them over.

Jesus became an example for us on how to handle anger.

The other purpose of anger in your life as a Christian is to reveal the anger of God. There is nothing that will anger a believer of God that does not anger God.

When you go to preach to someone to give his life to Jesus and the person refuses, you are likely to get angry. God too gets angry at the person who is rejecting salvation.

Once you know that your anger is a reflection of God’s anger, you can work to sooth the anger of God. When Jesus got angry at those who didn’t believe in Him, God too got angry at them for not believing in His only Son.

God, obviously, wanted to destroy them as He used to do in the Old Testament but Jesus knowing that God was angry at them would pray for them.

Read Also: Sermon ‘As a Dog Returns to its Vomit’|Proverbs 26:11

For the people who go to Hell, it is because they reject Jesus and therefore He can’t ask the Father to withhold His anger against them. God then, in His anger, sends them to Hell.

We too as believers can be mediators. When someone does evil against you, God gets angry at the person and is ready to destroy him. But once you pray for God to have mercy on the unbeliever, God listens to you. When the unbeliever gets saved, God rewards you for his soul.

Pray that God helps you to use your anger in a manner that will please Him.