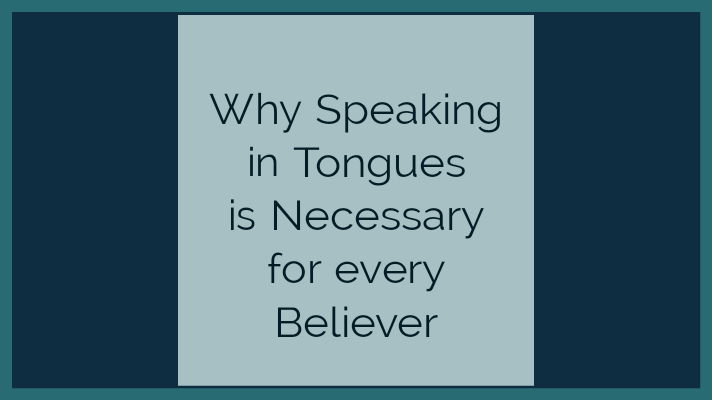 There are many documented reasons why speaking in tongues is important. Paul wrote about it saying whoever speaks in tongues edifies himself (1st Corinthians 14:4).

The aim of this article is to help you get understanding of how speaking in tongues works and to have faith in it.

The Old Pattern of Prayer

In the Old Testament, speaking in tongues was not given to believers. They heard God in their natural languages and they prayed to Him in the same languages.

What used to happen was that God would speak to the spirits of men and then their spirits would relay the information to the soul. The soul which is the mind would then conceive the communication and the prophets would utter.

Read Also: The Poor you will Always have with you Meaning (Matt 26:11)

In other circumstances, God would speak in the physical in a language that the mind can understand. Remember how God called Samuel three times at night? The problem with this kind of communication was that it would scare the person God was speaking to (Exodus 20:19).

Also, it was hard to speak to individuals since everyone could hear and understand. At the same time, very few people were able to get communication from God because of the high levels of holiness it demanded.

Remember the magicians in Babylon who could not interpret the writing on the wall until Daniel had to be called to interpret it? (Daniel chapter 5)

With such a ‘not so perfect’ way of communicating, there was little direction for people from God. Imagine the whole camp of Israelites depended on Moses to hear from God for them.

For an individual who had a personal question for God in the camp, how could he get an answer? Certainly, Moses could not relay all the information for all individuals.

When Christ came to perfect what Moses had begun, He perfected the mode of prayer too. We are told several times in the Old Testament that the hearts of men were wicked.

5 The Lord saw how great the wickedness of the human race had become on the earth, and that every inclination of the thoughts of the human heart was only evil all the time.

The heart is deceitful above all things and beyond cure. Who can understand it?

Who can say, “I have kept my heart pure; I am clean and without sin”?

Jesus echoed the same message when He mentioned that out of the heart comes all manner of filth.

Read Also: The Kingdom of God is like a Merchant Looking for Pearls

And then He also mentioned that human beings only speak what has overflown from their hearts.

34 You brood of vipers, how can you who are evil say anything good? For the mouth speaks what the heart is full of.

That means that even the prayers that people prayed were corrupted since they came from corrupted hearts. Remember story Jesus shared of a Pharisee who was bragging about the good he does in prayer? (Luke 18:9-14)

Remember also Jesus rebuking people who would go to pray in public places so that people see them (Matthew 6:5). All those people might have been meaning well but the pride in their hearts got mixed with their prayers.

To solve the problem, God introduced speaking in tongues.

How Speaking in Tongues Works

Unlike the old pattern, the new pattern omits the involvement of the mind in prayer. In the new pattern of prayer, the Holy Spirit reveals to your spirit what needs to be prayed for. And then your Spirit utters directly without translating the message to the mind.

That is why Paul said whoever speaks in tongues speaks to God and not men, for no man understands him but in Spirit he utters mysteries (1st Corinthians 14:2). There are two benefits of omitting the mind in prayer: It disables disbelief and prevents the wickedness of the heart from contaminating the prayer.

That means praying for them becomes difficult too. We may try and pray for them to fulfill God’s word but we will have a negative attitude in our hearts.

But with speaking in tongues, we can pray for them without having to struggle with negative attitudes in our hearts because our minds don’t know that we are praying for them in the first place.

Also when we are praying for mega things, there is a high tendency to doubt. Our minds are heavily limited in terms of imagination. But when the spirit prays, it prays for the mega things with zero disbelief.

In some cases, the tongues are interpreted because the mind needs to get that specific information. The spirit may ask God for you to be delivered from a temptation that is coming.

That is when you get an urge from the spirit to use another path, what people normally say ‘something told me…’ The spirit may reveal to you the reason why you need to change the route or it may keep it secret.

Imagine someone who struggles with lust. The spirit sees the devil has set a trap for him in the hotel where he wants to go take a meal. Before this man leaves the house, the spirit urges him to pray. He doesn’t understand what is wrong but just feels a strong urge to pray.

When he obeys and speaks in tongues for a few minutes before leaving, the spirit petitions to God for him. God then speaks to his spirit to lead him to a different hotel.

His spirit then discourages him from going to the hotel he had planned to go to. The spirit however, does not reveal to him the reason why.

Reason being if he knows that it is a trap to lust, he may be overcome by the flesh and end up taking himself to the hotel to get that opportunity.

That is why the Bible insists that we walk in the Spirit (Galatians 5:16).

Speak in tongues as much as you can and only pray in understanding when the Spirit asks you to do so. Then be careful to follow the leading of the spirit.

Speaking in tongues is a critical tool in helping us communicate with God. It is a perfect way of praying. Our God is so loving!  He gave us such an ability to communicate with Him. To Him be all the glory and honor forever and ever, amen!