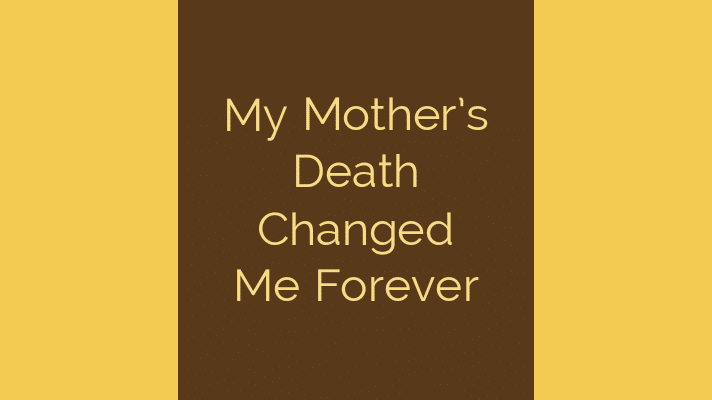 My mother’s death changed me forever. Nobody oriented me on how to live after losing a mother. Even if I was to be oriented, who would be my teacher?

The first few years after losing my mother, my life was heading in the wrong direction. I got scared and decided to work to change the trajectory that my life was taking.

Sure enough, after several years of intentional work to change the trajectory of my life, I began seeing a positive trend.

I have never looked back ever since.

Read Also: Should I View my Mom’s Body?

In this article, I want to share how my mother’s death changed me forever.

If you lost your mother, you can borrow the strategies I used to navigate the period following the death of my mother.

My Mother’s Death Changed Me Forever

Before losing my mother, I used to cry over little things. I was a teenager. The crying was not literal but figurative.

If I didn’t have enough money, I would pile my frustration on my mother. If a friend of mine said something nasty about me, I would tell it to my mother.

My mother was the destination whenever anything bad happened to me.

We all know that mothers are caring. No mother will watch as her child suffers. Mothers do their best to make sure that their children are as comfortable as they can be.

My mom was no exception. She bore most of my pain and struggles. She offered help in many ways.

After she died, I was left on my own.

I never had any other person who could bear my problems. The only close person I had was my sister but she was too distressed after the death of my mother that I didn’t bother telling her my struggles.

I began learning how to handle problems on my own.

When you lose your mother, you lose a close person who is willing to listen to all manner of issues you have.

From the day your mother dies, you will have to learn how to handle your personal issues without her.

If you depended on your mother for many decisions, you will have a hard time transitioning to making those decisions yourself.

When your life becomes stressful, you won’t have your mother’s shoulders to lean on. Life after the death of your mother is tough.

The first few years after your mother’s departure are the worst. But if you remain consistent with learning to take responsibility, you will soon master the art of living without a mother.

Read Also: Should I Attend the Funeral of my Abusive Mother?

After my mother died, I developed a deep longing to have a girlfriend. I thought it was a normal occurrence for a teenager. I didn’t realize that the normal attraction I had for females was being fueled by the lack of female attention that my mother used to provide.

The few years that followed the death of my mother were dramatic. I tried getting into relationships that ended up causing me more harm than good.

It was only after I carefully studied my motivation to get a girlfriend that I realized I was affected by the death of my mother.

I was craving for female attention.

After losing your mother, if you are not married, you will find yourself having a strong desire to get a girlfriend.

If your mother used to fill the gap of female attention for you once she is gone, your mind will want to get someone to fill the void.

If you are not careful, the desire to get female attention can lead you into deep trouble that will change your life forever.

After I realized that I had a problem with female attention, I stopped seeking to have a girlfriend and instead began working to heal from the loss of my mother.

Having a girlfriend was never going to fill the gap of female attention because no girl was ready to treat me the same way my mother treated me.

It was after that decision that my life began stabilizing in the area of relationships.

Be very careful with your relationship with females after the loss of your mother. You may easily find yourself demanding your female friends to treat you the way your mother treated you.

Trying to get someone to fill the void your mother left will always end in tears.

Living without Fear after Mother’s Death

After the death of my mother, I lost majority of the fear of death I had. What else would I fear about death when my mother was already gone?

I lost several other relatives after my mother’s death but their deaths never distressed me like my mother’s.

I have found out that I am more tolerant to the news of the death of a loved one after my mother’s death than I was before.

Death has become the occasional visitor I am used to. I got to a point of accepting that life on earth is temporal. Live the few days you have and go your way in peace.

The changed view of life after the death of my mother has greatly helped me live life to the fullest. Fear of death no longer scares me.

You may dread the life you will have after your mother’s death. But once she is gone, there is nothing more to worry about.

All that is left is for you to carry out the assignment you have here on earth and wait for your appointed day to face death.

Read Also: My Mother Died and I didn’t Cry; Am I Normal?

For you to have a positive change after your mother’s death, you have to consciously work on improving.

The work of making your life better after your mother’s death is not easy. It may take you many months to get stability.

Still, working to improve your life is the best thing to do after you lose your mother.

Your life will change after your mother’s death but it is your responsibility to make sure that the change is positive.