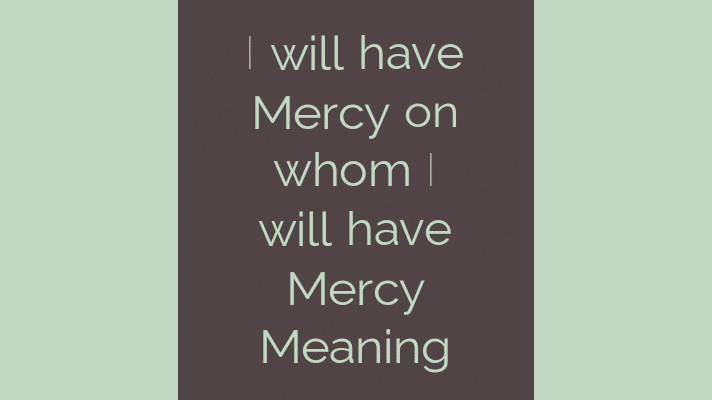 What did God mean when He said He will have mercy on whoever He chooses? Is the God we serve not merciful?

For a while, I battled to understand this statement. When I first read it, it seemed to me God is brutal. But deep down I knew the God I serve is merciful.

I decided to dig deep to understand God’s will when it comes to showing mercy. I have met a few atheists who claim that God is brutal.

They often refer to this verse and the events recorded in the book of Numbers to back up their argument that God is brutal.

I know there are innocent Christians who also struggle with this statement. From the inside, they know that God is merciful but for some reason this statement makes God appear brutal.

Read Also: How to Know if God wants you to have a Baby

I will share with you what I found out when I sought God about His will concerning showing mercy.

What is God’s Definition of Mercy?

According to God, mercy is the act of not treating us as our sins deserve. It is very clear in the law of God that a soul that sins shall die. But then God is merciful enough to give souls that sin a chance to live.

Mercy is God’s choice not to punish us when we do evil. I know this statement already raises the question why then do sinners end up in hell if God’s mercy removes the punishment we deserve? Is God not merciful?

God is merciful but then He also has a law which He must live by. God’s law dictates what is acceptable before God and what is not acceptable.

When sin is found in the presence of God, whoever is holding that sin will be put to death. But then instead of killing the person who holds sin, God decides to drive the person away from His presence.

If the person is away from God’s presence, even though he has sin, God spares his life. This is what happened in the Garden of Eden.

According to God’s law, Adam and Eve were to die. But God had mercy on them. Instead of killing them, He sent them away from His presence.

To this day, we don’t have direct access to God because we still have sin. We can only access God through our mediator Jesus Christ.

The devil hates us because God never showed him mercy. When iniquity was found in the devil, he was cast out of heaven and no redemption plan was made for him.

When the devil caused man to eat the forbidden fruit, he expected man to face the same punishment he had faced. But God was merciful on man; He put into action a redemption plan.

God created man for fellowship not for destruction.

God has been and still shows us mercy in uncountable ways. If we were to be judged according to God’s law, we deserve the same punishment as the devil.

Read Also: What does God say about Earthly Fathers?

To this day, we still do actions that grieve God. Some of the actions we do arouse the anger of God. But God repeatedly remembers mercy in His anger.

When King David counted the number of soldiers in His army, God became angry with Him. God had helped King David win battles but then David was attributing the victories to the number of his army instead of the Lord.

God sent out a punishment in His anger. An angel went out and killed seventy thousand Israelites. When King David realized what he had done had angered God, he pleaded for God’s mercy.

God, out of His great mercy, withheld the punishment.

Were it not for God’s mercy, only Joshua and Caleb would see the promised land.

God’s greatest act of mercy has to be that of tolerating the Romans who crucified His only son. Think of it, what would you do to someone who kills your child who has done no wrong?

God’s anger burned against the Romans and the people who rejected Jesus. But God in His mercy didn’t consume them with fire.

If God chooses to show no mercy, no one has a right to be angry at Him. God is the maker of all things. He owns everything and so He has a right to treat His creation as He pleases.

Don’t we treat what we have created as we please too?

But despite God’s freedom to do as He pleases, He chose to make Himself subject to the same law that He gave us.

Before God punishes us for not forgiving our neighbor, He makes sure He has forgiven His neighbor. Jesus forgave us (His neighbors) for crucifying Him when He had done no wrong.

Jesus Himself said that blessed are the merciful for they shall obtain mercy. If your friend betrays you and you forgive him, God (your friend) will also forgive you when you betray Him.

If your wife hurls insults at you and in your mercy you don’t punish her, God (your husband) will have mercy on you on the day you hurl insults at Him.

Rahab had mercy on the two spies that went to Jericho. She chose not to expose them and because of the mercy she had on them, her house was spared when God destroyed Jericho.

In simple terms, God was stating that He has the right to show mercy on any person He wishes to show mercy. But then later on in the New Testament, God makes it clear that He follows a law to decide whether to show mercy to someone or not.

Read Also: What is God’s Purpose for Women?

God revealed this law so that we can understand how He shows mercy and align ourselves to receive His mercy.

If you want to receive mercy from God, show the same mercy to others.

May God help us!