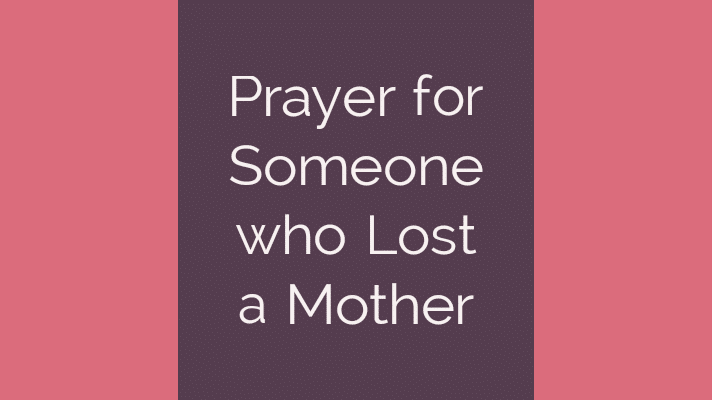 Saying a prayer for someone who lost a mother is comforting. This is a guide of how you can pray. But before I get into details, I want to talk about a few issues you need to align before you start praying.

Praying for someone who lost a mother will also give the bereaved person strength even if they have no idea you are praying for them.

One thing you are to avoid is telling the person who has lost a mother that you are praying for them when you are not praying.

What is the point of telling a bereaved person ‘my prayers are with you’ yet you are not praying? Do it in action and let your words follow if they must.

Prayer for Someone who lost a Mother

When praying for someone who lost a mother, ask God to help them find comfort in Him. Jesus already told us that in the world we will have tribulation but in Him we will have peace.

Read Also: Going back to School while Grieving the Death of a Parent

The death of a mother is a painful experience. At the same time, it is a worldly experience. For someone who is bereaved, he can only find comfort in Jesus.

Remember when Jesus visited the home of Lazarus and met his sister Martha; Jesus told her He is the resurrection. Having Jesus gives comfort equal to that of having the dead mother coming back to life.

Many times when we pray for a bereaved person, we pray that God may give them peace. But the right way of praying is to ask God to lead the person who is bereaved into Jesus.

All peace is found in Jesus. Away from Jesus there is no peace.

There is not much you can pray for someone who has lost a mother.

The strength God expects us to ask for is the strength for the bereaved person to keep his faith. Losing a mother can wreck someone’s life to a point that they leave the faith.

For some people, it is the dead mother that led them to believe in Jesus. With her demise, the person can easily switch back to his old ways.

The strength God provides will keep the person who has lost a mother trusting in Jesus despite the difficult time he is going through.

For other people, we are to ask for strength for them so that they don’t stay victims of their mother’s death forever.

If the bereaved person had a very close relationship with the dead mother, there is a possibility for that person to get stuck in mourning the mother.

It takes the strength that God provides for a person who has lost a mother to get over it and keep trusting God.

I have witnessed people who lost their mothers and became bitter at God for allowing such pain to come to them.

In the end, they resented God to their own destruction.

Helping someone who has lost a mother is a delicate affair and it takes God’s hand to help the person navigate the grieving season while still holding on his faith.

Read Also: What to say During your Mother’s Funeral to Honor Her

The strength you pray for the person who has lost a mother to receive will also help the person serve God after the grieving season.

Since a lot of strength is needed to remain sane after losing a mother, a bereaved person may use up all his strength and have nothing left to serve God.

It is common to hear of people who stopped serving God after losing their mothers.

Your prayers for someone who has lost a mother to receive strength are instrumental.

Wrong Prayer for Someone who lost a Mother

Sometimes we make prayers for someone who has lost a mother but the prayers are wrong. Such prayers are a waste of time because they won’t get answered.

Here is common mistake people make when praying for someone who has lost a mother;

Praying for the Dead Mother

Nowhere in the Bible are we instructed to pray for the dead. The reason is because a dead person no longer has any hope.

No matter how much you pray for a dead person, nothing about them will change. When someone dies, their fate is sealed.

When Jesus went to the home of Martha and Mary, He raised Lazarus from the dead. There is no record of Jesus asking for the soul of Lazarus to rest in peace.

We are only told that Jesus called Lazarus out of the tomb in a loud voice.

Praying for the dead mother to rest in peace is a foolish prayer. Death is common to men and God knows it.

We have also been taught clearly in the Bible that the dead have no connection whatsoever with the living. Once someone dies, their judgment is passed.

In the book of Ecclesiastes, the teacher says that the living have hope because they know they will die but the dead know nothing.

He also emphasizes that once someone dies, she has no idea of what goes on under the sun.

Read Also: My Boyfriend Lost his Mother: How can I help him?

This is a clear indication that once someone dies, we lose all ties with them.

Prayer for Someone who Lost a Mother: Conclusion

Spend time in prayer for your friend who lost a mother but be wise when making your prayers. We have the eternal life of God in us; we are not to mourn as the world mourns.

Apart from your prayer, be close to the person who has lost a mother. Your presence is a powerful tool that God gave you to comfort those who mourn.

Allow the bereaved person to mourn but make sure he doesn’t lose his faith in God in the process.

Be a good comforter just as our God is!