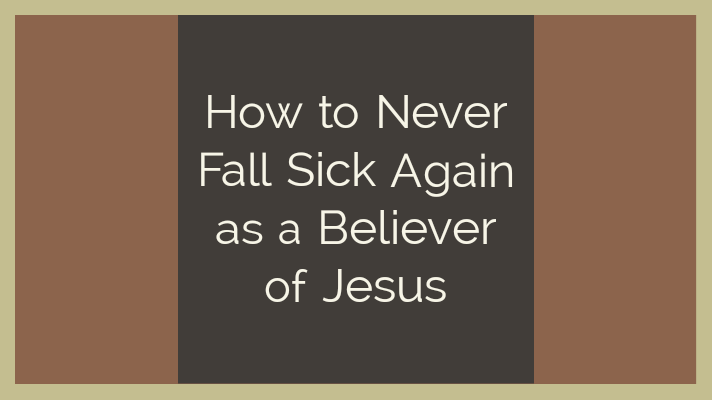 It is puzzling why believers sometimes get sick. In their sickness, they pray all manner of prayer and quote ‘By His stripes we are healed’ but nothing happens.

Some have concluded that healing is only spiritual. Others believe that healing only happened during Biblical times.

But the reality of the matter is that the Bible is very clear about why a believer should NEVER be sick in body. This article is an explanation of why believers get sick, why they should not be sick and how to get guaranteed healing.

The key in this whole study is to UNDERSTAND. You’ll realize that the scriptures quoted here are all familiar but the new understanding is what will make the difference.

Why does God allow His followers to get sick when He can heal them? Well, here is the good explanation.

Read Also: Why Obeying God seems Hard and How to Make it Easy

First, there are three causes of diseases; curses, demonic oppression and human irresponsibility.

Curses stand for a huge portion of sicknesses. Every curse comes with a specific disease. Remember the curse that came upon Gehazi?

26 But Elisha said to him, “Was not my spirit with you when the man got down from his chariot to meet you? Is this the time to take money or to accept clothes—or olive groves and vineyards, or flocks and herds, or male and female slaves? 27 Naaman’s leprosy will cling to you and to your descendants forever.” Then Gehazi went from Elisha’s presence and his skin was leprous—it had become as white as snow.

Gehazi was cursed for taking possessions from Naaman and lying to the prophet. Note that the curse extends to his descendants forever.

That means that for anyone who was born in the lineage of Gehazi had a curse of leprosy. It doesn’t matter whether they loved God or not. God is a covenant keeping God.

The only way a descendant of Gehazi can escape that curse is if they break the curse.

Many believers today suffer sicknesses that result from curses. Unless the curse is broken, it doesn’t matter if you are an apostle or a normal believer. Heaven is faithful to covenants.

Breaking the curses also has to be done in the right way. A mere quote of Christ becoming a curse for us won’t break a curse. Remember the curse was initiated by a faithful servant of God.

Another version of sickness as a result of curses happens when people sin against God. Some diseases will only disappear after the sin that caused them is forgiven.

5 When Jesus saw their faith, he said to the paralyzed man, “Son, your sins are forgiven.”

The disciples also knew this and that is why when they saw a blind man they asked Jesus who sinned that the blind man was born blind (John 9:2).

Clearly, we see why many innocent believers suffer sicknesses. The best God can do if your sickness is caused by a certain sin or curse is to reveal to you the cause. It is then your responsibility to repent of your sin or break the curse.

Once you do that, the sickness will go by itself.

It is surprising that some believers suffer sickness as a result of demonic activity. Demons know the laws of the heavens and they come to oppress people whenever they find a foothold.

This type of sickness mostly comes because of disobeying God or people in authority. If you harbor unforgiveness, it opens a door for demons to oppress you.

Demons responsible for certain diseases come into your life to oppress you. You can be serving God but you remain sick.

They only leave once you tackle the case of disobedience that invited them. This explains why some people can’t get healed even when servants of God pray for them. As long as the disobedience is still active, no healing will happen.

If the disobedience has been tackled, the demons may still be around but illegally. In that case, a simple prayer to cast them out will bring instant healing.

10 On a Sabbath Jesus was teaching in one of the synagogues, 11 and a woman was there who had been crippled by a spirit for eighteen years. She was bent over and could not straighten up at all. 12 When Jesus saw her, he called her forward and said to her, “Woman, you are set free from your infirmity.” 13 Then he put his hands on her, and immediately she straightened up and praised God.

Sickness as a result of demonic oppression also explains the case where Jesus said of the blind man that his blindness came about so that God may receive glory (John 9:2).

In that situation, God permitted demons of blindness to oppress the man. Notice that Jesus says ‘As long as it is day…’ which refers to Him doing the work of the light. The work itself is to destroy forces of darkness.

Read Also: Why Speaking in Tongues is Necessary for every Believer

The sole purpose of God permitting that oppression of demons was that He may show humanity that He is the light of the world. And with that, many came to Him including the man who was healed.

Some believers suffer sicknesses simply because they are irresponsible. If you expose yourself to a disease, you will contract it. God’s grace covers us but it doesn’t protect us against the consequences of our irresponsibility.

Many children of Israel died in the wilderness of snake bites because they didn’t look at the bronze snake that Moses had raised (Numbers Chapter 21).

Amnon became sick because of being obsessed with his sister Tamar (2nd Samuel 13:2).

Sicknesses as a result of irresponsibility are common among believers. These types of sicknesses go away with human medication. They can also be cured by prayer if God wills.

Sickness is not for Believers

Jesus came to restore all that Adam lost. Is He not the last Adam? His restoration is both spiritual and physical. If it were not physical, why did he need to be in a physical body?

Anytime someone believes in Jesus and gives Him his life, He becomes a new creation (1st Corinthians 5:17). That means, he stops being subject to EVERYTHING that is of the old nature. He becomes as good as Adam was in the Garden of Eden.

For sicknesses caused by curses, once you understand how to break curses using the sacrifice of Jesus, you’ll never suffer them again.

Diseases caused by demonic oppression will have no power over you once you learn how to tap into the power of the name of Jesus. The power that Christ gave us over demonic forces will keep all manner of demons away from you.

For diseases that come as a result of human irresponsibility, once you allow Jesus to perfect your character, you will never suffer them.

All diseases were paid for. You can only be sick if you don’t give the sickness to Jesus. What usually happens is that for a believer, any infirmity in your body is transferred to the body of Christ.

Sicknesses usually go to the stripes on the body of Christ. Anytime you pray for healing, keep that in mind. Praying for healing is all about learning how to give your sickness to Christ.

The devil puts hindrances so that you remain with the disease but once you overcome the hindrances, you will ALWAYS receive healing.

How to Get Healing Through the Sacrifice of Jesus

Anytime a believer is sick, he has disobeyed God. The Bible asks us to cast our burdens unto the Lord (Psalms 55:22). Jesus emphasized it by asking all that are weary and heavily laden to go to Him (Matthew 11:28).

When you get sick, chances are you have disobeyed the commands above. That is why the first step in praying for healing is asking for forgiveness. Say sorry for disobeying God by holding onto your burdens.

Read Also: How Moses became the most Humble Man on Earth

After repenting, go ahead and tackle the reason behind your sickness. If you don’t know the cause, ask God to reveal it to you. Ask also for direction on how to handle the disease.

Just like any other physical transaction, everything has to be in place for it to happen. Align all necessary things for the transaction to happen. Jesus is always willing to take up our burdens. We suffer because we don’t give our burdens to Him.

Once you have overcome all hurdles and completed the transaction, you will know it in your spirit. For some, healing will have already manifested physically. Others will feel a shift or great improvement.

Normally, some diseases weaken our physical bodies. When the disease leaves, you will still need to eat to recover strength.

Whatever the case, provided the transaction of giving your diseases to Christ is done, healing will manifest. Even if there was a missing body part, it will be replaced.

When you receive your healing, take time and give thanks to God. Sing praises to Him and celebrate your healing.

And then the last thing to do is to ask God to help you never to fall back to the same slavery again. Ask God to strengthen your spirit and give you discernment.

With that, you will live in perfect health all your days. When time comes for you to go back home, God will take you home with dignity and not through a disease.

Thanks be to God who Has given us freedom from all sicknesses. Glory be to Jesus who always bears our burdens. He is worthy of all honor and praise forever and ever, amen!