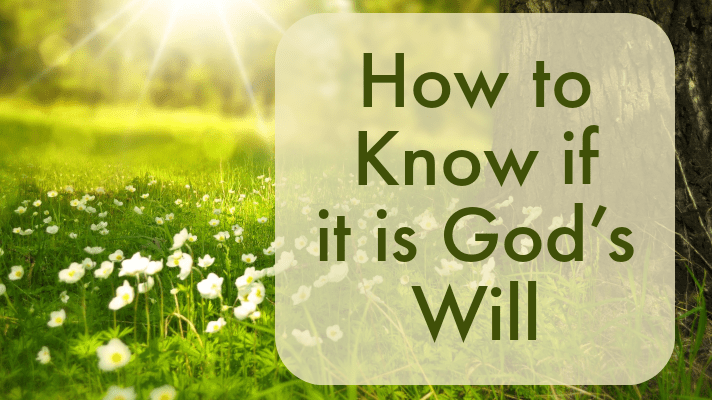 How do I know if it is God’s will? This has to be one of the most frequently asked questions by believers. The answer to this question is simple but expressing it in words can make it appear complex.

In this article, I want to give you the answer to knowing God’s will in the simplest way possible. While talking about God’s will, it is necessary to also talk about the will of man because they work hand in hand.

Read Also: Missing God’s Will for your Life: What you need to Know

Before I go to the three points, let me talk a bit about the connection between God’s will and the will of man.

God’s will and Man’s will

It is God’s will for men to use their will. In fact, anyone who refuses to use his will, will be going against God’s will. Confusing…? I hope not.

God made man and gave him a will. We can say God’s will gave birth to the will of man. With God’s will being the parent to our human will, God expects our will to align with His will the same way a parent desires his child to obey him.

At no point do men stop using their will. Every decision we make, is made from our will. But then we can make decisions in our will to align with the will of God for us.

The challenge comes in when we desire to do activities that are not necessarily God’s will but at the same time, they are not sin.

Take an example of deciding what meal to eat for dinner; you may want fries but you are not sure if God’s will is for you to eat fries for dinner.

In the Bible, God asked Noah to build the ark. Noah didn’t have to ask whether building the ark was God’s will or not.

In fact, God specified the dimensions of the ark for Noah and what material Noah was to use to build it.

There are many instances in the Bible where God gave clear instructions of what He wanted His servants to do. This is by far the easiest way to know if it is God’s will for you to do something.

The challenge with this approach is that hearing God is not as straight forward as we wish it would be. I’m sure we wouldn’t be asking this question if God was making instructions clear to us the same way He did for Noah, Moses, David and others.

I want you to note a key concept in this point. When God spoke to Noah about building the ark, He specified some aspects of the ark but many things were left out.

Noah had to decide when to start building the ark and for how long he would build it. It was up to Noah to decide how many days in a week he would work on the ark.

While building the ark, it was up to Noah to decide whether to eat two meals or three meals in a day.

Some aspects of the ark were not specified because the mission of the ark would still be accomplished. It didn’t make much of a difference if Noah ate two meals a day while building the ark compared to if he ate three meals a day.

Therefore, for Noah, it was enough for him to know that God wanted an ark with the specific dimensions that he had been given.

Therefore, you will know doing something is God’s will if He asks you to do it.

2. It is God’s will if it is Written in His word

God’s word is a book of several thousand pages. There is no way such a small book can contain all the activities that people do and tell them whether doing each of the activities is God’s will or not.

Read Also: Why it is God’s Will to Save all Men

In the world today, there are countless sexual perversions. We don’t have to ask if a specific sexually perverse act is God’s will or not.

If you know a given act is perverse, it is considered immorality and it is against God’s will. For acts that may not be obviously ruled as perverse, apply the first point in knowing God’s will.

If God has asked you to do that act, do it. If not, stay away from it.

3. It is God’s Will if God’s Witnesses Approve it

God has witnesses in form of men. His servants know His will. We use the Bible which, humanly speaking, was written by men.

These men wrote the will of God which was revealed to them by the Spirit of God. But you can be sure these servants wrote many other documents that didn’t qualify to be included in God’s will.

Here is where it gets challenging…

A servant of God is only a witness of God’s will if they are submitted to the Spirit of God at the time when they are speaking to you.

Therefore, you can ask a servant of God who is yielded to the Spirit of God to tell you if something you want to do is in God’s will or not.

This is the most common way that God has provided for us to know what is His will and what is not.

If you remember the story of Lazarus and the rich man, then you know that the rich man asked Abraham to send Lazarus to go and warn his brothers not to go to where he was.

Read Also: What is God’s Purpose for my Life?

Abraham replied by saying, “They have Moses and the prophets; let them listen to them.”

We know that God’s will is that all men be saved. Here it becomes clear that God has revealed His will to His servants whom if people listen to them they will know God’s will.

I have shown you three ways in which you can determine if what you want to do is in God’s will or not. God uses all the three avenues to reveal His will to us.

Therefore, yield yourself to the leading of the Spirit of God because it is only through Him that you will be confident of what God’s will is.

If you read the word of God to know His will, it is the Spirit of God who will reveal to you what the word you read means.

Treasure the Spirit of God.