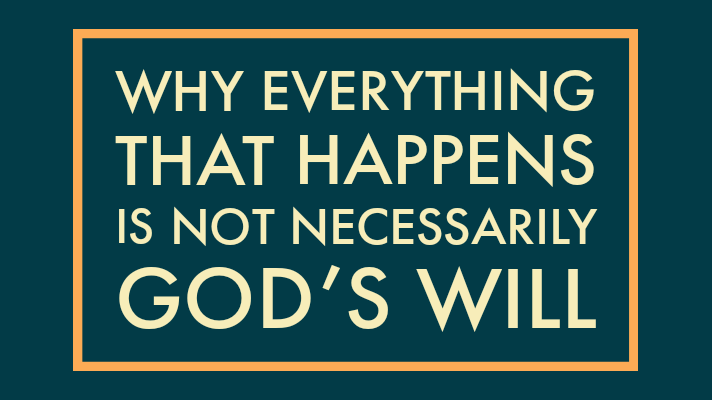 There is a common misconception that everything that happens is God’s will. I have seen people die and mourners claimed it was God’s will for the person to die.

I am here to help you understand how events are affected by God’s will and why not all events that happen are God’s will.

It may be surprising to some people how an event can happen if it is not God’s will yet God is the supreme being. I’ll explain all that in this article.

Why God’s Will is not Always Done

God’s will is good. Since the day God created the earth and all that are in it, He intended good. God gave the first man Adam a garden that had all supplies that Adam needed.

Even when Adam didn’t know, God saw that He was lonely and He made a wife for him. God is loving and His will is for our good.

During creation, God gave Man a will of his own. This is why in the book of Psalms, we are called gods. We are made in the image of God. Just as He has a will, we also have it.

The desire of God was that we use our will to fellowship with Him. But of course giving us a will meant that we had a chance of using it against God.

God knew it but then it was the only way we could fellowship with God in sincerity. The devil also knew it and he saw a good chance to turn men against God.

God’s will is not always done because on earth, His will is subject to the will of men. It is God who gave man authority on earth. Therefore, men can decide to do what is against God’s will on earth even though it is God who owns the earth.

Think of it this way…

You rent a house and put your furniture in it. Though the house belongs to the landlord, you have the right to choose how you will arrange furniture in your house. If you choose to put a bed in the sitting room, your landlord has no right to order you to take the bed to the bedroom.

This is how God’s will operates on earth. God, just like the landlord, may want you to put your bed in the bedroom but you have the final say.

God’s Will and His Law

In court, the will of a person only comes into effect after he dies. After he is dead, it is up to the court to ensure the will of the deceased person is fulfilled. The court will ensure his wealth is divided according to what he wrote in his will.

In case the court decides not to follow the dead man’s will, we know that he can’t rise from the grave to protest. According to the law of death, the dead man no longer has a right among the living.

God’s will on earth is subject to men. If men choose to fulfill it, God will be pleased. If they choose to ignore it, God will be grieved but according to the law, He is not permitted to force men to do His will.

God is the one who came up with the law. The purpose of the law was to govern His creation and set limits. But the nature of the law is that it can work against whoever made it.

God’s Will and the Devil’s Will

The will of the devil is to turn men against God. The will of men is to enjoy life. Initially, God had merged the will of men with His by providing enjoyment for men in His will.

It was God’s will for men to enjoy life, get children and fill the earth. He provided a garden that was good in every way for man.

But then the devil came and deceived man to look for enjoyment outside God. This is why in the world today there are all sorts of immorality all in the name of having fun in life.

It is God’s will for men to enjoy life but then the devil has twisted the definition of enjoying life to serve his evil purpose.

Most people today believe that living for God cannot be enjoyed. When we talk about enjoyment, we automatically think of things in the world.

That is not true.

Many events that happen in the world are actually fulfilling the will of the devil. In simple terms, anything that offers enjoyment and excludes God is the devil’s will.

God’s will is for one man to have one woman and the two are to enjoy intimacy and have children. The devil’s will is to have men misuse intimacy in any form other than the one God ordained.

That is why you see all the perversions that are happening in the world.

Did God know that there would be perversion in the world before He created it? Yes He did.

Why did He create it? Because He loved the idea and He made a redemption plan.

Couldn’t an all-powerful God stop perversion from happening? He could but men permitted it to happen.

God has the power to stop all perversion on earth. That is His will. But then He must use men to stop the perversion. Using men has the challenge of dealing with the will of men.

God once eradicated immorality from the face of the earth using a flood. But it was only possible because Noah obeyed God. By Noah building the ark, the righteous and the wicked were separated and God was able to destroy the wicked without causing harm to the righteous.

God is not helpless with what is happening on earth. The challenge is that men have allowed wickedness to reign on earth using their will but God intended men to use their will to do good on earth.

All the wickedness happening today is a result of the deception of the devil.

Not everything that happens on earth is God’s will. Since men have power to carry out their will on earth, God has to convince men to carry out His will to restore sanity.

The devil on the other hand deceives men to carry out his will. Not all things that happen on earth are God’s will.

Be God’s ambassador by carrying out His will just as Jesus did. You can read more about How to know God’s will in this other article.