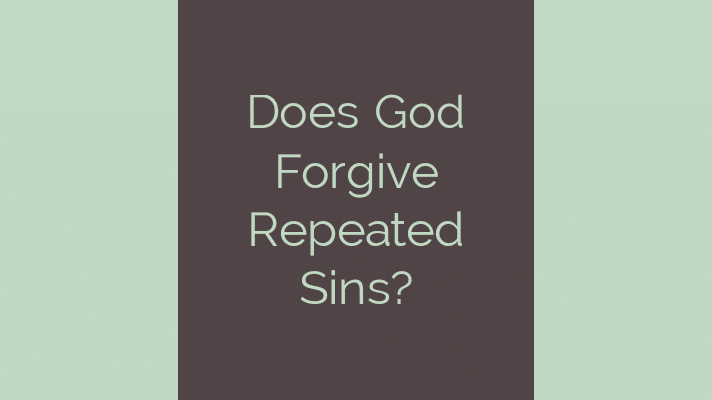 Does God forgive repeated sins? The truth is that God forgives all sins provided the person who committed the sin turns to God in genuine repentance.

But I understand your feeling. In our human nature, when someone wrongs us repeatedly, forgiving such a person becomes harder with each instance.

But with God, His love for us is so great that He will keep forgiving us for whatever sin we have done provided we are genuine in our repentance.

I want to dive deeper into this topic of God’s forgiveness to help you understand how it is possible for God to forgive people of repeated sins.

If God forgives endlessly, why do people end up in hell?

Read Also: What is God’s Will Concerning Marriage?

Well, there are two main reasons why people end up in hell. The first reason is because some people don’t ask God to forgive them. The other reason is because forgiveness of sins is only applicable when you are still alive.

Forgiveness is one of those things that God only gives when they are asked for. I have never heard of a person who asked God for forgiveness and God didn’t forgive.

No matter how grievous one’s sins are, God will always forgive provided the person repents genuinely. God says in His word ‘Though your sins are like scarlet, they shall be as white as snow; though they are red like crimson, they shall be like wool’.

Repeating a sin is definitely annoying in the eyes of God. But then God has assured us that no matter how red our sins are, if we go to Him, He will wash us and make us white as snow.

A good example of people who repeated sin was the children of Israel. God got angry with them for continuously rousing His anger in the wilderness but the Israelites never repented.

Instead, they became worse to the point of blaming God for their misery. Eventually, God destroyed the generation of the Israelites that left Egypt in the wilderness except for Joshua and Caleb.

Repeating sin angers God. But even in His anger, God is still merciful. If a person turns to God in repentance after repeating sin, God will forgive and His anger will cease.

Forgiveness of Sins is for the Living

It is only a living person that can change. Once someone dies, the state they are in when they die becomes permanent.

There is an opportunity for a sinful living person to turn from his sinful ways. This is why God is patient with all sinners.

I hope you remember the two thieves who were crucified with Jesus. One of them, though He had done wrong probably his entire life, at the last minute, asked Jesus to remember him and Jesus promised him eternity.

Read Also: Does God want us to Enjoy Life on Earth?

I’m sure the thief had stolen more than once. And it is likely that this thief had not asked for forgiveness for the many things he stole.

But then when he asked Jesus to remember him, Jesus overlooked all the wrong he did. Maybe it was even the first time that this thief was meeting Jesus.

How much more will Jesus forgive you if you repent?

First, you have accepted Him as your Lord and savior. Secondly, you are remorseful that you have sinned against Him.

Therefore, provided you are alive, ask God for forgiveness and He will forgive you.

Does God Forgive Repeated Sin? Repenting when you know you will Sin Again

I have met people who told me they don’t want to ask God for forgiveness because they know they will sin again. From a human perspective, I agree, it makes a lot of sense.

But in the eyes of God, it is a foolish argument. Here is the reason why…

It is God who forgives sin. This means that it is only God who should tell you not to come to Him for the forgiveness of your sins.

As long as God has asked you to go to Him and He will forgive your sins, go. Your business is to go to God. It is the business of God to forgive you.

Saying you won’t go to God because you are afraid you will repeat the sin you have done is equal to doubting the ability of God to forgive.

Is there any sin that God can’t forgive if you genuinely repent before Him? Has God ever said if you repeat sin a given number of times He won’t forgive you? Of course not.

This means that at all times, as long as you are living, if you go to God and repent, He will forgive you.

Don’t fall for the lies of the devil. The devil can deceive you to postpone going to God to ask for forgiveness until when you run out of time.

Go to God in repentance, He will always forgive you. He is the only one who is forgiving sins after all. No matter how long you postpone, it is still the same God you will go to for forgiveness.

Repent until you get tired of sinning.

Struggling to Believe God has Forgiven You

Do you know why?

Because Jesus already knew all the sins the thief had done. Jesus didn’t need to hear the sins from the thief’s mouth.

God already knows all the sins you have done. You don’t have to count them to Him. He is only waiting for you to acknowledge that you have done wrong.

Immediately you acknowledge that you have done wrong, God will have mercy on you. Read more about how God’s mercy operates in this article.

If you confessed your sin, you are already forgiven.

If you repeated the same sin and confessed it, God forgave you.

Once you have confessed the sin you did before God, forget about it. I know the devil will want to pile guilt on you but you must resist the guilt.

Keep saying to yourself ‘I confessed it. God has forgiven me’. Say it until you have no more guilt.

The good thing with forgiveness is that even if you struggle to believe that God has forgiven you, provided you confessed your sin to Him, you are already forgiven.

The rest is just the devil trying to make your life miserable. Order him out of your life!

The easiest way to stop sinning is by acknowledging that Jesus paid for your sins. The more you learn about Jesus, the harder it will be for you to sin.

If you are repeating a certain sin, it is because you are yet to know a certain dimension of Jesus. You have to know Jesus to the point that you can’t afford to do anything that annoys Him.

If you can still sin against God, it is because your level of understanding God is not sufficient to stop you from sinning.

Take an example of Joseph the son of Jacob in the Bible; when Potiphar’s wife wanted to sleep with him, he refused. The reason he gave was that he couldn’t do such an evil thing against God.

In simple terms, build a sweet relationship with God to the point that you can’t trade it for any ‘sweetness’ of any sin.

Growing a relationship with God takes time. Do your best to grow in the knowledge of God.

May God help you!