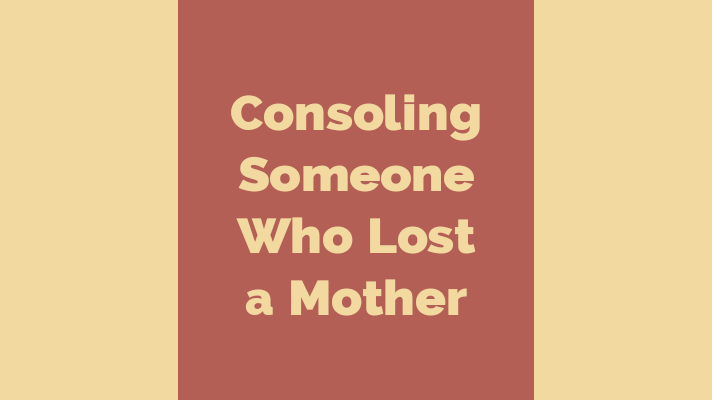 Consoling someone who lost a mother can be challenging. You need to handle the situation with great care.

In this article, I will tell you what to say to someone who has lost a mother to console them, how to say it and what not to say.

Consoling Someone who Lost a Mother

I am deeply saddened by the loss of your mother. She was a good mother to have raised someone as good as you. May her soul rest in peace. As you go through this period of grief, my prayers are with you. I pray that God will be your comfort.

You will rise from this experience stronger than before. Take heart dear! Be strong for your mom. Carry on the good legacy she began. I believe in you!

The first thing you want to say in consoling someone who lost a mother is how the death of his mother has affected you. Begin by expressing your genuine sorrow.

If you don’t feel sorrowful that someone close to you has lost a mother, then don’t say it. It is annoying for people to tell you they are sorry for the loss of your mother when you can clearly see that they are not sorry.

Read Also: 3 Consoling Gifts to buy for someone who Lost a Mother

Make sure that your expression of grief for the loss of someone’s mother is genuine.

If you are not close to the person who has lost her mother, you can send a text message. Only call the person if you normally talk on phone. The golden rule in choosing the mode of passing the message of grief is by using the method you mostly use when talking to the person.

If it is possible for you to deliver your message of grief in person, do it.

Talk a Bit about the Deceased Mother

When you are consoling someone who lost a mother, make sure you talk a bit about the good moments you had with your friend’s mother.

You can talk about the first time you met her mother and what went through your mind. Make sure that you only mention the pleasant moments you had with the deceased mother.

Let your observation be genuine. If you have never met the deceased mother, don’t force yourself to talk about her. You can use the statement I have used in the example above; ‘She must have been a good mother to have raised a good person like you’.

If you had a personal relationship with the deceased mother, tell your friend how you will miss her.

The aim of talking about the deceased mother to your friend is to make your friend know that it is not only him who is feeling the loss but also you.

Once your friend knows that you are also affected by the death of his mother, he will feel much better.

Console your Friend who Lost a Mother

There is always a positive side to every event. Losing a mother is a painful experience but on the flip side, it makes people stronger.

When someone you know has lost a mother, they are probably feeling life for them has come to an end. In their grief, they can barely see any good thing.

It is your duty as a fellow mourner to assure your friend that despite the grim situation, there is hope.

Read Also: 3 Things you Miss when your Mom Dies

In my example above, I have mentioned that the experience will make the bereaved person stronger. Be confident while consoling your friend.

Show through your demeanor that you believe in your bereaved friend to come out of the tough season stronger.

At the end of the day, it is up to the bereaved person to work his way out of the grief but your faith in him is a good motivation.

Your expectation of them to be strong after the loss of their mother will push them away from pity parties.

Of course you have to allow them to mourn freely the first few days before you start encouraging them to be strong.

One of the best ways to motivate someone who has lost a mother is by asking the person to carry on the good legacy that the mother has left.

If the bereaved person really loved his dead mother, he will have a stronger urge to continue the good work that his mother left.

Consoling Someone who lost a Mother: What to Avoid Saying

You will meet her in Heaven

Avoid talking about the bereaved person meeting his mother in the afterlife. One of the reasons is because it is hard to verify the truth in such a claim.

Someone who has lost a mother doesn’t have time to think about the future. Such a statement will bring more sorrow since he will be forced to think of his own death too.

Your friend may also not be a believer in meeting people after death. Since each person has his own beliefs about what happens to those who die, it is wise to keep off that topic.

I will always stand with you

Avoid making this and any other promise as a way of consoling someone who lost a mother unless you are sure you will fulfill the promise you are making.

Whenever we see someone in sorrow, we get tempted to make promises. There is nothing wrong with making promises to someone who has lost his mother but since most promises go unfulfilled, it is wise to avoid them.

If you have purposed to stand with the person through the difficult time, let them see it through your actions.

Making a promise to someone who has lost a mother and failing to fulfill it will cause the bereaved person more pain.

Your presence is sufficient. Don’t fall for the temptation of making a promise so that you look like a good person.

In an attempt to console someone who has lost a mother, don’t ask the person to stop crying. Instead, encourage them to mourn their mother in the best way they know how to.

Read Also: Dreams  I had after Losing my Mother: Grief Dreams

In most cases, someone who has lost a mother will want to talk about his relationship with the deceased mother. Offer them an ear.

If the person weeps from time to time while talking about the mother, allow them to weep. Your work is to listen to them and assure them all will be well.

Consoling Someone who Lost a Mother: Conclusion

Consoling someone who lost a mother is a delicate affair. You must pick the right words and say them in the right moment.

A little mess in your words can cause the bereaved person more pain. Let your words be few. If you are not sure whether you should say something or not, don’t say it.