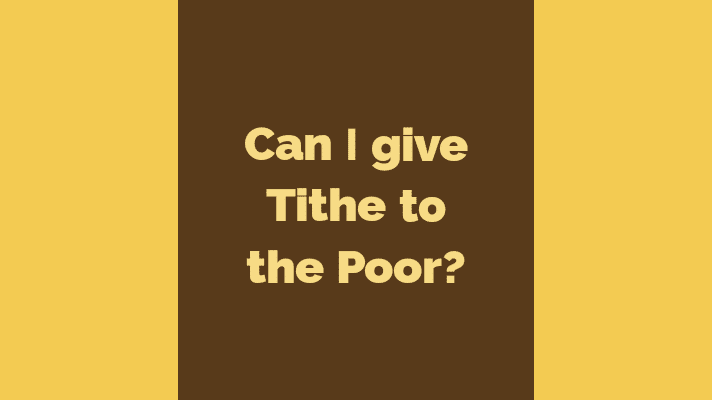 No. Tithe by definition is a tenth of your income or in the old days it was a tenth of the harvest given to the Lord not a gift for the poor. The purpose of giving tithe was to acknowledge that God is greater than the harvest you have received.

God would in turn guard your harvest against the devourer. This was more of a motivational factor to encourage us to give tithe.

You can’t pay tithe to the poor because there is a specific offering that God asked us to give to the poor and it is different from tithe.

An offering given to the poor is called alms. God requires us to pay tithe to His house but for alms, we choose how often we want to give and the quantity.

In the Bible, we are told of the story of Cornelius whose offering of alms to the poor touched God. God acknowledges alms and blesses those who give.

Jesus told us that those who feed and clothe the poor are feeding and clothing Him. We are also told that whoever refreshes others will be refreshed.

If tithe is given to the poor, then it is no longer tithe but alms. And since tithe and alms are different gifts to God, each has its own reward.

The best you can do is to give both tithe and alms if you really want to help the poor. Giving tithe to a church that has a lot of money doesn’t make it any less effective. You give tithe for your own sake.

Even if the church you tithe to mishandles money, God will reward you for being faithful with giving your tithe.