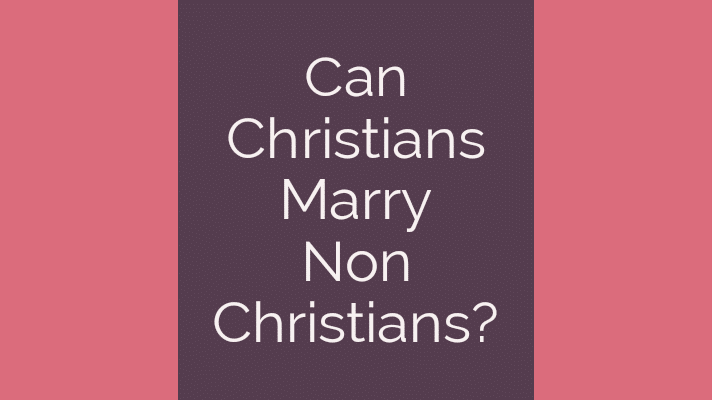 Christians can marry non-Christians. It is not a sin but it is unwise. Marriage is an intimate affair that makes two people one.

If a Christian unites himself with a non-Christian, it will be harder for the Christian to practice his faith than if he married a fellow Christian.

All humans are children of God and marrying any of them is not a sin. But if you marry someone that will kill your faith in Jesus, that is foolishness.

The same thing happens today; marrying someone who doesn’t believe in Jesus as the Lord and savior, is equivalent to an Old Testament Israelite marrying a Canaanite.

The marriage will quickly drain the faith of the believer.

Some Christians may argue that they can keep their faith despite marrying a non-Christian. We can’t deny it but it is highly unlikely.

The non-Christian you marry will be an easy target for the devil to use to drain your faith. Take an example of the case of Job and his wife; Job trusted God even after losing everything but his wife asked him to curse God and die.

Job didn’t give in to the persuasion of his wife but it was a temptation that could have been avoided if Job’s wife had the same faith that Job had in God.

It is better to lose a lover than to lose your soul.

If you are a non-Christian and you want to marry a Christian, convert to Christianity then marry.

Don’t fall for the trap of marrying a non-believer if you are a believer. Your faith in Jesus is too precious to take such a risk.