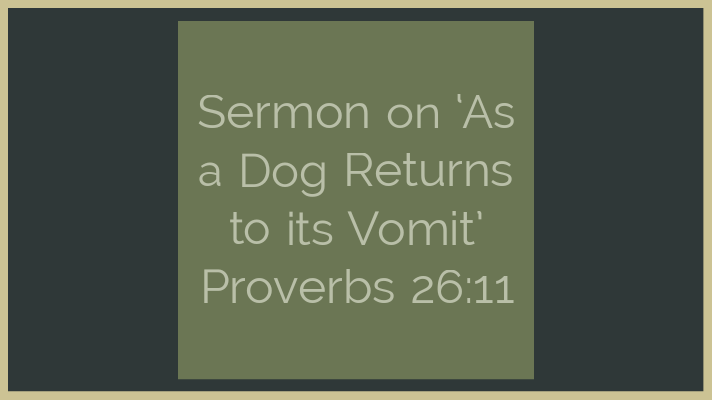 People may disagree on many opinions but about a dog that returns to its vomit, we all hate it. The word of God in proverbs 26:11 likens the act of a fool repeating his wickedness to the act of a dog eating up its own vomit.

As disgusting as it sounds, you will be surprised to realize that many times you have been a dog that returns to its vomit. This is a call from God for believers to be aware of the danger of not hating wickedness.

For a strong believer who actively seeks the Lord, it may seem as if this verse doesn’t apply to him. I once had the same thoughts but then God revealed something to me.

I had a dream and in the dream I met a girl I was once in a relationship with several years ago. Casually, she suggested that I sleep with her (I was very born again even in the dream).

Though I didn’t say yes to it because I knew it was wrong, I was open to doing it. I didn’t detest it. Then I woke up.

I felt so ashamed of myself that though I actively seek God, I still had the willingness to return to the wickedness I was once in.

How many times have you known that something is evil but somehow you couldn’t gather enough hatred for it?

Joseph was nagged day and night to sleep with Potiphar’s wife. Every time he said he cannot do such a wicked act and sin against God.

When Potiphar’s wife used force to get him to sleep with her, he fled leaving behind his cloak. Potiphar’s wife then turned the story against Joseph and he ended up in prison.

What is this special thing that Joseph had that many men lack?

Hating wickedness is a gift from God.

Yes, unless God grants you hatred for evil, you will never hate it. David in Psalms 51 confesses that he was conceived in iniquity. How then could he hate the wickedness he was about to do when he saw Bathsheba naked?

He liked the iniquity that he was conceived in even though he didn’t say it aloud.

The Bible when referring to the devil it says ‘…until iniquity was found in you.’ The devil, though a high ranking angel in the presence of God, gave in to the iniquity that was in him.

In 1st John 1:5, the Bible states that God is light and in Him there is no darkness. But about men, John, in John 3:19 writes ‘Men loved darkness.’

Provided you are human, you will love darkness until Jesus who is the light of the world comes in your life.

Read Also: The Role of Compassion in your Life as a Christian

That is proven true by what is written about King Asa.

17 Although he did not remove the high places from Israel, Asa’s heart was fully committed to the Lord all his life.

The heart of Asa was FULLY committed to God yet he didn’t remove the altars of the foreign gods. A believer may be righteous and walking blamelessly before God but he has no hatred for evil.

God, through prophet Ezekiel, made it clear that whoever is sent to warn a wicked person must do so or else the blood of the wicked person will be on him.

8 When I say to the wicked, ‘You wicked person, you will surely die,’ and you do not speak out to dissuade them from their ways, that wicked person will die for their sin, and I will hold you accountable for their blood.

Where will you get the courage to rebuke evil if you have no hatred for it? You may even be tempted to join in on the evil.

We all know the famous story of King Saul who was sent to COMPLETELY destroy the Amalekites but he spared their king and the fat animals. Because of that single act of disobedience, the kingdom of Israel was removed from his lineage.

It is strange that some believers have pity for the devil. How can such a believer cast out a demon? If you tell lies, how can you rebuke the devil yet you are using his language?

If your heart condones immoral desires, how will you overcome sexual temptations when they come?

Read Also: Divisions among Believers: What you need to Know

Jesus said He is the vine and we are the branches and that we can do nothing without Him. You can’t hate evil with the intensity that Jesus hated it without receiving the grace to hate evil from Him.