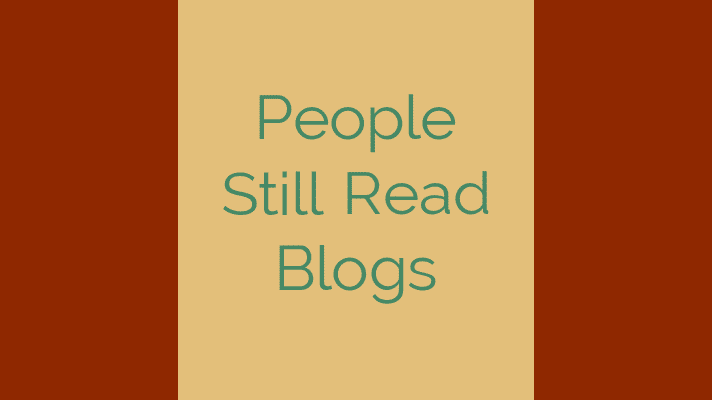 Blogs are not as ancient as some industries in our economy. Blogs only came to life when most of us were born or were being born. But blogs have taken off and there are no signs of their end.

When you search for any topic on Google, you will come across multiple blogs addressing your search query. There are hundreds of blogs about almost any topic you can think of.

Some blogs have taken the educational approach while others lean heavily on the entertainment side. We have a few blogs that are dedicated to mysterious topics; nerds love them.

While the internet has evolved and more exciting things have come up, blogging has not been phased out. Blogs are still a thing.

Are Blogs Still a Thing?

Blogs and their Competition

Blogs dominated the internet for a while. In the early 2000s, blogs were the go to places on the internet. It was an exciting feeling to follow the life of someone from a different continent in real time.

The excitement around blogs made many people create their own. Blogs became a thing and the internet has never been the same again.

But as more people joined the bandwagon, blogs began losing their glory. The biggest blow to blogging came around 2010 when social media platforms started taking off.

Though social media channels like Reddit were already popular, people still followed blogs since the internet had few things to offer.

In those days, you were either on MySpace or you were following a certain blogger. But then when Facebook showed up, things changed.

Also, on Facebook you could follow the lives of many people a lot more easily compared to following individual blogs.

Blogs began losing some of their glory to the social media platform of the day.

Rarely will you hear people talking about blogs they follow. In most cases, you will only hear people mention the social media channels they are on.

Bloggers joined social media when they realized that social media platforms were taking over. Bloggers began asking followers to read their blogs on social media.

Things have now evolved to a point where some former bloggers don’t see then need to run their blogs. They prefer to just interact with their followers on social media.

Social media channels dominated the internet from 2010. But towards the end of the decade, video sharing platforms came to the scene.

Instead of reading updates about people’s lives, you could watch them as they lived out their lives. All of a sudden, everyone was making videos about their lives.

Social media channels saw they were facing competition they had no chance against. Most of them introduced video sharing on their platform.

But by the time social media channels started video sharing, YouTube had already taken the internet by storm.

Former bloggers and social media influencers had YouTube channels. As of now, YouTube and other video sharing platforms are slowly but surely phasing out text based social media channels.

The Resilience of Blogs

Despite stiff competition and being out shadowed, blogs have managed to survive into this age. Blogs are still huge today. You may not see them trending as videos do but they have loyal followers who never abandoned them.

Whenever the internet shifted, majority of people who had joined and found blogs to be a thing never shifted. Most of the people who shift to new platforms are new internet users.

Since the internet is growing, new comers end up on the trending platform of the time. Just as blogging was the thing in the early 2000s, so was social media after it.

The number of people who joined the social media wave may have been greater than those who had joined the blogging wave. But blogs were never phased out completely.

As of today, there are massive blogs that most of us read but rarely follow faithfully as we do social media personalities.

The resilience of blogs came at a cost; no longer do blogs thrive in sharing about personal lives. Rather, their success is heavily inclined on educating their readers.

Tech blogs are all about teaching readers on how to use new tech and upcoming trends. Gardening blogs teach readers how to manage their own gardens.

Design blogs teach aspiring designers how to make a living in the field. It is the educational aspect of blogs that has kept them afloat.

The Future of Blogs

Blogs are still a thing despite the internet having more exciting things. In the coming years, it is rare that blogs will make a huge comeback.

Blogs will likely take the route of physical newspapers; they will stay around until the people who were born in their era are gone.

The same trend will happen with blogs; those who were born in the age of blogs will keep reading them until they are gone.

Once they die off, blogs will disappear with them.

But that will happen many years to come. Blogs are not going anywhere anytime soon. In fact, blogs are likely still in their youthful stage.

Who knew that newspapers would survive the wave of the internet? The internet wave hit hard but newspapers didn’t die off at once.

If you aspire to start a blog, it is still early enough. Go for it. This is the age of blogs even though they may not be the biggest thing on the internet.

Millions of people on the internet read blogs. Though majority may not be loyal followers of blogs, they certainly read blogs.

The most important thing is for you to know the trend in blogging. Starting a blog that talks about your life may not stand a chance in the current internet environment. But an educational blog will certainly do well.

A percentage of the population love reading text as opposed to watching videos and being on noisy social media channels.

You can take advantage of such a population and write blogs. Here is a blogging guide if you are interested in starting your own blog.